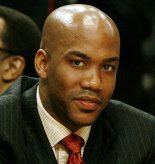 It would be hard to find a more unsympathetic fellow these days than Stephon Marbury. OK, maybe Plaxico Burress.

But in the NBA, the Knicks’ once and no longer future point guard has become the symbol of selfishness as he awaits the dissolution of his relationship with the team. That could come as early as Monday, when Marbury, Knicks basketball boss Donnie Walsh, and a lawyer from the players association are scheduled to meet to see how much of Marbury’s $21.9 million the player is willing to sacrifice to get his release.

No one really looks good in all this. Once the Knicks announced that Mike D’Antoni was going to be the new head coach, Marbury, in essence, became a Dead Steph Walking. He did play in the exhibition season – he had 14 points in 29 minutes against the Celtics in Boston – but once the bell rung on the 2008-09 season, Marbury turned into Mr. Inactive. The next minute he plays will be the first this season.

By all accounts, he is healthy to play. By all accounts, the Knicks have decided they don’t care; they want him gone. So, apparently, do Marbury’s teammates, none of whom has come out and said that the self-proclaimed best point guard in the NBA is getting the proverbial shaft.

But when push came to shove last week, after two trades decimated the New York roster, D’Antoni said he asked Marbury to play against the Pistons simply as a manpower issue. According to the Knicks, Marbury declined, which led the Knicks to fine Marbury $400,000, a fine that is being appealed. (Marbury has a somewhat different interpretation, but he remained on the bench nonetheless.)

With the benefit of hindsight, always helpful, the Knicks allowed this thing to become a daily distraction when they easily could have resorted to a number of maneuvers while still having the same outcome: no Marbury. But by having him sit on the bench during games, travel with the team, and then be in a position to diss the coach, the Knicks more of less invited this to happen. How could it have been avoided? Here are two ways.

1. The Jamaal Tinsley Approach: The Indiana Pacers, Walsh’s previous employer, haven’t done a whole lot right these past few years, but they have drawn a line in the sand with their own point guard, who, like Marbury, is persona non grata.  Tinsley has yet to play this season as well and, like Marbury, is healthy. But that’s where the similiarities end. The Pacers announced in September that they were not buying Tinsley out, that they were going to try and trade him (two months later, nada on that front) and that he is free to work out by himself, apart from the team. He has not been with the team all year.  (Barack Obama spent more time in Indianapolis in October than Tinsley did.) But ‘out of sight, out of mind’ has its advantages, one of them being that the player can’t refuse to enter a game at which he isn’t even present or in uniform. Had the Knicks chosen this route with Marbury, they at least would have been spared the daily Steph queries from the New York press and would have avoided the Detroit incident. Who knows, they might even have found a taker for him by now.

2. The Frank Brickowski Approach: Here’s a blast from the past, but an instructive one nonetheless. If you don’t want a guy around, tell him to leave. Period. This is what happened with Brickowski during the 1996-97 season when he ended a long and occasionally productive career – 731 games over 12 seasons with six teams – as a member of the Boston Celtics. At that point in time, ML Carr was running the Celtics and he was determined to steer them to the league’s worst record and the best statistical shot at Tim Duncan in the lottery. He pretty much succeeded; the Ping Pong balls just didn’t deliver. One of the many personnel moves Carr made that season was to send Brickowski packing after only 17 games and 255 minutes of action. The official bulletin from the team said that Brickowski was sidelined with a sore right shoulder necessitating an operation, but no one really believed it. The command from on high to Brickowski was take the year off and chill. So that’s what Brickowski did, often times spotted on Cape Cod, not to be confused with the local physical therapy office. He was a free agent signee and was promptly renounced the following July. But the goal was to get him away – and it was a rousing success.

The lessons from the above two scenarios cut right to the core of the Knicks’ situation with Marbury: if you don’t want the guy around, don’t have the guy around. Let him go to Vegas if he so desires; he won’t care as long as the checks are still good. He will still be a name, if not a face, on the roster. And the team can do what it wanted to do anyway, namely, start developing the other players without a guy (a) you don’t want around and (b) is going to be gone for good next year anyway. And it’s not exactly like the Knicks are, you know, trying to win games now. They’re fixated on 2010.

There’s no real trade value for Marbury, not now anyway. Had the Knicks played him and let others see what’s left, maybe they might have been able to do something. Marbury does possess one of the truly valued commodities in the league: the ever-in-demand expiring contract. But with a divorce on the horizon, no one is going to take on Marbury’s contract now. Many teams wouldn’t take on Marbury at any cost, which is probably going to be evident when he does extricate himself from his current situation and becomes a free agent. His track record just isn’t all that overwhelming.

In choosing to defy his coach and team, Marbury put his own stamp on this regrettable saga, one that, unfortunately for him, confirmed what many have long suspected about him. But the Knicks never should have let it get to that point. They knew long ago that Marbury wasn’t going to be a part of their plans. Why they allowed him to stick around and still be seen and heard  – instead of in exile – remains a head-scratcher to this day.