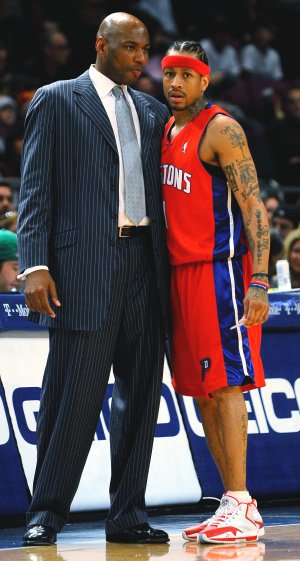 I never was much of a math expert, but I know the difference between 4-0 and 7-8. One conveys dominance. The other conveys mediocrity.

Added together, they pretty much convey the current state of the Detroit Pistons, no longer dominant, or close to it, and bordering on that untenable state of being average in a league where it helps to be really good or really bad.

It’s sort of like applying to college. If you’ve got the money (really good), you can afford it. If you don’t (really bad), there’s scholarship money. But if you’re stick in the middle (going nowhere), you are toast.

This is not to imply that the newly reconfigured Pistons, with Allen Iverson and without Chauncey Billups, are toast. They’re more like zwieback. While we will continue to cut them some slack because of their big deal, they nonetheless appear to be a team that has recognized it has run its course and needs to retool.

I’ve always put Joe Dumars on the Mt. Rushmore of current GMs, where he trades top spots with San Antonio’s RC Buford. Detroit has made six straight trips to the conference finals. It has had seven straight 50-win seasons. That’s an accomplishment in and of itself. And, chances are, the Pistons would have rattled off another 50-plus wins this season had Dumars not pulled the trigger on the Iverson-Billups trade last month.

But my guess is that if you convinced Dumars to swallow some truth serum, he’d admit that he didn’t think the group that left training camp had enough to overtake the Celtics (or, maybe, even the Cavaliers) to get to the NBA Finals. Let’s face it, that group, one way or another, already had coughed up golden opportunities in 2006 (losing to Miami with the homecourt advantage), in 2007 (losing to Cleveland with the homecourt advantage and after taking a 2-0 lead) and in 2008 (losing to Boston after beating the Celtics on the road in Game 2 of the Eastern Conference Finals.)

Doing that again, or even failing to even get that far, was a distinct possibility this season for the Pistons, who have twice been flogged by the Celtics already (although, to their credit, they’ve also beaten the Lakers in Los Angeles, the Spurs in San Antonio, and the Cavs). They’ve already lost four home games – including one unmentionable, a 26-point humiliation to the hapless Timberwolves. They didn’t lose their fourth home game last year until Jan. 18 – and they lost only seven all season at the Palace.

Who knows how Dumars reached that decision, but I think it’s the right one. I don’t think the Pistons, even with Rodney Stuckey improving and Antonio McDyess back in the fold, had enough to beat the Celtics. I’m not sure they have enough to beat the Cavs, either. And given the height of the bar in Detroit, that prompted Dumars to do what he did.

He didn’t Knicks/Nets/Everyone Else it and pack it in with a big circle on 2010. He acquired a future Hall of Famer and financial flexibility down the road. In the meantime, he still has a competitive roster with possibilities, so that’s what makes the Pistons impossible to dismiss or ignore.

On the other hand… Iverson hasn’t been on a team which won a playoff series since 2003 and remains a difficult guy to accommodate. There simply is no one else like him, which can be good and bad… Rasheed Wallace appears to be putting a 42-cent stamp on more games than ever; this from a guy who submitted the ultimate no-show in critical Game 6 of the Eastern Conference Finals in 2008 (4 points, 5 fouls, 2-of-12 shooting). History may show that Larry Brown was the only coach who could penetrate the Inner Sheed. With Wallace’s contract up at the end of the season, you’d think he’d put the stamps in the drawer and just play.

But that makes sense. And, let’s face it, Michael Curry is a rookie head coach, with no previous head coaching experience, taking on a savvy group of veterans who know the drill. When’s the last time that worked? (OK, it almost worked for Dallas, but Avery Johnson wasn’t a real rookie).

The Pistons fell to 7-8 with Iverson following an embarrassing Sunday afternoon loss to the Knicks in New York, a game in which they fell behind by an astonishing 29 points. NBA rules dictated that Detroit be in the Big Apple the night before the game. Other than Atlanta, and possibly Golden State, there is no more worrisome city in which to arrive the night before a game than New York. Even more worrisome was the fact that the teams played a matinee.

But that was one loss. Let’s face it, the Pistons are a team in transition. You can’t write them off. But they’re also a team with options, which is what the Iverson-Billups deal was all about. Better to trade a player while he still has value, even if it might mean taking a step back before you go forward again. Just ask the Celtics or the Bulls how it works when everyone of import says good-bye at about the same time.

The Pistons no longer loom as the toughest test for the Celtics. That role, right now, belongs exclusively to the Cavaliers. By May, it could all be different, which is what Dumars might be hoping. But, either way, he’ll be in a position of strength when the season is over with both Iverson and Wallace potentially off the books.

And with what he has remaining on his roster, well, let’s just say it’s probably going to be a lot more than most anyone else will have in 2009 to offer marquee free agents. Or, perhaps, in 2010. As someone once noted, “you need to break a few eggs to make an omelet.” In other words, Dumars might end up losing the battle, a battle he really had no shot of winning anyway, but, in the end, he also just might end up winning the war.