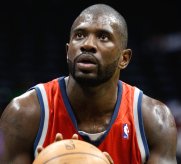 Bell, whose averages are down to 9.6 ppg and 2.9 rpg this season, had been widely rumored to be on the verge of being traded the last few days.