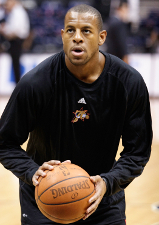 Few teams received more accolades during the offseason than the Philadelphia 76ers. Coming off a late-season run, earning a playoff berth, extending the heavily favored Detroit Pistons to six games and then enjoying what appeared to be a wildly successful offseason makeover, the bar was raised considerably.

So the Sixers definitely felt they upgraded the talent pool and there was talk about possibly being among the top four in the Eastern Conference.

As most know, the expectations and team spirit became deflated by a 9-14 start that eventually cost coach Maurice Cheeks his job.

Cheeks was replaced by long-time Sixer employee Tony DiLeo, who will guide the team for the rest of the season, according to Stefanski. DiLeo hopes to change the culture while adding a few more W’s. His biggest goal is to get the Sixers back to their fast-breaking ways.

Was Cheeks made the scapegoat for the Sixers’ poor start?

Sure, but as the old saying goes, you can’t fire the entire team, although several Sixers players are certainly worthy of receiving termination notices.

Cheeks was known as a players’ coach. He never put one of his players under the bus, always taking the blame.

And the fact that the Sixers started slow continued a pattern under Cheeks, so he did indeed receive blame.

Last season the Sixers started out 18-30 and eventually righted the ship, going 22-12 after that and earning the No. 7 seed in the Eastern Conference playoffs.

This year Cheeks wasn’t given the benefit of the doubt with the Sixers languishing through the first quarter of the season.

“It’s not just the coach’s fault,” Stefanski said. “It’s a change of direction and we felt we had to do it and go in a different direction and felt progress wasn’t there.”

The question now is, what type of team has DiLeo inherited?

Both Stefanski and DiLeo said how they hoped to make the Sixers more of a transition team, something that helped them claim that postseason berth last year.

Yet as they showed in the playoffs, teams can rarely win in the postseason with this style.

The running masks the Sixers deficient perimeter game. Without better shooting one wonders how much better the Sixers will become.

There could be natural improvement if the players actually live up to expectations.

Brand has been a disappointment even though he’s averaging a double-double (16.4 ppg., 10.0 rebounds).

He missed all but eight games last season with a ruptured left Achilles tendon and has played like somebody still attempting to shake off the rust.

The other thing about Brand that one has to wonder is whether the expectations were out of control, despite his big contract.

This is his 10th NBA campaign and he has played eight full seasons, with only one playoff appearance. Granted Brand played on some horrid teams with Chicago and the Los Angeles Clippers, but it’s still a less than impressive postseason resume.

Iguodala has also played below his standards until recently. He was switched from shooting guard to small forward and that has seemed to help.

The biggest disappointment has been center Samuel Dalembert, averaging 5.8 points and 8.3 rebounds.

Dalembert has been known for his inconsistency, but last season he played well, averaging 10.5 points, 10.4 rebounds and 2.3 blocks in a career-high 33.2 minutes per game.

“We have to get Sam playing at a high level,” DiLeo said in the season’s biggest understatement.

Andre Miller has been solid at point guard, but he’s an unrestricted free agent after this season and if the team doesn’t show significant progress, it won’t be a good selling point to keep him.

Williams, who has the ability to create instant offense off he bench, has been inconsistent. Actually the Sixers’ best player has been second-year forward Thaddeus Young (13.1 ppg.).

Besides Brand, the Sixers other off-season acquisitions have given minimal contributions.

Whether it’s a coincidence or not, Brand and Dalembert played well in DiLeo’s first game, a 104-89 win over the visiting Washington Wizards. Brand had 27 points (12 for 19 from the field) while Dalembert added five points and 17 rebounds.

Those two must be able to mesh together on the court both offensively and defensively for the Sixers to improve.

With the woeful shape of the Eastern Conference, the Sixers should still contend for a playoff spot.

Yet just contending for one of the back-tier positions wouldn’t be a sign of progress. The Sixers are looking for major improvement.

Changing coaches won’t do much unless the players who are expected to produce, can considerably step up their game on a consistent basis.