How much is too much?

How much is too much? 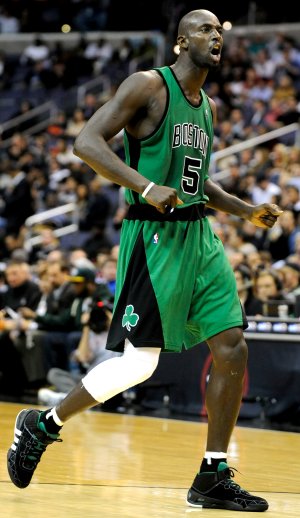 Kendrick Perkins leads the NBA in technical fouls. He has nine, or as many in 24 games this year as he accrued all last season. Two teammates (Kevin Garnett and Paul Pierce) have three apiece, putting three members of the defending champs among the top 10 involuntary contributors to David Stern’s coffers. Sam Cassell has two technicals and one ejection. The next minute he plays this season will be his first.

They’re not alone. Their coach, Doc Rivers, is tied with Charlotte’s Larry Brown among coaches who have been whistled for the most technical fouls: each has four. (The numbers are based on information from the NBA and are through Dec. 4).

But as much as the Celtics are piling up technicals at a somewhat alarming rate – particularly for the combustible Perkins – there’s also been at least two instances this season where the always voluble, demonstrative Garnett seemed to be taunting or egging on an opponent – in other words, on the verge of a technical – and came away unscathed.

The first was when he clapped at the Raptors’ Jose Calderon all the way up the court in a Nov. 10 game in Boston. Nothing happened, save for some spirited jawing, of which Garnett is the undisputed league champion. The other came Dec. 5 in a nationally televised game against Portland, in which he got down on all fours in front of Blazers’ rookie Jerryd Bayless as Bayless began to bring the ball up the floor with just under five minutes remaining in the game.

“I have never seen anything like that before in my life,’’ said the ESPN analyst for the game, former NBA player Mark Jackson.

Actually, Garnett has done it before. More than once. Rivers admitted that if Garnett had tried to do that to him when he was playing, “I would have run him over. Legally of course.”

But now that he coaches the defending Defensive Player of the Year, he sees it as well, veteran exuberance, which should be applauded, not criticized.

And certainly not penalized.

“He does it all the time,’’ Rivers said of Garnett going to the floor on all fours. “And I bet he doesn’t even know it half the time because he gets so caught up in the game. But I look at that and say, ‘isn’t that great?’

“One referee said to me, ‘you better watch Kevin.’ And I said, ‘no, you guys should watch Kevin – and tell the rest of the league to do it.’ Wouldn’t every coach want their guy to get down low on defense, pound his hands on the floor, and be so into the game? When Duke does it, everyone starts clapping. When Kevin does it, people want to give him a tech. He’s so wrapped up in the game. I don’t have a problem with it.”’

The officials didn’t either, at least not in those two instances. Rivers said he thinks it’s because the officials can hear what the fans can’t hear.

“The reason I think a lot of the officials don’t T up Kevin is that it’s not a personal thing with him,’’ Rivers said of Garnett. “Heck, half the time, he’s talking to himself. They hear what Kevin is saying and they know it doesn’t lead to anything. With others, it’s more direct and personal. He has done that his whole career.”

And Garnett is indiscriminate. He barked at teammate Glen Davis in that same Portland game, so much so that Davis retreated to the end of the bench and put a towel over his face. Garnett had not been happy that the Celtics reserves had let Portland back into the game, necessitating the return of the starters (and the down-on-all-fours move against Bayless).

Nonetheless, Garnett’s in-your-face style – and the Celtics’ new hubris – have made them unappealing to many others around the league. That’s being charitable. The Blazers’ Channing Frye told the Oregonian, “the Celtics – they irritate everybody.” But, he quickly added, the Celtics also can afford to be arrogant because they have what 29 other teams want.

And that fact, Rivers thinks, is why there is more attention on his players (and himself). He noted that Garnett hasn’t morphed into this personality since coming to Boston. It’s just that it’s more noticed because the Celtics are the defending NBA champs and on every team’s hit list this season.

“Our games are on more of an edge than most games,’’ Rivers said. “We’re the champions. Teams are really going after us, not just physically, but verbally and emotionally as well.”

Perkins, so far, has been most penalized of the defending champs. In the NBA most recently compiled NBA statistics, Perkins had three more technicals than anyone else in the league. And Rivers, who had only seven technicals last season, is more than halfway to that number with more than two-thirds of the season left to be played.

“In Perk’s case, I think up to five techs have been double techs,’’ Rivers said. “That’s where I have a problem. I wish the refs would do their jobs better. They know who instigated it. They know who was talking. Give him the tech. The easy way out is to placate both coaches by handing out double techs. I’ve always thought that’s the lazy way of doing it. And I’ll bet that seven out of 10 times, they know who perpetrated it.”

Rivers is concerned that Perkins might get too close to the Rasheed Line, where a technical foul would result in an automatic one-game suspension. But he’s a bit away from that number yet (16) although there are still a lot of games to be played.

“Perk has to be careful because I’m sure he’s a targeted guy,’’ Rivers said.

The Celtics expected everyone’s ‘A’ Game when the season started. That goes with the territory of being the defending champion. In their first 24 games, they won 22 of them. So, in their view, whatever Perkins and Garnett are doing, it doesn’t seem to have had much impact in the standings.

And at the end of the day, that is what matters to them.