Breaking the fun machine in Phoenix

Breaking the fun machine in Phoenix 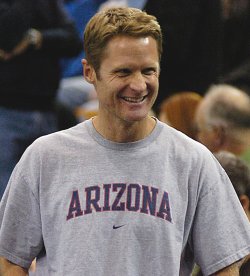 Jordan, you may recall, punched Steve Kerr in the face in a 1995 Chicago Bulls practice.

Kerr, as I remember, had the audacity to stand up to Jordan during one of those scrimmages where His Airness was heaping abuse on teammates.

Kerr is the GM of the Suns these days, and it seems he’s up to his old tricks.

And this is where things get dicey. If you loved the old Suns regime led by the mad scientist of basketball, Mike D’Antoni, then you probably want a shot at Kerr yourself.

On the other hand, if you’re less of a dreamer and you subscribe to what, 75 years of basketball precedent and history? If you do that, then you’re probably inclined to agree with Kerr that if the goal in the NBA is to win a championship, then the Suns probably needed to change to a philosophy that actually has a chance of producing that outcome.

The circumstances make for a fascinating debate and one very ugly transition.

That transition, of course, began in the middle of last season when Kerr traded the Matrix, Shawn Marion, an open-court machine of a forward, to the Miami Heat for Shaquille O’Neal.

At the time, I equated the move to owning a garage filled with sleek Ferraris and suddenly adding to it a lumbering Mack Diesel belching black smoke.

That’s exactly what the situation has proved to be.

After last season, D’Antoni departed Phoenix for a job with the New York Knicks, where he has resumed his mad, fun experiment. And I must admit that I love watching his Knicks play these days (I always love the rebirth of a dead franchise), just as I loved watching those Suns of the past few seasons running up and down the floor, jacking up shots, sharing the ball, scoring lots of points and even giving an occasional nod to defense.

By the way, I also loved Pete Maravich’s performances with the old Atlanta Hawks. I remember my shock at interviewing Richie Guerin, the tough old pro who coached those Hawks, and hearing him say that he was nauseated by the Pistol’s approach to the game.

So this is hardly a new argument. The concept of basketball as entertainment began to take root back in the 1930s and ’40s with the Harlem Globetrotters and other barnstormers. They started out playing the game straight but soon found they could make much more money and gain much more attention if they focused on entertainment and the gags.

Red Auerbach of the Boston Celtics took an early stand on this issue. Yes, he finally agreed to take the fancy dan passer Bob Cousy as his point guard, but Red didn’t stop till he got the no-nonsense Bill Russell as his post player.

Those old Celtics teams won lots of championships, and even though the game changed, Red didn’t allow dancers or silly marketing games in his Garden.

I love being entertained by the Knicks and those Suns of D’Antoni’s. Do I care if they win championships? Not a lick. I’m not a serious fan of either team.

D’Antoni’s point, of course, is that he can win a championship playing with an up-tempo, quick-shooting style. He’s swimming upstream against years of evidence to the contrary, but I’m entertained at watching him try.

Kerr, on the other hand, has a different experience with the game. He’s played for two great coaches — Phil Jackson and Gregg Popovich— who built multiple championships around great post players. Jordan is the game’s greatest weapon, and Tim Duncan and O’Neal aren’t far behind.

Kerr saw a chance to get O’Neal and figured that with the right approach there was still a championship or two with the Diesel. Last year he struggled, but this year O’Neal is showing signs of rounding into form (at least that’s what longtime Shaq critic Tex Winter thinks. Even so, it’s not so much about building around Shaq per se as it is building an organization that relies on a sound system of basketball).

Kerr, meanwhile, has been busy disassembling the old team and building something that has a chance to win. I know this. I’ve spent some time over the years discussing basketball philosophy with Kerr and he knows what he’s doing.

I also understand that Steve Nash is decidedly unhappy with the circumstances. He’s had a lot of fun and earned a lot of recognition playing a key role in the D’Antoni experiment. But understand this: Until somebody actually wins a championship playing that madcap way, that’s all it is: a fun experiment.

The guy I feel sorry for is new Suns coach Terry Porter. He’s a solid basketball guy who’s stuck in the driver’s seat during a head-spinning transition. And most real transitions are like this. Very, very ugly until all at once they turn pretty. The longer they take, the uglier they are.

With the NBA’s complicated personnel rules and salary-cap system, transitions are oh so slow and tedious, not to mention dangerous. Taking a stand in the NBA can cost you your job in a blink. That’s why most GMs don’t want to take a real big stance. They want to go with the flow and cash those big checks until the vibe runs out.

Kerr’s far from perfect, but he’s got way too much integrity to sell out like that. He’s gonna try to do the right thing, no matter what.

The thing that may seem curious to most fans is that they remember the old Steve Kerr, the son of the career diplomat, the darling of University of Arizona basketball, the fan favorite in both Chicago and San Antonio, the guy who hit that winning shot for Bulls title no. 5, the guy who made those big shots for the Spurs.

What I recall most about Kerr is what a great voice of reason he was for the Bulls back in 1998 when the team was being ripped apart by a battle between Jackson and Jordan on one side and team management on the other. In those days, Kerr was the guy with the thoughtful, clear approach, the smooth communication.

Why doesn’t he play that card more today and talk more to the fans in Phoenix?

The answer there is pretty clear too. Kerr has never been one to engage in shouting matches or heated conflict, although he’s not afraid of taking a stand either (Jordan can attest to that).

No, when it comes to difficult transitions in basketball, it’s most about biting your lip and getting ‘er done. It’s about walking the walk, not talking the talk right now.

I have no doubt that if ownership stays behind him (and of course that depends a sophisticated fan base that loves and cares about winning NBA basketball) then Kerr will see this transition through. And Phoenix will have a shot at winning a title.

Kerr knows that championship moments mean so much more than a little nightly fun. And he’s always been willing to take a punch in the face to prove it.