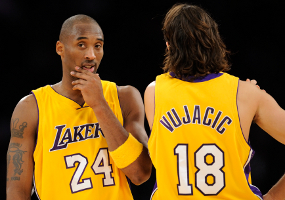 Jerry West has seen it.

So has Tex Winter.

The balance has shifted for the Los Angeles Lakers. In some ways, that shift has been subtle, and in other ways not so subtle.

Everything that seemed to go so well for them at the start of the season has turned brown and dull. Delight has devolved into question marks. Opportunity has become risk. The Lakers’ home game against the Boston Celtics Christmas day could be a measure of just how far that balance has tilted.

Veteran observers, such as West and Winter, are wondering if this shift doesn’t portend the beginning of the downside for Kobe Bryant’s career. If the Lakers aren’t careful with how they use Bryant, the normal aging process of an NBA superstar could be speeded up.

Lakers coach Phil Jackson was oh so aware of this situation as the season began. That’s why he announced that Bryant’s legendary heavy minutes (and thus his scoring burden) would be trimmed back.

It made sense. The process of hauling the Lakers around during their four-year rebuilding process has weighed heavily on the 30-year-old Bryant, who first came into the NBA at 17 fresh out of a Pennsylvania high school.

That rebuilding process culminated in the Lakers advancing to the league championship series last June, where they were first exposed, then smashed by the Celtics. Bryant’s grinding Lakers effort was followed by his prominent and taxing role in the U.S. Olympic victory in China.

As Bryant himself has often said, it’s not the age but the mileage that matters in a playing career. At age 30, his odometer shows a lot of wear and tear. And this season began with questions about Bryant’s legs.

The delight of November was that the Lakers showed a good starting lineup and a deep, energetic bench that allowed Jackson to keep Bryant on the bench for long stretches. He didn’t need to score with the reserves taking apart opponents.

How and why that bench play has declined will be the subject of debate for the rest of the season. This much is clear, however. Bryant’s teammates reached December and found themselves struggling with the mental part of the game.

“They’ve got a pretty good record,” Winter said. “But that could change quickly.”

Now they head into their Christmas day game with Boston, and the Lakers are facing the same ugly issues that stained them after the championship series last June. Are the  supporting players mentally tough enough to compete for a championship?

Of late, those players have been revisited by the ghosts of Christmases past, the inconsistency and indecisive play that have eroded the coaches’ and fans’ – and most importantly Bryant’s – confidence in them.

Now, it seems, the team faces huge issues that could go far in determining how successful Bryant will be in the later stages of his career. Just as important, Bryant’s response to his struggling teammates could well shape his options as he plays into his 30s.

West, in particular, has expressed concern about the wear and tear on Bryant and the need for the team to be vigilant about leaning so heavily on him. West has observed that the time that Bryant gets on the bench each game to rejuvenate is critical at this stage of his career.

Unfortunately, the Lakers’ recent road trip would seem to indicate that issue is growing rather than receding. Bryant’s teammates have not played well of late. And the recent knee injury and impending surgery for backup point guard Jordan Farmar only serve to elevate the concern.

Tex Winter, the Lakers consultant and longtime Jackson aide, says it’s not an issue of effort.

“They are a group of guys who really give it their all,” Winter says of the roster.

However, it is a mental issue with the group, Winter said in an interview Monday.

“I think some of the players’ make-ups is that they’re not real confident in their abilities. And I think it does show through.”

“It gets to the point where Kobe feels like he has to take over. It gets pretty discouraging when your teammates don’t come through like we’d all want them to.”

When his teammates struggle and Bryant moves to shoulder more of the load, that only serves to send the team into its destructive spiral of the past.

“There’s no support then,” Winter says. “The other players just aren’t involved when he does that.”

In the past Jackson has employed psychologists to strengthen the competitive minds of his players. Winter, though, doesn’t see that as the answer this time around.

“They have to work it out on their own,” said the 86-year-old consultant. “As professionals they should have a strong enough competitive nature to do that.”

Forward Lamar Odom remains at the center of this revolving issue for the Lakers.

“He does a lot of things,” Winter said. “He’s a good floor player, but he’s just not very effective scoring the ball. He’s been very up and down and very erratic.”

After starting Odom for three years, the Lakers coaching staff decided to move him to a reserve spot to anchor the second unit this season. Winter said he and Jackson have discussed moving Odom back into the starting lineup.

That could mean using the versatile Odom at small forward, Winter said, noting that “Phil has been searching at that other forward spot.”

It could also mean moving Andrew Bynum to a reserve role.

“Bynum’s not playing nearly as well as he did early last year,” Winter said. “That’s to be expected. When you’ve been out a year with injury, it’s not easy to come back and have the kind of timing it takes to be successful.”

Expectations play a large role in the mentality of the issue. Bynum has signed a large contract extension. Both the young center himself and Lakers fans are eager to see him excel.

Bynum’s got a big future ahead of him, but it’s going to take time and patience, Winter said, adding that despite his struggles regaining his timing Bynum has shown he’s part of the “crux” of the team, with Bryant and Gasol.

The struggles can have a subtle impact on other confident players, such as forward Trevor Ariza.

“When you run into a little difficulty sometimes that confidence disappears,” Winter said.

Not surprisingly, the answer involves a familiar theme.

“A lot depends on Kobe, on whether he can keep the right attitude and play the right way,” Winter said. “If he becomes discouraged with his teammates as he has been at times and starts to take over all by himself, that wouldn’t be good. But that’s always the difficulty with a player of his abilities.”

It is perhaps where Bryant is most similar to Michael Jordan, Winter said, then added that it’s actually where he’s similar to other greats such as West and Oscar Robertson.

“That’s what separates those great players from all the rest,” Winter said. “They’ve got so much confidence, and they want to be the best and are willing to do whatever it takes to be the best. That’s why they are the best.”

Those players often feel that if they back down too much, if they let the dominance of their team slide, then they themselves cease to be great. Great players can lose status quickly if they don’t maintain that greatness edge, Winter said.

That mindset is what drives them to push themselves, and it’s what sets them apart, Winter said.

“One thing about those rare players like Kobe and Michael and West and Oscar,” Winter said, “they want to be the best and they are never satisfied with anything less. That’s what makes them what they are. They’re all very complex.”

The combination of that drive and the circumstances threatens Bryant and the Lakers at this critical moment. Bryant’s competitive nature has always been the motor driving him.

Despite his concerns, Winter holds to optimism, mainly because Jackson remains in charge.

“Phil’s holds up really well,” Winter said. “He’s never too high and never too down. That’s a great characteristic as a coach.”

It’s a characteristic that has allowed Jackson to weather many a storm and find his way to success over the years.

If there’s an answer to be found, Jackson’s usually the one to find it, Winter said.