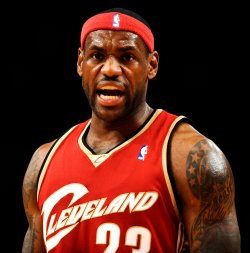 With approximately 30 games played the early frontrunner for the MVP award clearly is Cleveland’s LeBron James. This is no shocking statement.

It doesn’t mean that the award should be suddenly shipped to Cleveland, because there is too much time left, but James has zoomed into the favorite’s role for a number of reasons.

With James, the numbers don’t begin to tell the entire story of his dominance. He has shown the ability to make his teammates better while accumulating those eye-popping statistics.

James of course can’t afford to relax because of the competition he will face in maintaining his frontrunner status.

Oddly, Kobe Bryant isn’t getting anywhere near the mention that he did last season when he won his first-ever MVP award.

James actually may benefit from not having won it in the past. For some reason that seems to be a big deal to voters, but it shouldn’t factor in the equation.

And what might have helped Bryant last year, is possibly hurting him this season. Make no mistake about it, last year wasn’t a lifetime achievement award for Bryant. He clearly deserved the award. This year he should also earn serious consideration.

Bryant was averaging more than 26 points, 5 rebounds and 4 assists for a Lakers team that won 25 of its first 30 games.

The difference this year is that Bryant is playing with a better supporting cast for the entire season. His scoring is down two points a game from his average last year, but Bryant doesn’t need to provide as much offense, especially with Pau Gasol on board the entire season.

Any team that has Lamar Odom coming off the bench, has the type of depth that James certainly doesn’t enjoy in Cleveland.

Usually teams that are battling for the best record in the conference boost most of the major MVP candidates, but how can anybody dismiss Miami’s Dwyane Wade?

After missing 31 games in each of the previous two seasons, Wade showed he was back during an outstanding performance in the Olympics, leading the gold-medal U.S. team in scoring (16 ppg.).

Wade has taken his game to a new level during the NBA season.

And that brings us to some other players who are enjoying truly outstanding seasons, but are overshadowed statistically by the dominance of James and to a lesser extent Bryant and Wade.

Few players have made a greater impact than Denver’s Chauncey Billups since his trade from Detroit.

With Denver, Billups was averaging more than 18 points and nearly seven assists per game. He has brought stability and direction to the Nuggets and has been a major upgrade over Allen Iverson, who was traded for Billups to Detroit.

One player who is receiving almost no mention for the MVP award is Boston’s Kevin Garnett, simply because he doesn’t have glowing statistics, except in one category – wins.

The Celtics won 28 of their first 32 games and what Garnett brings to the defensive end is as important as his offensive contributions.

He is the reigning defensive player of the year and could win the award again this season. Because Garnett isn’t averaging 25 points per game, his contributions tend to be overlooked, except by those who know that he’s the most important player on the defending NBA champions.

Paul was averaging more than 20 points and 11 assists along with three steals per game for a Hornets team that began the week with the second best winning percentage in the Western Conference.

Two other candidates, both from the Eastern Conference are Orlando center Dwight Howard and Atlanta guard Joe Johnson, one of the most underrated great players in the NBA.

Howard is leading the NBA in rebounding and blocked shots and more importantly, the Magic had won 24 of their first 30 games.

Johnson was averaging more than 23 points and five assists for an Atlanta team that was nine games over .500. He is also averaging 40 minutes per game and has yet to show any sign of fatigue.

The competition is so stiff, that we haven’t even mentioned two-time MVPs Tim Duncan of San Antonio and Phoenix’s Steve Nash or 2006-2007 MVP Dirk Nowitzki of Dallas. It also leaves out players such as Houston’s Yao Ming and Toronto’s Chris Bosh, who were both averaging more than 20 points and nearly 10 rebounds per game.

There is no shortage of worthy candidates, but right now, none is more deserving than James.