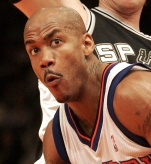 Hoopshype.com readers may recall a recent column I wrote on Stephon Marbury, in which I basically called out the Knicks for the way they’ve handled this rather noxious situation this season. The story also contained the following: “Many teams wouldn’t take on Marbury at any cost, which is probably going to be evident when he does extricate himself from his current situation and becomes a free agent. His track record just isn’t all that overwhelming.”

Well, I still stand by the second sentence.

There apparently may be a soft landing spot for Marbury in Boston once (or should we say ‘if?’) he does work out a buyout with the Knicks. To date, Marbury has shown little to no inclination to accept a buyout. As long as he sticks with that rather Neanderthal strategy, he will (a) remain a Knick in roster-spot only and not play a minute this season and (b) forfeit whatever chance he might have this season of getting on with his basketball life.

And until that happens, there’s no place for Marbury to go. To the vast majority of ordinary and even extraordinary wage earners out there, it has been and remains incomprehensible that Mabury would not agree to give up a portion of his $20.8 million to secure his freedom. He’s made well north of $100 million playing in the NBA. And he’s drawing a line in the sand over $1-2 million, some of which he’d immediately recoup by signing with another team and the rest he could recoup with a new deal?  Unfortunately for Marbury, this position is what’s driving the ‘reputation discussion’ these days. As in, ‘how can he be so stupid? What is he thinking? Is it just about the money?’

While I am not a big Marbury fan – and I believe I am in the majority on this – I have trouble seeing a downside to him coming to the Celtics. You have to think he would be willing to accept a backup role – if he isn’t, it’s ‘end of discussion’ – and would be on his best behavior. If he decides to go into Knucklehead Mode, well, that’s what waivers are for. The Celtics wouldn’t eat more than a veteran minimum guarantee, pro-rated.

Ever since James Posey signed with New Orleans last summer and PJ Brown retired, apparently for good this time, the Celtics have known they need to bulk up their bench. While Marbury does not address one need – size – he does address a number of others.

He can handle the ball. That was a concern last year as well, which led to the February signing of Sam Cassell. The Celtics re-signed Cassell, but he still has yet to play this season. The other point guard options – Eddie House, Gabe Pruitt – are either out-of-position players (House) or still raw around the edges for the playoffs (Pruitt.)

Marbury also can, as they say these days, score the ball. Having a reliable scorer in the second unit has been a problem for the Celtics all season. One night Tony Allen looks like he’ll be the guy. The next night he looks the guy who the Celtics refused to extend last summer and whose mere presence on the court last spring inspired dread and fear in Celtics fans.

Marbury also would be insurance if one of the guards got hurt. (The Celtics’ three guard-small forward starters have yet to miss a game this season.) Plus, if he did come in and play well, the Celtics could consider him down the road, as one of the issues on the horizon is that Ray Allen’s deal expires after the 2009-10 season. While Marbury and Allen were taken in the same draft (1996), and, in fact, traded for each other that day, Marbury is two years younger.

The behavior question is really moot. Think Randy Moss and the New England Patriots. The Celtics have a strong locker room and there is no way that Danny Ainge would foist Marbury on his coach or his team without running it by all of them. Ainge likes to think outside the box – remember his pursuit of Reggie Miller in 2007? – and Kevin Garnett, a former Marbury teammate, would have to agree to be in the ‘let bygones be bygones’ mood. I mean, Marbury broke up a promising Timberwolves team by demanding a trade – in March of 1999. Isn’t there a statute of limitations on that?

And while Marbury’s track record is suspect – the teams he leaves tend to get better – this is different. He would not be the focal point, but a role player. He would in all likelihood get his opportunities in the playoffs, as Brown and Cassell did, but he’s still going to be backing up Rajon Rondo. That’s a given. If Marbury wants to start and play big minutes, then Boston isn’t an option.

You have to believe this is going to be resolved. The Celtics and Cassell waited until late February last season, but part of the holdup was the usual oafish brinksmanship from the Clippers. This time, it’s the team (New York) that is initiating the dialogue and desirous of a divorce. But it’s also a team which has shown no inclination to simply waive Marbury. For New York, it would be preferable to let Marbury calcify and then bid adieu at season’s end (assuming, of course, that there is no trade.)

In the end, this one seems to be falling on Marbury. Clearly, he knows his Knicks days are over. He knows there is interest from the defending NBA champions, a team which can use him to try to repeat. What on earth is he waiting for? The Thunder?