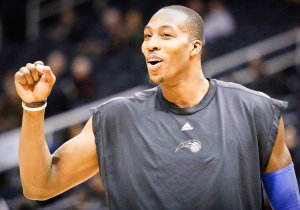 My readers all know that I am a Phoenix Suns fan and I have never wandered from that thought, but there are a few teams that I love to watch when I am not working or watching a Suns game.

The Cleveland Cavaliers and the Atlanta Hawks jump to my mind right away, but the Orlando Magic right now is my team of choice. The Magic are sitting in the best position of any team at the top. Everyone’s attention is centered on the great starts of the Lakers(31-6), Cavaliers(30-6) and Celtics(31-9), but Orlando is sitting at 31-8 and winners of five straight games.

They beat a very good Atlanta team on successive nights and blew them out by 34 in the second game thus getting this comment from head coach Mike Woodson: “At one point during the game I turned to my assistant coaches and asked them how much were we down because the score looked so bad and I needed a calculator to figure it out”.

They followed that victory with a win in San Antonio and blew out a hapless Kings team Tuesday night 139-107 while setting an NBA record with 23 three point field goals.

I like the Magic because they are big and versatile and seem to be gaining confidence with every game they play. That confidence will be tested over the next six games against the Lakers, Nuggets, Celtics, Heat, Pacers and Cavaliers. This stretch could propel them to the front of the pack and position the Magic as the best team record wise in the League, because in their next 14 games after that stretch they will face only six winning teams. They have pummeled sub .500 teams this year with a record of 21-3.

What I love about the Magic is their size on the front line. Dwight Howard (6-10), Rashard Lewis (6-10) and Hedo Turkoglu (6-9) present a matchup nightmare for opposing teams and Howard’s tenacity on the glass guarantees the Magic consistent possessions every night. They lead the NBA in defensive rebounding and they shoot the ball extremely well, especially from three-point territory – making 10 per game. This to go along with improved point guard play from Jameer Nelson -16.6 and 5.0 assists.

The player they are waiting to take off is Mickael Pietrus -11.7 points per game- but he has not shown an ability to stay healthy, which would put more pressure on improving JJ Redick to prove he can bring a skill he is known for and that’s shooting the ball.

Keith Bogans and Courtney Lee have had moments this year as well, but the key player in all of this is Dwight Howard and he has dominated the paint like as Shaquille O’Neal coined him earlier this year – Superman Junior – which based on the way Shaq is playing is by no means disrespectful.

I really have no description for Howard because I have never seen any basketball player with a physique like his. He is the most athletic big man on the planet and with his combination of strength he basically scares the daylights out of opposing players although they might not admit it. Why else does he secure rebounds without a fight? Why else does he seem to move anywhere on the court without much resistance?

He has developed a meanness about him that is hidden with a pleasant smile. I saw him pop rookie Robin Lopez with an elbow and after receiving a technical foul went down the court and patted Lopez on the rear and smiled – thus sending a message that it’s not personal. But don’t confuse the smile for niceness, rookie.

Credit has to also go to that dumpy coach on the sidelines that looks like he should be on Saturday Night Live doing a skit. Stan Van Gundy reminds me a lot of the favorite pro-coach I played for and that’s the late Cotton Fitzsimmons. He is constantly in the game on every play and that has sent a message to the Magic players that he will never let them take a play off regardless of the situation.

Energy is required to have this philosophy of coaching and Van Gundy has proven he is capable. He also will dress down Howard for mistakes and that sends a powerful message throughout the locker room amongst the players.

There is a risk with this way of coaching and players can start to tune you out so Van Gundy better continue to give positive reinforcement to offset the constant nagging and whining he does on the sidelines.

It is a fact the Magic will eventually be a Top 3 seed in the East, but which number will depend on their head to head match-ups with Cleveland and Boston in which they are 0-1 (Boston) so far this season.

What I can say is that I love watching their energy and versatility. I love their dumpy coach and I have always been a fan of Superman even if the original son of Jor-El (Shaq) is still playing.