Best team no one ever saw?

Best team no one ever saw? 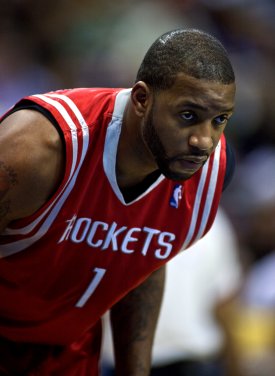 The Lakers, of course, rule the West, and the second-best team is… is…

There is no second-best team.

The aging Spurs aren't what they used to be yet, having gone from Twin Towers to a single tower, with Matt Bonner, a 6-10 small forward, alongside Tim Duncan.

The young Hornets aren't what they were, either. The Jazz need Carlos Boozer back to see if it can be what it was. The Nuggets are twice as good as they were, which leaves them half as good as they need to be. The Suns and Mavericks aren't lost causes but definitely aren't what they were. The Trail Blazers just emailed the doctor who did Greg Oden's microfracture surgery, reserving the right to sue to protect their interests if Greg doesn't pick it up.

The T-Wolves are on an amazing run but I'm not sure they're ready for the Lakes and it's a tad early for the promising (well, one day) Grizzlies and Thunder, too. The Warriors are deciding between competing and imploding as Monta Ellis arrives and Chris Mullin packs. Sacramento is trying to get Rick Adelman back, or at least Reggie Theus. The Clippers just got a notice from Staples Center to win the occasional game or go back to the Sports Arena.

Who does that leave?

Oh yeah, the Rockets, the pre-season favorites to challenge the Lakers. No, really, you could look it up.

After picking up Ron Artest and Brent Barry, they looked formidable, indeed, on paper.

On the floor, however… well, we don't really know what they look like because they've only been on the floor three times.

With injuries to Artest, Barry, Shane Battier and, of course, Tracy McGrady, they never saw their entire rotation until Dec. 22, when they beat the Nets in New Jersey.

Not that cohesion was an issue but the only other two times they were all there, the next night in Cleveland and a week later at home against the Wizards(?!), they lost.

With all the games they've lost (Battier 22, Barry 14, McGrady 12, Artest nine, Rafer Alston six), it's impressive that the Rockets have played as well as they have.

Unfortunately, the problem isn't as simple as getting healthy. The problem is T-Mac. Whatever is going on with him has been going on for years, and it's getting worse.

For sure, his body is breaking down, coming off knee surgery, with chronic problems with his back and shoulder that have caused him to miss 15-4-35-11-16 games in his last five season.

The problem is, no one seems to know how bad any of Tracy's conditions is, including Tracy.

On the floor, he looks like he's hurting, coasting or both. His teammates were sympathetic but their displeasure began to leak out several weeks ago, as when Alston was asked if they were all on the same page, and answered, “Not at all.”

For his part, McGrady, who with his cousin, Vince Carter, might be the NBA's nicest star players, has been a totally stand-up guy and completely out of touch.

Tracy laughed it off as a momentary inconvenience, telling the Houston Chronicle's Jonathan Feigen, “Kick me when I'm down, because I swear to you, I'll be back up.”

Tracy also said his friends were keeping him up on all the criticism and the slurs aimed at him. “They know how I eat that up,” he said. “They know how I take that all in and use it as motivation.” He then played 42 minutes and scored 26 points in their next game, a win at Oklahoma City. Then he shut it down, once more. Finally, after another return and shut-down, they announced he would take two weeks off to work of his conditioning.

Three months into the season, coming off surgery, with all the problems he's had and he's just now going to get in proper condition?

The worst part for the Rockets is that McGrady is still their best offensive player, the only one creative enough to knit everyone together as playmaker and scorer.

Make that the second-to worst part. The worst part has become that the rest of the dressing room is now fuming.

There was even a report that Yao Ming no longer speaks to Tracy and wants him traded, which Houston press people say isn't true. Yao and Tacy still chat amiably as they always have, although that means nothing. The Houston guys say Yao is as upset as everyone else.

Signing Dikembe Mutombo to come in and block shots again at 42 was done in part to bring his sunny elder-statesman's countenance in to help calm everyone.

Of course, with the gregarious Deke's charm, you also get his candor, as when he tacitly acknowledged how bad the situation was in his inimitable style.

This may not have gone over well throughout Houston, corporate headquarters for Cheney's old company, Halliburton, but then, Deke's standing may now be higher now than Cheney's.

In any case, the Rockets have a major issue and it's not togetherness.

It's Tracy and unless they resolve it, by getting him over the hump or figuring out a way to get it done without him, they may go down as the best team no one ever saw.