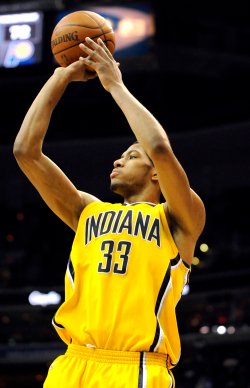 The best players in the league are obvious… LeBron, Kobe, D-Wade, Dwight Howard, etc… But those guys are like a great movie we watch all the time. We know the outcome and we are addicted to seeing it time and time again.

But the feeling we got when they first took off is what gets us hooked. So what we do is crave for the next person to hook us and grab our attention every game they play. We find ourselves flowing right to their name in the boxscore every time they play. We find ourselves rooting for them to continue their great play and we are disappointed when they don’t have a big game. Only in sports is it OK to be unfaithful to your first love and start training your eyes to someone else. I am doing that right now in football with the Arizona Cardinals. I am a die hard Bears fan, but I live in Arizona and the Cardinals are my second love and they have my heart right now.

Coming into this NBA season, I target a number of players I enjoy watching – like James, Wade and Howard – but a few others have taken my attention away with their fine surprising play.

Shaquille O’Neal has been unbelievable not only with his consistent play, but his free-throw shooting has been great compared to past seasons. Shaq has always been one of my favorite players and although the Suns are off to a slow start I look forward to watching him perform.

Mo Williams is another player that has grabbed my attention with his consistent play and big-time shooting playing alongside LeBron, but my favorite player to watch is on a team that is 16-27 but competes every night. He personifiesold-school and has one of the best old-school players watching him every night – Larry Bird.

Danny Granger is the real deal. I remember watching him at the end of the year last season and I came away saying if I had to pick a player in today’s game that played like I did it would be Granger.

Granger is a very good athlete, but someone has gotten in his ear and convinced Granger that playing below the rim will give him a tremendous advantage and save wear and tear on his body while still putting up huge numbers. I watched him a few weeks ago against the Suns and marveled at how he easily scored using a method we called back in the day Old Man Moves.

(Definition: Old Man Moves means a player who is mentally tough and has a smorgasbord of shots that keeps the defense wondering and off balance. He plays below the rim. He takes what the defense gives him. He plays with a level head. He does not waste energy with his dribble. He uses his teammates to get open. He uses a variety of shots to score. He takes big shots and makes them in the fourth quarter. He gets to the free throw line to maintain consistent confidence and he comes to score every night and is relentless).

Granger would drive to the basket and when Shaq and Amare Stoudemire went high in the air to challenge him, he in turn went economical and went low for easy non-spectacular shots. Most players in today’s NBA think poster or mano-a-mano, which is fine if you are LeBron, Kobe, Wade, Amare or Vince Carter. These players can elevate higher than everyone, but Granger somehow realizes his percentage of winning that battle is not in his favor. So he pulls up for the basic 12-foot shot or he shoots a running hook or maybe he uses his off hand. And I have also seen him execute the up and under – very much Old Man Moves.

I had an interesting conversation with Hall of Famer Dominique Wilkins last week about when he felt his game actually took off and he told me when he started using the Old Man Moves to keep his defenders off balance. Most who read this will say, “No way.” But again, I must remind people that the sports programs never showed the basic moves – only spectacular ones – and Wilkins became really unguardable when he slowed down his game and started to play on the floor.

‘Nique really got excited about how Danny Granger was wearing defenders out with basic moves that looked like he was going in slow motion. We started bantering back and forth about how Granger even with these great numbers would have still had a difficult time making an All-Star team back in the day with the plethora of scorers at small forward that competed in the 80s and early 90s.

We started playing the name game and it went like this. I said Bird, he said Alex English. I said Bernard King, he said Adrian Dantley. I said Mark Aguirre (my high school teammate), he said James Worthy. I said Kiki Vandeweghe, he said Purvis Short. I said Jerome Kersey, he said Dale Ellis. I said Orlando Woolridge…

The only reason we stopped is because we both had to get back to our jobs commentating for our respective teams – the Suns and the Hawks. But before we parted, we both said Danny Granger reminded us of the past because of his scoring abilities at small forward.

The challenge for Granger as it is for any player that craves stardom is to lead his team to victories and right now with the Pacers record at 16-27, an All-Star berth could slip through his fingers, but I say it should not. If you look deeper into the Pacer season, I think Granger should get the nod as a forward on this year’s team.

Granger has missed two Pacer victories due to injuries, but he has averaged 27 points per game in the other 14 wins. We also must remember that key injuries to TJ Ford and Mike Dunleavy this season had made consistency more difficult. Also the Pacers are extremely competitive this season with a minus 2 point differential and 7.4 point differential in their 27 losses, which I think shows that they are better than their record indicates. Finally Granger, over 11 of the last 12 games, has averaged 30.1 points per game and the Pacers are a respectable 6 and 6.

So when the reserves are picked for the All-Star team, let’s hope the guy who reminds us of the small forwards of the past will be chosen and he gets a chance to show us those Old Man Moves.