Return of the Scal

Return of the Scal 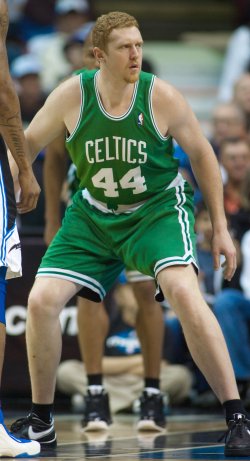 To listen to the wise guys out there, and some of them are actually pretty wise, the Celtics will eventually be undone by their bench. They haven’t found an adequate replacement for James Posey, a playoff assassin and locker room treasure. They haven’t found an adequate replacement for PJ Brown, another locker room guy and clutch playoff contributor. The Lakers and Cavaliers are deeper.

Maybe those assertions will prove to be correct, although Danny Ainge, the team’s basketball operations czar, is mindful of all this and is said to be looking for help (maybe, perhaps, in the form of Stephon Marbury.) Meanwhile, Doc Rivers, the team’s head coach, says if he has to finish the season with what he has now, he is cool with that, in part because he has a new/old guy coming off the bench who is making a solid case for a regular spot in the rotation, at least when he can keep his chin out of the way of Dirk Nowitzki’s elbow.

We speak, of course, of the heretofore forgotten Brian Scalabrine.

Last year, Scalabrine was almost an afterthought for the Celtics’ juggernaut. He played in only 48 games and his minutes haul (512) was the fewest since his rookie year of 2001-02. Already this year, he has logged 444 minutes in 36 games.

“I felt just as important last year as I do this year,’’ Scalabrine said in an interview. “I was ready for the call last year when Kevin (Garnett) got hurt and I started all nine games. We won seven. Sure, on the whole, it feels better to contribute. But as long as we’re winning, that’s what matters the most.”

The highlight of the 2008 playoffs for Scalabrine probably came when he redirected teammate Paul Pierce to the Boston bench after Pierce had approached the Atlanta bench with his “menacing gesture” in their playoff series.

Unless, of course, you want to include his surprise visit to the media room after the Celtics had won the championship by crushing the Lakers, where he chided all the reporters who had picked Los Angeles to prevail.

“How, when you guys consider yourselves NBA experts, can you pick the Lakers to beat us? We’re on TV all the time, so it’s not like you don’t get to watch us play. I just didn’t see it. You guys were so convincing that — you were so convincing that I maybe thought in my heart that, wow, this is going to be a series. How could that be?”

He was right, of course. But Scalabrine wasn’t exactly involved in that or any other series. He didn’t appear in a single game and was inactive for all but three of the team’s 26 playoff games. He simply was not a factor.

“Sure, it was difficult not to play,’’ Scalabrine said as his teammates left for Detroit for a Friday game with the Pistons, leaving him behind while he recovers from a concussion. “But everyone has a role and I just didn’t fit in at that particular time. Very rarely do you get a chance to do something special or be a part of something special and this was it. Accepting your role is very important in all of that. Sometimes, it takes a while for people to recognize that and understand that. To recognize that it’s bigger than you. You need time to grow up.”

This time, it’s different for Scalabrine, but the same for the team, which has the NBA’s best defense and, not coincidentally, the NBA’s best record. Only time will tell if he can give the Celtics anything close to what they got from Posey and Brown when it really, really matters. But in the here and now, Scalabrine has answered the call to replace Garnett in the starting lineup when KG was suspended for one game and then to start five straight games at center (over Leon Powe, who seemingly had taken over the role, but has dropped back, in part because he tries too hard to initiate contact) when Kendrick Perkins was out with a shoulder injury.

The Celtics record in those six games: 6-0. Scalabrine as a starter: 27 minutes, 8.3 points and 3.0 rebounds a game. OK, Dwight Howard isn’t trembling, but considering what the Celtics got from Scalabrine last year, those numbers are almost Chamberlainian by comparison.

“Scal is going to help us this year,’’ Rivers said. “He’s such a versatile player, being able to play (all the frontcourt positions) and being able to guard quicker guys. He hustles. He makes a lot of little plays. What we’re trying to do is to get Scal to just keep the game simple. When you’re open, shoot it. If not, pass it. Don’t try to force it or make things happen. He’s starting to buy into that and I think you can see it in his play.”

Add to Scalabrine’s contributions the explosive, can’t-miss Eddie House, and the Celtics’ bench doesn’t look quite so vulnerable. Or, it shouldn’t. Glen Davis has already had is signature January coming-out (16 points in the big win Jan. 22 over Orlando) and Powe still can be a menacing presence (without the menacing gestures.) Tony Allen has his moments.

House, meanwhile, has already had three games where he has scored more than his season’s best last year (20.) Those games have all come in the last week, where he has connected on 22 of 31 three-pointers. The Celtics are pushing to have House included in the three-point shot contest during All-Star Weekend.

“I look at our bench as a filler bench,’’ Scalabrine said. “Any one of those guys can be put into the starting lineup and not miss a beat. We probably couldn’t sustain what the starters do, but they’re our best players. I feel comfortable with any of the guys starting.”

This is Scalabrine’s fourth season with the Celtics. He, too, is a free agent in the sizzling summer of 2010, although he doesn’t see too many teams using their cap space to bring him aboard.

“It’s not going to be a difficult negotiation,’’ he said. “I’ll just go to Danny and say, ‘I don’t want to go anywhere else. Please re-sign me.’ If he says yes, that’d be great. If he says no, that’s when I’ll probably have to start begging.”