Will Stoudemire have a new home?

Will Stoudemire have a new home? 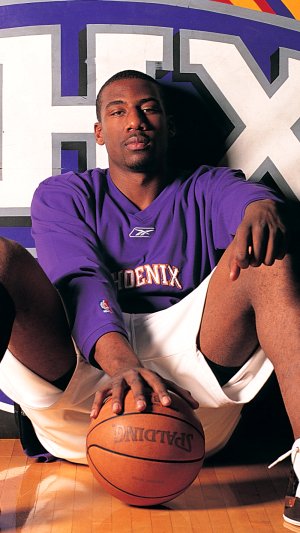 The names have been bandied about for some time and will obviously be until the Feb. 19 NBA trade deadline. Contenders looking to get that extra edge will have a choice at a number of available current stars, once-stars and serviceable players.

You’ve heard all the rumors and here’s a speculative look at some of the possible destinations for those listed prominently in rumorsville.

Amare Stoudemire. The 26-year-old Phoenix power forward appears to be the best player available. He is on the books for more than $15 million this year can opt out of his player contract after the 2009-2010 season.

It’s apparent that Phoenix wouldn’t mind parting with him, but this has to be more than just a salary dump, although receiving an expiring contract won’t hurt. The Suns also need players who can help them immediately.

It has been suggested in various media outlets that the Bulls could offer the expiring $7.1 million contract of Drew Gooden, Joakim Noah, Tyrus Thomas and a possible first round pick for Stoudemire. This would be a dangerous move for Phoenix, because it would be accepting back two players, Noah and Thomas, who are athletic, but have been wildly inconsistent.

CBSSportsline.com has reported among others that Portland has talked to Phoenix, with LaMarcus Aldridge, Jerryd Bayless and the expiring $12.7 million contract of Raef LaFrentz being rumored. (To make this trade work, Phoenix would also have to throw in another players such as Goran Dragic).

Still, one would have to wonder if Phoenix really wants to make a trade with a Western Conference team, although the Suns likely would pull the trigger if it meant they got the best value.

Miami continues to be mentioned as a possible destination but for that to happen, the Suns might have to take back the expiring $17.1 million contract of Shawn Marion and that doesn’t seem likely to happen.

One trade that would work without including Marion is if the Heat sent Michael Beasley, Marcus Banks and Udonis Haslem to Phoenix for Stoudemire. Again, would that be enough?

Toronto has been another rumored destination, but it doesn’t appear as if the Raptors have enough to interest Phoenix.

There will be plenty of other teams that will make pitches to Stoudemire for one simple reason – they know he is available.

Vince Carter. Had the New Jersey Nets been a winning team, Carter may have been an all-star this season. He still has plenty left in his game, but also two more years on his contract after this season, plus a team option.

If the Nets are just looking to dump salary, then Carter to Cleveland for Wally Szczerbiak’s expiring $13 million contract and rookie J.J. Hickson would work. However despite a contract that will have more than $33 million the next two years, the Nets should look for more value for Carter.

Cleveland would be the perfect fit for Carter, who would give the Cavs a great third option along with LeBron James and Mo Williams.

Mike Miller. Last season he was on the trading block at the deadline but stayed with Memphis and didn’t get dealt to Minnesota until draft night. Miller would be a good fit in Cleveland and at $9 million this year and $9.7 million next season, would be a less expensive option than Carter.

Again, this would probably only work if the Wolves are looking to dump salary. The biggest chip the Cavs have is to trade is Szczerbiak’s expiring contract. Cleveland could trade Szczerbiak and Hickson to Minnesota for Miller and Brian Cardinal (owed $6.7 million next year). Both Miller and Cardinal have contracts that expire after next the 2009-2010 season.

San Antonio would also be a good destination for Miller.

Tyson Chandler. The New Orleans center will make nearly $12 million next season and has a player option for 2010-2011. Sports Illustrated had a potential rumor of Chandler going to Detroit for Rasheed Wallace and his expiring contract. That is probably a deal the Pistons would make quicker than the Hornets. New Orleans would receive cap relief but the Hornet would then be looking for a center after this year if they couldn’t re-sign Wallace.

With Andrew Bynum hurt again, the Lakers would be a good place for Chandler, but would New Orleans want to trade him to a Western Conference team? Plus the Lakers don’t have anybody of consequence that they would apparently be willing to trade. Lamar Odom’s name always comes up, but with Bynum hurt again, and the Lakers playing to win it this year, it wouldn’t make sense to trade him.

Miami, with Marion being the best bait, has also been among the teams listed in rumorsville for Chandler.

Two salaries that match up are Chandler and Philadelphia’s Samuel Dalembert. Each have been inconsistent this year and could a change of scenery help both?

Again, this is purely speculation, something that is rampant this time of year.

Shawn Marion. Finding a team that Marion hasn’t been mentioned in a trade rumor is a difficult proposition. With an expiring contract worth more than $17 million, Marion’s name has been linked to many teams, with Cleveland and Toronto heading the list. One thing is for sure – no matter who Marion signs with after this season, it will be difficult to command the salary he is earning now.

Brad Miller and anybody else on the Sacramento Kings. It appears as if any member of the Kings, with the possible exception of Kevin Martin, is available. Miller, whose contract expires next season when he will earn more than $12 million, has been linked with teams such as New York, Chicago and Miami. (Which player on the trading block hasn’t been linked with Miami?). Miller has been out with a left hip flexor strain and one wonders if that would hurt his trade value. John Salmons is a name that has drawn interest and there are some contenders such as San Antonio, where he could be a contributing rotation player.

Jamaal Tinsley. The Pacers have told him to stay home all season so he has been collecting his salary of nearly $7 million, one that has an additional $14 million remaining the next two years.

There was a rumor that Charlotte was considering a multi-player deal that would include Raymond Felton for Tinsley. Charlotte shot that down and rightly so. Felton is emerging as a highly productive point guard.

With Jameer Nelson possibly out for the season, Orlando is in need of a point guard, but the Magic recently acquired veteran Tyronn Lue.

If Indiana is able to unload Tinsley it would be a solid move regardless of what the Pacers got back.

Joe Smith. Not the biggest of name, but he’s a player who many contenders would covet if available. Smith has an expiring $4.7 million contract with Oklahoma City and if he became available in a trade (or if the Thunder bought him out), contenders such as  Boston, San Antonio and his former Cleveland team would surely inquire about his services.

The O’Neals. Phoenix probably wouldn’t mind parting with Shaquille O’Neal and things haven’t worked in Toronto for Jermaine O’Neal. The problem is that both players have seen their better days and each has a huge contract that doesn’t expire until after the 2009-2010 season. Jermaine is owed nearly $23 million next year and Shaq is on the books for $20 million in 2009-2010.

Miami, which traded Shaq, is still mentioned as a potential suitor for Jermaine.