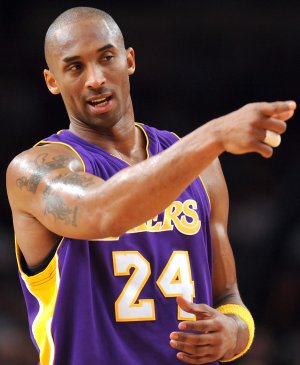 Can anyone keep the Lakers from their seemingly pre-ordained return trip to the NBA Finals?

No one in the Western Conference is making the case in the regular season. The Lakers in the West look like the UConn women – a deadbolt lock. But we all know there is the regular season and there is the other season – no one knows that better than the Lakers, by the way – and a few teams out West are at least showing signs that the Lakers’ inevitable march to the Finals won’t be one in which they’re showered with rose petals along the way.

What makes the West so compelling are spots 2-9 because only eight qualify and some decent team is going to get iced. We’ll can concede No. 1 to Los Angeles’ varsity entry; eight games up in the loss column with 21 games left settles that. And that is a major advantage in the playoffs.

Every series starts on your floor (and Phil Jackson has never lost a playoff series after his team wins Game 1) and every series has Game 7, if need be, on your floor. So any team out West hoping to dethrone the current conference champs has that to deal with out of the chute.

We have no idea who will emerge as the other two division champions. Denver looked to be in control of the Northwest, until Utah caught fire. Portland is still hanging around.

The Spurs, Rockets and Hornets all are in contention for the Southwest crown and the Mavericks may be as well if Mark Cuban can find ways to rip them a couple times a week. (It worked against the Spurs at home; then Dallas fell apart the next night in New Orleans.)

But, realistically, which teams can actually make the Lakers break a sweat? As of now, there are probably three, maybe four. I can’t include Denver; any team with Kenyon Martin, Carmelo Anthony and JR Smith makes me too nervous, Chauncey Billups notwithstanding. I can’t include Portland; too young, but look out next year and beyond. Dallas? Nope. Phoenix? Forget it.

That leaves Utah, San Antonio, Houston and, perhaps, the Hornets. All of these teams could do it, but the likelihood, of course, is that none of them will. (The TV folks sure hope that’s the case, especially with the ‘Pass The Remote’ Spurs.)

No team out West has the cachet of the Spurs and their heart, soul and conscience is still there. And no, we’re not talking about Drew Gooden. The Spurs are muddling along (by their own standards, anyway) and waiting for Manu Ginobili to get healthy. If he does, they can beat anyone.

They are not intimidated by the Lakers or by having to win on the road. They’ve added a couple nice pieces this season (Roger Mason has been a pleasant surprise) and they still have the mental toughness that no one outside of LA possesses. And, don’t forget, this is an odd-numbered year and the only odd-numbered year in the last decade that the Spurs didn’t win was 2001.

San Antonio has been on a roll since New Years (20-9) and has shown some signs of late that its trademark, lockdown defense, is coming back. There’s no one that really figured out how to contain Tony Parker and the Fabulous Frenchman is having a terrific season. The Spurs have realigned a bit; Bruce Bowen now comes off the bench and coach Gregg Popovich finally found a use for long-range gunner Matt Bonner.

Gooden’s arrival had some around the league scratching their heads, for he’s not exactly known for his defense (although he does rebound.) But the Celtics would have taken Gooden in a heartbeat had they not had health concerns (Doc Rivers coached Gooden in Orlando.) These guys came within a horrible call last year of knotting the Western Conference Finals at 2-2. Dismiss them at your own peril.

No team is hotter than the Jazz. And it wasn’t until the team played its 57th game of the season – on Feb. 23 – that coach Jerry Sloan could submit his anticipated starting lineup to the stat crew. When Carlos Boozer played early in the season, either Deron Williams or Mehmet Okur was out. Boozer then went on the shelf for 44 games, but has returned with a vengeance. He had 20 points and 17 rebounds in a recent win over the Rockets.

Sloan has the versatile if occasionally goofy Andrei Kirilenko coming off the bench along with rebounding machine Paul Millsap and sharpshooter Kyle Korver. The Jazz went 20-9 after the All-Star break last season to take the fifth seed in the West. They went into Friday night’s game against Denver – at home – having won nine in a row, eight of them coming after the All-Star break.

They are getting healthy at the right time and if they can stay that way, they have the pieces to not only take the division, but to make things interesting in the playoffs. There’s also the added incentive of winning it for Larry Miller, the longtime Jazz owner who died on Feb. 20. He had his moments, but he had a passion for the Jazz and kept that franchise alive.

The wild card if, for no other reason, the Knucklehead Factor (read: Ron Artest.) The Rockets definitely don’t seem to mind at all that Tracy McGrady has packed it in for the season and they got rid of another potential disruption in trading away Rafer Alston, who can be a royal pain in the you-know-where (don’t take my word for it, just ask Sam Mitchell.) That’s 40 percent of the regular starting lineup gone and, until losing to red-hot Utah last Wednesday, the Rockets had won eight of nine.

One league exec called Houston “the fly in the ointment” for what looms as their untapped (and unknown) potential. They have Yao Ming and no one else does. Artest can defend, but he’s, well, Artest. Coach Rick Adelman has several outside shooters at his disposal, including Aaron Brooks, who has taken over for Alston.

The short-term goal for Houston is simply to get out of the first round. Yao has never done that. But if they do and get some momentum going, they present some headaches for anyone. If only they could play the playoffs in February; Houston has now gone two straight years without losing a home game in the month.

A couple weeks ago, it looked like the bottom might fall out on the Hornets and they’d be the odd team out in the West. But with Tyson Chandler returning (at least for now) and Chris Paul continuing to dazzle (27 points and 15 assists on Thursday night), New Orleans has won six straight and is back in the picture again.

They still need to get Peja Stojakovic rolling so he can be the much-needed third scorer behind Paul and the most unappreciated good player in the league, David West. But even with a full deck, does New Orleans have enough to overtake the Lakers in a seven-game series without the homecourt advantage?

They had LA beat recently in a game at the Staples Center before a dumb play cost them the victory in overtime. The addition of James Posey may not be statistically significant (or quantifiable), but he is a big guy when the money games are on the line. Just ask the good folks in Boston or Miami.

The Lakers still loom large, however, but, as David Stern likes to say, that’s why they play the games. But if Andrew Bynum comes back healthy, you might ask yourself, ‘why bother?’