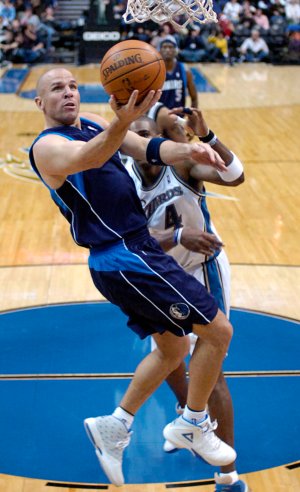 by Bill Ingram of Hoopsworld.com

Most people think of passing when they hear the name Jason Kidd. The Dallas Mavericks acquired him in a trade that sent scoring phenom Devin Harris to the New Jersey Nets because they were looking for a set-up guy.

Kidd, now past the 10,000-assist threshold for his career, fits the bill perfectly. Kidd is a capable scorer, too, but he’s never been the first – or even second – option when it comes to putting the ball in the hole directly. He’s much more likely to be once removed from all baskets scored. This season, however, we’re seeing more and more of Kidd with the ball in his hands when it counts the most – and he’s delivering the big shot himself instead of deferring to others.

Classic case in point, a recent win over the San Antonio Spurs. After leading by ten with a few minutes to go, the Mavericks saw the Spurs cut that lead to two with 30 seconds left in the game. The Spurs played Kidd to pass, as most teams do, and Kidd fooled them. Anticipating their inattention, he set himself up for a corner three. He drilled it, icing a huge win for the Mavs.

The “Other” Jason Kidd

“I had a feeling they were going to double Dirk,” Kidd said of the play. “We put Dirk at the free throw line so he could see the double-team. I chose to go to Terry’s side because I felt that if they doubled off of me then I would have a wide open shot and it was just up to me to make or miss. I felt that I was going to make it, so that’s why I went over there. I wanted the shot and I would go from there.”

“It was huge,” said Mavericks head coach Rick Carlisle. “It was huge. But ever since Jason Terry went out with the hand injury, (Kidd) has stepped it up and he’s looking to score. He’s coming off at mid-range and we’re running stuff with people coming around screens and he’s knocking down shots. He is a great player, and the things that he does for this team from an analytical standpoint have the computers overheating churning out all the (stats). It’s beyond belief how much better he makes guys when he’s on the floor. I’m really happy for him because that was a game that meant a lot to him because it’s a big-time team in our division, the match-up against Tony Parker is one that everybody talks about, and so much of Kidd’s greatness gets overlooked when he doesn’t put up big scoring numbers. That’s a sin. Shame on the media for that.”

OK, Rick, here you go. This season Kidd is scoring a career-low 9.2 points per game, but he also has three top-notch scorers around him in Dirk Nowitzki, Josh Howard, and Jason Terry. In late February and early March, when the Mavs were without Terry for a couple of weeks due to a hard injury, Kidd averaged better than 10 points per game and shot over 50% from the field and over 45% from three.

“He can take and make the big shot,” says Terry. “We’ve seen him do it time and time again. At the end, when it’s on the line, we want the ball in his hands because he is going to make the right decision, whether it’s shooting himself or getting it to the guy that’s open. He’s done it throughout his career and it’s nothing different now.”

Kidd is still somewhat reluctant to look for his own shot most of the time. A familiar sight for Mavs fans is Kidd all alone at the top of the three-point arch with defenders scurrying away to cover passing lanes or position themselves for rebounds. Lately, however, that maneuver is costing opposing teams three points, especially late in games.

“I think at the end of the game, he’s going to be the guy that’s open,” says Dirk Nowitzki. “For some reason, he doesn’t have the reputation of a good shooter, but for us actually, when his feet are set, he’s been a great three-point shooter. When he’s got the time to set his feet, split his legs a little bit, it always seems to look good. When he’s open, I totally trust him, no matter if it’s the first quarter or the fourth quarter.”

That vote of confidence from his franchise player, together with a few more game-winning three-point shots, should do wonders for both Kidd and the Mavs. Though they sit in the Western Conference’s eighth seed today, they’re also just a couple of games removed from home court advantage in the playoffs.

With Kidd gaining confidence and knocking down big shots, the Mavs don’t need much of an opening to move up over the season’s final 20 games.