Brown does it again

Brown does it again 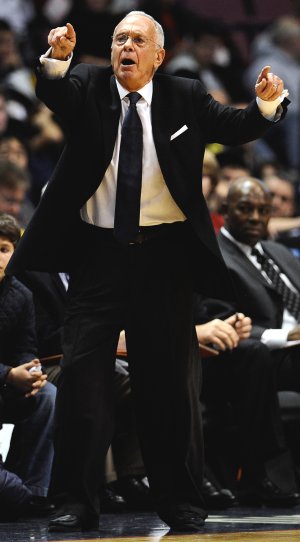 I’ve been writing about Larry Brown as long as I’ve been covering the NBA, which goes back to 1969.

Larry was in the ABA then. One of my good friends, Mike Littwin, then a young writer starting on the Virginia Squires, met him before I did. Mike was doing the rookie thing, walking in the door, seeing the guys, and thinking, “What, now what?”

At that point, Larry, who was a veteran point guard, walked up to him, introduced himself, and said if there was anything he could do to help, just ask him.

No, it’s no coincidence that every writer I know loves Larry. We all know he’s nuts but we love him, to a man.

I’m Jewish, so for me he was like the Sandy Koufax of basketball. I met him in 1977 when the Denver team he was coaching joined the NBA, and got to know him in the ‘80s when he coached the Clippers. After that, I essentially wrote a feature every time he changed teams, or every three years, give or take.

Not that the stories were all the same – I hope – but they were all about Larry, and the pattern never changed.

It didn’t take me long to get it down pat. When he left the Clippers and went to Indiana, I could break any stay with any team down into its constituent parts, which I called the Five Stages of Larry Brown: Arrival, Early Struggle in Which He Tries to Trade Everyone Starting With His Star Player, Triumph, Frustration, and I’m Out of Here.

By Triumph, I mean, Triumph Equal to or Beyond Anything They Could Imagine, like taking a UCLA team with four freshmen in rotation to the NCAA Finals; winning an NCAA title with a Kansas team that was 15-13 at mid-season; taking the 76ers who were 22-60 when he got there, to the NBA Finals; stunning the Shaq–Kobe Lakers to take the Pistons to an NBA title.

Conrad Brunner, who was covering the Pacers when Larry got there and later went to work for the team, told me it held true, every step of the way.

By then, I knew most of Larry’s friends, like Donnie Walsh, the Indiana president, who had been on Frank McGuire’s staff when Larry played at North Carolina, who then served on Larry’s staff in Denver, and finally hired him in Indiana.

Donnie told me the story of Larry’s first job, at Davidson, which  doesn’t appear on his resume – because he left before even conducting a practice, upset that they wouldn’t re-carpet his office.

It was Donnie, who summed up Larry’s personnel moves in one sentence: “If you followed the logic of the deals he wants, you would trade all your players, and wind up getting them all back.”

Oh, by the way, all that meshugas – Yiddish for Larry Brown – works.

If you haven’t noticed, the Charlotte Bobcats, whose franchise record is 33 wins, are in a strange new place at this time of the year… a playoff race… it just shows Larry still has it, even at age 68.

This is really important for him because his last stop, and by far his biggest splash, was in New York, where he lasted a year, went 22-60 and was fired by corporate boss James Dolan, who was used to the losing but had never seen anyone who ignored his orders and kept telling the truth about the team, as Larry did.

Larry being Larry, he did it in style, once conducting a roadside press conference with the beat guys, who had been barred from the practice facility by the team.

Showing how crazy that episode was, the Knicks then tried to claim Larry had breached his contract, which said he had to have a team official present when he talked to the press.

Some jobs, you’re better off losing, no matter how spectacularly you go down in flames.

Not that anything else has changed much. This has been your basic Larry Brown season

The pre-season started with a horrific loss in the exhibition opener, after falling behind Orlando, 41-9, in the first quarter, after which Larry said he didn’t think they’d win in the entire pre-season, which turned out to be true.

By that time, he didn’t think they might win any games in the regular season, either.

It wasn’t that bad but it wasn’t that good. They were floundering at 7-16 but then Larry’s teams always fall on their faces out of the gate his first season. As Mike Gminski, who played for Brown in Philadelphia, told the Charlotte Observer’s Rick Bonnell, the first thing Larry does is practice everyone until they drop. They start the season with their legs dead, until they recover, at which time, they’re in better shape than everyone else.

Larry will also want a trade for some guy no one would look at twice, like Eric Snow, who turned out to be the answer to the question: Who can you pair with Allen Iverson?

This time, Larry got the Bobcats to unload their star, Jason Richardson, sending him to Phoenix for the Suns’ Boris Diaw and Raja Bell.

GMs all over the NBA were going, “Why didn’t I call Charlotte first?” when the Bobcats did a 180, almost from the day Diaw arrived.

Using him as a point forward – kind of his own Magic Johnson – Brown turned the Bobcats, with their non-shooting small forward, Gerald Wallace, and their non-playmaking point guard, Raymond Felton, into a coherent unit.

In early March, a six-game winning streak carried them to 28-35, 1½ games behind No. 8 Chicago. Two losses later, they’re still one of six teams within a half-game vying for the last playoff slot, so this race is just starting.

Of course, it could also constitute the Triumph phase of Larry’s stay.

The Bobcat organization, if you want to call it that, is headed by absentee owner Bob Johnson, who may not be as bad as George Shinn, who had a sex scandal, alienated city officials trying to get a new building, and carpet-bagged off to New Orleans, but is no prize, either.

Johnson adopted a sky-high ticket scale to take advantage of their new downtown arena, turning the entire region off.

Charlotte is lot different than when the Hornets became their first major league team. With the NFL Panthers there, and all the bad will after years of setting NBA attendance records with the Hornets, the city is still cool to the Bobcats. Even with this season’s pleasant surprise under a Tar Heel great, they’re No. 26 in attendance.

Taking heavy losses, Johnson puts little back into the team. Brown would have been there last season, except they wanted to go with a cheaper, $1.5 million model, instead, so they hired Sam Vincent, who went 32-50 and lasted the one season.

Felton, who came on big-time this season, may not be back. He’s a free agent and they have young DJ Augustin, even if the one is ready and the other isn’t.

Let’s just say, Larry didn’t last long with a lot more supportive ownership than he has now, Michael Jordan or no Michael Jordan.

And Mike ain’t around much himself. So who knows, this might not be Larry’s last stop?

Earlier this season, after his Boy Scout troop stunned the mighty Lakers in Staples Center, I told Larry, “You can coach for another 68 years.”

It wasn’t literally true. He won’t live that long.

Aside from that, he could, however.