MVP race not a two-man show

MVP race not a two-man show 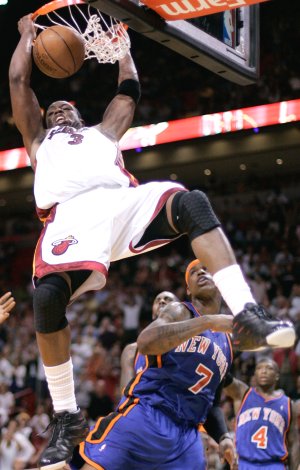 But if you ask me who I think will win the MVP award if voting is in favor of the player that has the weakest supporting cast and yet still has his team in the playoffs and competing at a high level… Then I will tell you it’s Dwyane Wade.

I have been one of Wade’s most vocal critics, but his dedication this year in getting his body in great physical shape to play 82 games has paid dividends that we all knew he had.

Wade listened to someone this past offseason – or maybe he just watched the ultimate workout machine, Kobe Bryant, over the past few summers while playing for the Redeem Team. He reported to the Olympics in great shape and it showed with his ability to play great on both ends of the court and stand out more than anyone else on that gold medal team.

Wade was the best player this past summer and he is trying extremely hard to convince a great number of writers to change their thinking about who should be MVP this season. What he has done this season – 29.9 points a game, and even better after the All-Star break – sends a signal to anyone who thought it’s a two-man show between LeBron and Kobe for the award.

The run Wade has been is Jordan-like for sure. He is not only putting up insane numbers. He is also flirting with triple doubles every night and winning games with Hollywood endings. He has truly become an un stoppable force with his ability to get to the rim at will to set up his improved shooting range out to the three-point line.

Kobe and LeBron have taken notice because their numbers have risen in this stretch as well.

Wade is on such a rapid pace with a mediocre team that I can’t help but say he has become a serious contender to Kobe and LeBron. If voting goes to the standards of how to view a MVP, Wade should walk away with the award beating this year’s most dominant player – LeBron James.

That has happened before. Charles Barkley and Karl Malone won the award during the Michael Jordan era. Allen Iverson, Kevin Garnett, Steve Nash and Dirk Nowitzki have been MVPs this decade – basically dominated by Kobe, Shaquille O’Neal and Tim Duncan.

So we must assume the MVP does not usually go to the best player in the league. The best example would be Steve Nash, who admitted during his back-to-back MVP run that it was absurd to think he was better than Kobe, LeBron, Duncan or Shaq. But he was doing something no one expected and that was taking a 28-win Phoenix Suns team and help turn it into the most exciting team in the league by winning 62 games.

Wade is not doing that. He has the Heat only six games over .500 (36-30) and in fifth place in a weak Eastern Conference, but if you look at the Heat’s roster without him they would be lucky to win 12 games.

That reason alone will increase Wade’s chances of leapfrogging over Kobe and LeBron.

The easiest comparison of the three might lie in if the voters agree with my thought that the Lakers and Cavaliers would still be potentially play-off bound teams minus Kobe and LeBron and where would the Heat be without Wade.

The Lakers have Pau Gasol, Lamar Odom, Andrew Bynum and Derek Fisher, which would be a legit fifth or sixth seed in the Western Conference. The Cavaliers have Mo Williams, Zydrunas Ilgauskas and a trio of solid veterans that could have them competing for a sixth, seventh or eight seed in the East. Miami? It would be lottery-bound squad with an aging Jermaine O’Neal surrounded by a nucleus of young players still trying to figure the league out.

That sceanario should really get Kobe’s and LeBron’s supporters scrambling because if Wade continues with this rapid pace and somehow overtakes Atlanta for the fourth seed, then Wade will have a chance to win his first MVP award and that will be the biggest steal he has had all year long.