The season of the interim coach

The season of the interim coach 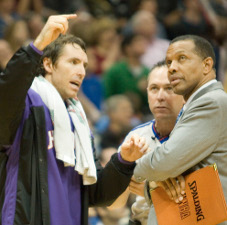 In his book “Falling From Grace,’’ noted basketball writer Terry Pluto had a chapter on interim coaches entitled “The Worst Job in the NBA.’’

Actually, I can think of three jobs that are worse:

1. The guy who had to clean up after Denver’s Rodney White vomited on the court at Madison Square Garden in 2003.

2. The lawyer representing Elgin Baylor who has to convince a court in Baylor’s lawsuit that the Clippers were unfair to the ousted general manager by only giving him 22 years to turn around the team.

3. Anybody who had to draw a charge from Oliver Miller.

“They’ve got to take bullets and the stress of the job knowing, as you’re working your tail off, they’re out there searching for your replacement,’’ Denver coach George Karl said of a typical interim coach. “That doesn’t make anybody feel good.’’

There are several guys on benches now without bullet-proof vests. After all, this could be dubbed the Season of the Interim Coach.

A staggering eight teams have fired coaches since the season started, with six having the interim tag. The only two who don’t have it are Minnesota’s Kevin McHale and Memphis’ Lionel Hollins, perhaps because they’ve worn it before and weren’t about to do so again.

McHale was Minnesota’s interim coach in 2004-05 and Hollins had interim stints with the Grizzlies in 1999-2000 and 2004-05. No doubt he wasn’t about to be an interim man for the third time with the same team, which might have set some kind of record.

Hollins once called the job being “like a substitute teacher.’’ Washington’s Ed Tapscott, who is 15-44 since replacing Eddie Jordan after a 1-10 start, sees where Hollins is coming from, but at least said his Wizards haven’t been throwing spitballs in class.

“I understand the terminology,’’ Tapscott said. “I would say that’s not far from true, but I didn’t have any sense here that guys are saying, ‘He’s not going to be around. I’m not going to listen to him.’’’

Tapscott’s team has been devastated by injuries and long ago made reservations for the lottery in Secaucus, NJ. But at least he’s not having the worst go of these interim guys.

Kenny Natt of Sacramento is 9-36 since replacing 6-18 Reggie Theus. If one were to measure the impact the change has had, perhaps he should be known as Kenny Gnat.

While he might not have the worst record of the interim bosses, it’s hard to find one who has been more ineffective than Jay Triano, 16-36 since replacing Sam Mitchell, who was 8-9 when fired. After making the playoffs for two straight seasons, one in which included Mitchell being named NBA Coach of the Year in 2006-07, the Raptors have become extinct.

If the NBA were hand out a trophy for Interim Coach of the Year, it would go to Tony DiLeo. He’s an impressive 25-19 since taking over for Maurice Cheeks, fired at 9-14. DiLeo earlier this week outcoached the Lakers’ Phil Jackson, having Andre Iguodala shoot a three-pointer for victory at the buzzer while Jackson failed to have his team exercise a foul to give.

If you want to know how surprising DiLeo’s showing has been, consider 76ers guard Andre Miller didn’t even know DiLeo, who had been Philedelphia’s assistant general manager, ever had coached before. Then again, who did know he had, with DiLeo’s previous experience coming in the 1980s when he coached in a country then known as West Germany?

Of the six interim bosses, DiLeo and Oklahoma City’s Scott Brooks have the best chance of being retained full time. Put Tapscott, Triano and Natt as guys who soon might want to head to Kinko’s to choose the font for their resumes.

Place Phoenix’s Alvin Gentry in the maybe column for job retention. He’s 9-8 since taking over Terry Porter, fired at 28-23. But Gentry hasn’t been given a fair chance due to Amare Stoudemire being lost for the season due an eye injury shortly after his arrival.

Oklahoma City’s recent fine play has moved Brooks from being a maybe to looking good. Brooks took over from PJ Carlesimo after he was fired following a 1-12 start, and the Thunder eventually fell to 3-29, putting them in great position to challenge Philadelphia’s 9-73 futility mark of 1972-73.

Yes, some interim coaches have survived to thrive.

The Lakers’ Paul Westhead remains the only one to win a title. Westhead, a Shakespearean scholar who was in his first season as an NBA assistant, took over a month into the 1979-80 season when Jack McKinney suffered a serious head injury in bicycle accident.

But it must be said the Lakers, who were 10-4 at the time and had a rookie named Magic Johnson, hadn’t just fired a coach because the team was underachieving. For that category, we move on to the jobs done by Rudy Tomjanovich, Nate McMillan and Jim O’Brien.

Then, in the Interim Coach Hall of Fame, there’s New Jersey’s Lawrence Frank. He replaced the fired Byron Scott midway through the 2003-04 season and immediately won his first 13 games.

“He ended up doing a real good job and got a contract,’’ said Nets president Rod Thorn. “You don’t see it very often (from an interim coach), but it happens.’’

Thorn knows a bit about life as an interim coach. He went 15-15 finishing out the 1981-82 season for Chicago before he was able to safely return to being solely the Bulls’ general manager.

“I think in most situations it’s a tough job because normally you’re coming in and your chances of becoming (the permanent) head coach probably aren’t real good and the team you’re taking over is probably not that good,’’ Thorn said. “You just got to hope that things go well, and you get the chance to it longer term.’’

After Hollins’ 1999-2000 interim stint with the Grizzlies, he was out of the NBA for two years until being brought back as a Grizzlies assistant in 2002-03. Hollins, saying it was hard to get even an NBA assistant’s job because head men were wary about him wanting to quickly again be a head coach, served during his exile as a minor-league coach and even assisted the Harlem Globetrotters.

But look at the bright side. Hollins lost a lot less games with the Globetrotters than he did as an interim coach.