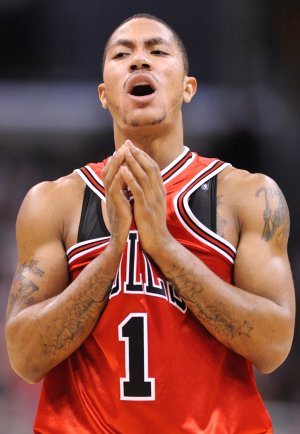 This has been a deep rookie class in the NBA. Whether there are many future all-stars from this group remains to be seen, but there are several players who have made serious contributions, albeit many on teams with losing records.

The rookie of the year debate is often spirited, and this year there are a list of top candidates, but barring a late-season collapse, the first player taken in the draft should emerge with the award.

Derrick Rose has been everything advertised while taking over as the point guard for the Chicago Bulls.

Some critics have suggested that O.J. Mayo and Rose are receiving consideration solely on scoring statistics, since they are the top two rookie scorers.

That obviously plays a part, but Rose especially has done much more than score. In fact in the recent NBA rookie efficiency ratings, Rose is second behind New Jersey center Brook Lopez, with Memphis’ Marc Gasol third.

Rose has carried the biggest burden and has his team still fighting for a playoff spot, even if it is in the watered down Eastern Conference.

Here is one person’s all-rookie team if the season were to end today. This is not projecting who will be the best player in the future, but only on first-year production.

He would be our rookie of the year hands down. Are there parts of his game that need improvement? Of course. Remember, he is less than two years removed from high school. He led Memphis into the NCAA title game last year and with the right parts around him, has the ability to take the Bulls to much greater heights.

Rose’s overall field goal percentage (46.6 percent) is more than acceptable, although he must work on his three-point shooting (23.5). Rose is only attempting three free throws per game, a figure that must increase, especially since he is shooting almost 80 percent from the line.

At 20-years-old, Rose figures to have a bright future. He is one player on this team we can pencil in as a potential future all-star.

Has enjoyed an excellent first season, averaging 12.9 points and second among rookies (to Kevin Love) in rebounds at 7.0. Lopez also leads all rookies in blocked shots (1.84 average) in slightly more than 30 minutes per game. He’s shooting 52.4 percent from the field and 82.6 percent from the foul line. Of all the rookies, he may have exceeded the initial expectations the most.

Detractors say he leads the NBA rookies in scoring (18.4) because he also leads first-year players in minutes played (37.9). Yet Mayo has that same quality that Rose possesses in that he could be projected to one day be a future all-star.

Could he defend better? Sure, but that could be said about any rookie, and many veterans in the league. And Mayo will have to improve his 1.09 assist-to-turnover ratio. Mayo is also shooting 87.7 percent from the foul line, but is attempting 3.5 free throws per game. Again, as he expands his game and takes the ball to the basket, there is no reason why he shouldn’t double that free throw attempt figure, which would make him even more dangerous.

4. Marc Gasol, Memphis.He been a pleasant surprise. A rugged inside player, Gasol is averaging 11.4 points and 7.5 rebounds in slightly more than 30 minutes per game. He is shooting 52.6 percent from the field and 72 percent from the foul line. One thing that can’t be shown on the stat sheet is the toughness he brings to a young team. Whether he develops into a future all-star like his brother Pau remains to be seen, but he is certainly one of the building blocks on a Grizzlies team that can use several more.

While he’s averaging 10.1 points per game, Chalmers has come in to be the point guard of a playoff-bound Miami team that only won 15 games last year. (Of course a healthy Dwyane Wade has had a little to do with Miami’s dramatic improvement). Chalmers’ assist-to-turnover ratio (2.36) is just behind Rose. He’s shooting a respectable 35.9 percent from beyond the arc. Other rookies have had better statistical seasons, but he has filled in admirably in the Heat’s biggest position of need.