The team to beat

The team to beat 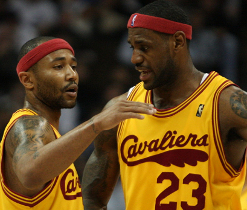 We are winding down the NBA season and one thing seems certain… The Cavaliers, Lakers, Celtics, Magic and Spurs top the charts. There are some wild cards like Houston, Denver, New Orleans, Utah, Portland and Atlanta that might compete and throw a scare during the playoffs at one of the top seeds, but chances are it will not happen because these teams have a combined record of 100-115 on the road and in the playoffs that inability to get a victory will spell doom for them.

The Cavaliers are my team of choice going into the playoffs and it is not all about probable MVP LeBron James. It is about the Cavaliers support group. They have the best support group surrounding a superstar of any team in the league and that is why the Cleveland Cavaliers might indeed win their first NBA championship this season.

Every one of the five top teams has a nucleus of three All-Star caliber players. Cleveland has LeBron, Zydrunas Ilgauskas and Mo Williams. Lakers: Kobe Bryant, Pau Gasol and Lamar Odom. Celtics: Kevin Garnett, Paul Pierce and Ray Allen. Magic: Dwight Howard, Hedo Turkoglu and Rashard Lewis. Spurs: Tim Duncan, Tony Parker and Manu Ginobili –  but that will not be enough to win it all.

The Cavaliers are the better team after we recognize the nucleus of each team. They rise above the other four when it comes to three-point shooting and versatile big men that anchor their stingy defense. Looks like a championship team to me.

Boston won last year with versatility and the Cavaliers have that same blueprint this year. They have been dominant with a 34-1 home record and 59-13 overall.

Cleveland brings a plethora of big defenders plus great three-point shooting to balance the dominance of James. That will allow them to protect him against constant double-teams and also allow them to grab second and third opportunities on the glass. These ingredients combined with their great defense (91.2 ppg allowed) and taking care of the ball (only 13 turnovers a game) are huge if you want to move on to the Finals.

Yes, the Lakers can boast of having some big bodies and a low-post game the Cavaliers lack, but that is only if Andrew Bynum can return from injury, which does not look good at the moment.

The Cavaliers are loaded with Ilgauskas, Ben Wallace, Joe Smith, Anderson Varejao and JJ Hickson and all can cause damage in a variety of ways, which gives head coach Mike Brown many options.

The Celtics can brag about Kevin Garnett, Kendrick Perkins, Leon Powe, Glen Davis and new addition Mikki Moore, but I give the Cavaliers the edge and mainly because of Garnett’s health.

I also believe the Cavaliers have the best collection of three-point shooters. Mo Williams, Delonte West, Sasha Pavlovic, Booby Gibson and Wally Szczerbiak are all money from beyond the arc.

The Lakers can get hot with Fisher, but Sasha Vujacic and the rest of the Laker bench have been inconsistent behind the arc.

The team that should really worry everyone is San Antonio because they will enter the playoffs well rested, but I believe they don’t have enough fire power off the bench to beat the Lakers, Celtics or Cleveland.

The Cavaliers also realize that the Celtics and Magic will face one another before meeting up with them so it would be huge if they could utilize that great home record (34-1) and put away their likely opponents (Chicago or Detroit) in the first round before they deal with probably a tough Atlanta team in the conference semifinals.

The Lakers are privately hoping the Dallas Mavericks garner the 8th spot over the Suns because that will allow them to avoid an emotional and physical confrontation with Shaquille O’Neal and then face Houston or Portland before probably facing San Antonio. Without a healthy Bynum, Pau Gasol will be exhausted having been pounded by Shaq, Yao Ming or Greg Oden before dealing with Tim Duncan.

The road is set and the Cavaliers have put themselves in a great confident position winning 11 in a row and having the best overall record with only one lost at home. That alone should establish them as the favorites.

There is no doubt in my mind who reins as the best team at the moment and now the question will be… Can King James win his first title and start the climb to greatest player ever?