The little man that could

The little man that could 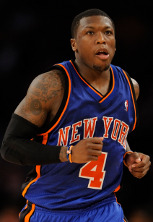 No little man ever had a billboard this big.

In mid-March, a month after he had won his second All-Star slam-dunk contest, New York diminutive guard Nate Robinson was invited to midtown Manhattan by some Nike folks. At one point, the 5-foot-9 Robinson was told to look up at a company creation.

What Robinson saw was a bigger billboard than anybody put up even for very tall legend David Robinson. Looming over 34th Street and 7th Avenue was an 80-foot tribute, showing Robinson posing with the ball in midair above the words, “Leaps Tall Centers.’’

That was a reference to Robinson vaulting over defending champion Dwight Howard to win the slam-dunk competition.

“I wouldn’t have won it if he hadn’t helped me out on my dunk,’’ said Robinson, who also won the dunk crown in 2006 and in February called it “Kryptonate’’ putting an to the reign of Orlando’s “Superman.’’

“It was kind of cool. I said we could split the trophy down the middle or share it or whatever.’’

After the All-Star break, Robinson has continued to jump over foes. And shoot over them.

In 22 games since the break, Robinson has averaged 22.3 points to raise his average to 18.1

“Guys like Calvin Murphy and Earl Boykins, they come to mind, who have tremendous impact, mostly on the offensive end of the court,’’ Denver coach George Karl said of watching Robinson. “His spirit kind of motivates the Knicks every once in a while… with his feistiness, his energy, his spunk.’’

What Robinson also has done lately is really turn some heads for those who vote for the Little Guy Hall of Fame.

OK, so there really isn’t such a Hall of Fame. But if there ever is one honoring players under 5-10 (sorry, but how can another Nate have been called Tiny Archibald when he was 6-1?), the honorees would be pretty apparent.

But, if you want to talk about the history of NBA little men, surprisingly don’t go to Robinson. He doesn’t know anything about Murphy despite the fact he averaged 17.9 points from 1970-83 and paved the way for other little guys.

Robinson has met Webb, the smallest man to have won a slam-dunk title when he did so in 1986. But that’s about it.

Robinson is unlike Boykins, who used to thank the little guys who came before him so much Webb finally told him to stop thanking him.

“I’m not worried about making the (Little Guy) Hall of Fame,’’ Robinson said. “I just want to be known as one of the best players in the NBA.’’

But there is somebody traveling with the Knicks who can speak about Robinson’s place among small men in NBA history. That would be television analyst and Hall of Famer Walt Frazier, who either has played against or broadcast games involving all of the notable little guys named above.

After Murphy, Frazier names Robinson as the second-best player under 5-10 in NBA history. And the four-year veteran’s 12.5 career scoring average is the second-highest among such players, trailing only Murphy.

“He’s 5-9, but he plays like he’s 6-6 with his leaping ability and his tenacity,’’ Frazier said. “Spud Webb, even though he could jump, he wasn’t the physical specimen that Nate is. With his football background, he’s a unique guy. That’s what separates him.’’

Frazier called it “phenomenal’’ when Robinson had a 13-game stretch from mid-February to mid-March in which he averaged 27.2 points. Still, Frazier calls it 50-50 whether Robinson will return to the Knicks after he becomes a restricted free agent this summer.

“The problem, from what I hear, is they can’t sign both of them,’’ Frazier said. “So one of them will have to go, unfortunately. I don’t know which. It’s a tough decision’’

If Robinson is the one to go, there is one bigger drawback. Somebody would have to take down the 80-foot billboard.