Is Iverson running out of answers?

Is Iverson running out of answers? 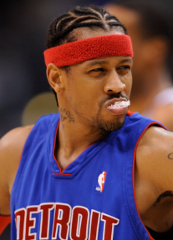 Allen Iverson’s season is over, according to the Detroit Pistons.

What about his career?

Iverson, who will be 34 next season, has an achy back and a psyche that is just as sore, but it would be unwise and premature to label him finished. Still, this season his game declined and that was even before his back began giving out.

Iverson should be in the NBA next season, but he has accumulated plenty of mileage during 13 NBA seasons.

Many felt that with the hell-bent fury that Iverson displayed on the court, that once he began to slow down ever so slightly, it would be the signal of a steep decline.

He can still beat players off the dribble, but not as frequently as earlier in his career. Even at his best he was never a great outside shooter. And his critics have long suggested that he doesn’t make his teammates better.

Iverson’s supporters will point out to his MVP season in 2000-2001 when he was named the league MVP and led the Philadelphia 76ers to the NBA final. That was an overachieving defensive-minded 76ers team that lost to the Los Angeles Lakers in five games. That season Iverson was at his best, but it was also eight years ago. Since then, Iverson has been part of just one winning playoff series, and that came in the first round in the 2002-2003 season.

Pistons president Joe Dumars has long earned the reputation as one of the top executives in the NBA, but brining Iverson on board and unloading Chauncey Billups won’t rank much higher than the decision to select Darko Milicic with the second overall selection in the 2003 NBA draft.

One wonders what shape the Pistons would be in today had they selected one of the three players taken immediately after Milicic – Carmelo Anthony, Chris Bosh and Dwyane Wade. And one can also wonder where Detroit would be had Billups stayed.

Dumars can still make good on the Iverson deal by using the cap room that the Pistons will receive when his salary of nearly $22 million comes off the books after this season.

Yet the trade certainly didn’t work this season and there is no guarantee that the added dollars can once again buy an Eastern Conference contender.

A Pistons team that has been to the Eastern Conference finals six consecutive years is still struggling to be a playoff participant. And while it’s too simplistic to put all the blame on Iverson, he certainly hasn’t done his part to make the Pistons a better team.

Iverson has always been lauded for playing as hard as any player in the league. There is a distinction however between playing hard and playing well. At this point of his career, he is a liability on defense. Iverson continues to need to dominate the ball and thus his teammates, especially in Detroit, were often left standing around. He also didn’t make a favorable impression after complaining about coming off the bench

If Iverson couldn’t fall into line in a team-first unit like the Pistons, could he do it for another NBA team?

He still has enough skill to be able to give a team an offensive lift, but the days of being a 40-minute-a-night player for a serious playoff contender appear to be over. That said, he should still have job options.

First and foremost, Iverson is still a drawing card and one of the NBA’s true fan favorites. His popularity was demonstrated when the fans voted him to the NBA All-Star team against this season.

So a team looking for a gate attraction, especially next season when the NBA is expected to be hurting for ticket sales due to the sagging economy, could take a flyer on Iverson.

Iverson likely has to accept a lot less money and a lesser role with any team he joins, unless he wants to go to a truly awful franchise and then he will be able to score at will.

It doesn’t seem conceivable that he will return to Detroit and it’s hard at this point to come up with any major contender reaching out to Iverson.

His back will eventually heal, but he has some work to do in convincing others that his game remains healthy. Iverson will have to prove that he is a team-first player who can make any franchise appreciably better.

At this point that looks like a difficult sell.