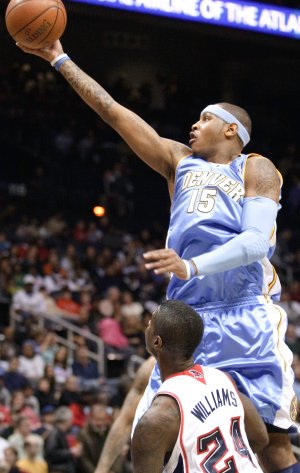 Wherever the Nuggets play on the road in the postseason, Carmelo Anthony can count on not hearing one thing.

That was the chant at the Staples Center during a first-round playoff series last spring. The Nuggets star forward had been arrested on suspicion of drunk driving April 14, 2008, and Lakers fans were not kind to him during a four-game sweep that got underway six days later.

But what a difference a year has made for Anthony and his Nuggets. Last year, they entered the playoffs a distracted team, thanks to the Anthony arrest that came shortly before the final regular-season game. Now, though, it’s a carefree bunch of Nuggets that will show up for the postseason.

Denver (54-27) clinched the Northwest Division with a 118-98 win Monday over Sacramento. The win assured that a team that has lost five straight years in the first round of the playoffs will open the postseason at home for the first time since 1988.

Anthony, who has been a part of all those first-round defeats, said he’s “starving’’ to finally break through. He certainly will begin the playoffs in a much better frame of mind than last year, when he was involved in an incident that led him to be suspended for the first two games of this season.

“I look back on it now, I don’t want to say it’s funny, but it’s behind me now,’’ said Anthony, who eventually plea-bargained to a lesser charge of driving while ability impaired. “It’s old and it seems so long ago that I happened, although it was a year. And so it goes to show how much I came around from that.’’

It’s true his career has been marred by a lot of other negative headlines (a 2004 New York nightclub altercation, a 2004 cameo in the controversial Stop Snitchin’ DVD, a 2004 charge for having marijuana in a backpack that was dropped when the marijuana was determined to have belonged to a friend and a 2006 15-game suspension for throwing a punch in a brawl at New York). But many believe that, in is sixth season, Anthony is finally starting to get it.

Yes, this season featured a March 2 one-game team suspension for Anthony failing to come of a game when Nuggets coach George Karl sought a substitute. But both agree that wasn’t a major issue, and it was nothing compared to the distraction Anthony caused his team on the eve of last season’s playoffs.

“That probably falls into a big mistake,’’ Karl said. “It could have been worse. Hopefully, now, at a very young age, he understands you should never do that.’’

But Karl has seen Anthony continue to mature since then, both on and off the court. He’s talked about Anthony, 24, having grown into a leader after before being just a talented player.

“He’s had a consistent growth spurt,’’ said Karl, “I think every month it’s kind of like, his eyes are open, his mind is open.’’

Over the past year, Anthony has learned even more about the responsibility of being a public figure. He’s been lauded for the dignity he displayed in representing Team USA during last summer’s Olympics, when the “Redeem Team’’ mined gold in Beijing.

It was far different than what had transpired four years earlier in Athens, when the “Green Team,’’ a collection of players too young for the international stage, settled for bronze. Anthony squabbled with coach Larry Brown and barely played.

While in China, Anthony was an ambassador, engaging the Chinese with his personality and showing up at a variety of events. He spent some time with swimming stud Michael Phelps, who also is from Baltimore.

Six months after the Olympics, Phelps got to stand in Anthony’s shoes when it came to a superstar athlete having a negative brush with the law. Then again, after a photo surfaced of Phelps taking a marijuana hit from a bong, maybe it wasn’t that similar.

“In his situation, it’s kind of different than mine,’’ Anthony said. “We grew up (in Baltimore) in two different walks of life. He was the guy who was clean cut. Nobody ever expected anything from him. And finally then, when it hit, that’s why everybody has come down so hard on him. Like what did Michael Phelps do? I can’t believe he did this. I felt bad for him. But he owned up to his mistake.’’

It must be said Phelps also was arrested on a DUI charge in 2004, shortly after the Athens Olympics. He eventually got 18 months probation for pleading guilty.

Phelps’ sentence required him to give speeches to schools. That’s what Anthony soon must do as part of his penalty.

“I’m going to speak at a couple of assemblies,’’ Anthony said of telling students about the perils of drinking and driving. “Whatever I can do to help them out.’’

The way the Nuggets are playing lately, though, chances are Anthony might end up fielding a lot more questions about that.