Does it really have to end?

Does it really have to end? 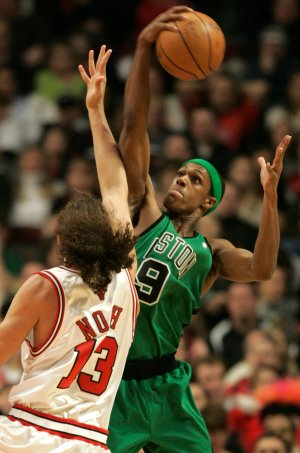 Can we make this one a best-of-nine? Can the Celtics and Bulls keep playing until Kevin Garnett and Luol Deng are healthy again, then do a best-of-seven?

“We want to end this series. We want to be done with this series,’’ Boston’s self-proclaimed Ticket Stub said after the Celtics exhausting Game 5 victory on Tuesday night.

Entertaining doesn’t begin to describe what’s going on between Boston and Chicago in their first-round playoff series. A seemingly mundane matchup between a depleted defending champion and a team going nowhere most of the regular season has turned into a must-see series full of game-winning shots, game-tying shots, physical play, coaching gaffes and everything else you’d want to see in this ‘Where Amazing Happens’ time of year.

Where this one ranks among the all-timers is still anyone’s guess. But we know this much: It’s the greatest Celtics-Bulls playoff series ever (OK, given that the three previous ones were 4-0 Boston, 3-0 Boston and 3-0 Boston, that isn’t saying much) and it already has done what no playoff series in 63 years has ever produced – three overtime games. And there still could be two more to play! (Please, basketball Gods. Two more.)

The Celtics hold the upper hand, 3-2, courtesy of their come-from-behind, 106-104 OT thriller Tuesday night, which could well have gone to a second OT (and who knows what else) had Brad Miller, an 80 percent free-throw shooter, not missed at the line with two ticks left. Or had Miller not missed the rim with his second, an intentional brick, denying the Bulls a chance at a put-back.

The series resumes in Chicago on Thursday night and, well, how about a triple OT game to add spice to the occasion? It’s about the only thing the teams haven’t done in the first five games. You have to think the United Center is going to be at Defcon 5 for this one.

Most NBA observers figured this to be a competitive series, given the Celtics’ absence of the game-changing Garnett and the fact that the Bulls are sort of the anti-Celtics: young, frisky, free-wheeling and callow. But what we’ve witnessed so far has been extraordinary.

ESPN waited one day to re-air Game 4 as an ‘Instant Classic.’ Four of the five games have been decided by a total of 10 points. There have been more than 80 lead changes and more than 45 ties.

There was the Bulls’ surprising OT victory in Game 1, with Rookie of the Year Derrick Rose scoring 36 points in his playoff debut. Only one other player in NBA history had ever scored that many in a playoff debut: Lew Alcindor, aka Kareem Abdul-Jabbar.

Game 2 brought us the vintage shootout between UConn alums Ray Allen and Ben Gordon, with the Celtics (barely) prevailing.

After a Game 3 stinkbomb by the Bulls, we had a double-OT gem in which both teams seemingly had the game in hand, only to watch as the opponent made big play after big play. Allen hit a big three (when the Bulls should have fouled) sending the game to overtime. Gordon hit a ridiculous three (when the Celtics should have fouled) sending the game to double overtime.

Coming off that one, the bar was pretty high for Game 5. But these teams just keep raising it. Another overtime. A controversial conclusion. And a vow by the loser to return to Boston one more time.

The Bulls have won once in Boston already and they’ve been in position to win all three in Boston. They’re not playing like a group going through their first playoff series under a rookie head coach.

Speaking of the rookie head coach, did Vinny Del Negro once think it might be a good idea to double Paul Pierce in OT in Game 5? Ray Allen had fouled out. KG was wearing suit that cost more than a Camry. Del Negro already has taken heat for his use of timeouts in Games and 1 and 2, but why not run someone at Pierce when it’s clear to everyone in the building he’s going to shoot it? (They did it once in the final minute of regulation and Pierce dished it off to Stephon Marbury, who immediately turned to stone.) The Bulls never did when it mattered, however, and Pierce made them pay.

Pierce put on his 2008 Finals MVP face for the end of Game 5, a face we haven’t seen much in the series. The Celtics have gotten sensational play from Rajon Rondo, who is leading them in scoring, assists and steals in the party of all Coming Out Parties. (Until Kendrick Perkins inhaled 19 rebounds on Tuesday, the 6-foot Rondo, who had 8 in the game, also was leading the team in rebounds.)

He also was the one who clocked Miller at the end of the game, preventing a layup, while the Bulls cried for a flagrant foul call. He played 55 minutes in the double-overtime game and then came back and played 49 more in Game 5, though it seems he’s never not on the floor.

Allen has hit big shots throughout after stumbling through the first six quarters of the series. Pierce has been hesitant, tentative and, it seems at time, maybe a little cooked or even hurt, even as he has been putting up decent numbers. But the Take Charge Pierce had been missing. But there he was at the end in Game 5, hitting the last two Boston hoops in regulation and the last three in OT. As Davis put it, “I think since I’ve been here I’ve seen him do it a million times, so nothing surprises me.”

But surely more surprises await for Game 6. For instance, after moaning about the officiating, Perkins, a human wrecking ball if there ever was one, managed to play 48-plus minutes and never got called for a foul. That’s like watching Hubie Brown on TV and never hearing the phase “off the dribble.” Doc Rivers already has been fined $25,000 for commenting on the officiating.

Both coaches have shrunk their rotations. Mikki Moore never got off the Boston bench in Game 5 and played sparingly in Game 4. And this is one a team desperately in need of big men. Perkins and Davis are going to play till they drop. Ditto for Rondo. Marbury might as well start researching jobs overseas they way he has played so far. For Chicago, Gordon has to stay on the floor, lest his sore hamstring tighten up. Rose and Noah are logging long minutes as well, but they’re young.

The Bulls want to bring this one back to Boston for one final shootout. The Celtics want to end it and go on. But if these teams keep playing the way they’ve been playing, two more games won’t be enough. We know it has to end. We just don’t want it to.