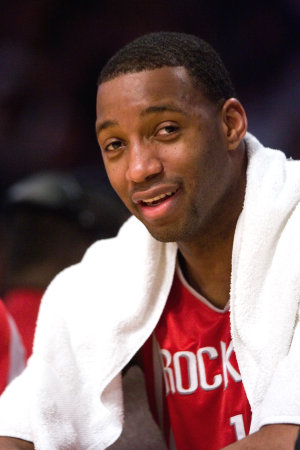 The Rockets entrance into the second round of the playoffs will probably end the Tracy McGrady era in Houston. The Rockets could never get out of the first round with McGrady and now with him sidelined for the season, they are headed to Los Angeles to face the Lakers. I am a huge McGrady fan and personally feel he is one of the top 20 players in the NBA when healthy, but the problem for the Rockets is that he has not accomplished what they just achieved against a very good Portland team.

McGrady put up great numbers in last year’s playoff series against Utah (27ppg, 8.2 rpg and almost 7 apg), but they still lost and in Houston they want wins. This year’s version without McGrady produced all-around contributions and created more weapons to solidify a first-round win. It probably will force the Rockets to shop their star next year.

There are four areas the Rockets improved in without McGrady.

McGrady dominated  on the court, but off the court as well. Although the Rockets have Yao Ming, McGrady still had the spotlight on him 24/7 and I felt because of it, he tried to do too much – thus diminishing the skills of his teammates and especially Yao Ming. The Rockets now seem to co-exist with one another. They seem to relish in the sight of not having to expect one player to produce huge numbers for them to win big games, which becomes a devastating weapon to have moving into the second round against the mighty Lakers.

Ron Artest has been one of the best defenders in the league for a reason. He does not need help to guard his man. This alone takes a lot of pressure off the rest of the team, knowing that Artest is self sufficient. This allows Rick Adelman to gamble and double other players like Pau Gasol and Andrew Bynum and he will be doing it with more aggressive/physical players like Shane Battier and Luis Scola.  What does this have to do with McGrady?  Well, because of Artest’s ability to defend and score, Adelman can keep the diminutive Aaron Brooks on the floor and surround him with players that are very good defenders and can score in double figures as well.

This might be the most important reason why McGrady might not return. The Rockets seem more fluid on offense now that McGrady is on the sidelines. The ball moves and does not stick, which used to force teammates to stop and stare instead of moving. Adelman would rather have the ball stick in Yao Ming’s hands on the post than McGrady’s on the perimeter. He would rather have a high-percentage missed field goal in the post with Ming (54 percent shooting)  than a well-guarded perimeter shot by McGrady (41 percent last year and 38 percent this season).

Balanced scoring has allowed the Rockets to concentrate more on defense and not depend on one player to score in order to win. This in itself will cause the Lakers problems in the second round. Who would have thought Scola would be the Rockets’ top scorer in the first round at 17 ppg.  The best part is the Rockets had six players scoring in double figures against Portland and Ron Artest was taking only 15 shots per game compared with the 24 shots per game McGrady took last year in the first-round loss to Utah. The beauty of this is that there are three players taking more shots than Yao Ming. But it’s all based on the fact that Yao Ming was the big worry defensively for Portland… And will be also for the Lakers, which will allow Scola, Brooks, Von Wafer and Shane Battier to become threats.

This article was not written to diminish the McGrady era in Houston or blaming him for the Rockets’ faults in past years. He was giving them what they expected and it did not work in Houston like it is in Cleveland with LeBron James.  The greatest players in history have been humbled for dominating the ball and critics have pointed the finger at them. Michael Jordan was called selfish and a ballhog until Phil Jackson convinced him the triangle offense was better suited to win a championship.

Rudy Tomjanovich convinced Hakeem Olajuwon to trust his teammates and pass it out of double teams instead of turning it over trying to beat it. When his teammates started knocking down three-point shots with regularity, it gave him more one-on-one matchups in the post and earned the Rockets back-to-back championships.

The problem for McGrady is that all the good things have happened for the Rockets without him on the floor and he never got the chance to be the one who made the adjustment. Now the question is… Do the Rockets want to see if he understands the adjustment he would have to make next year and do they want to deal with it?