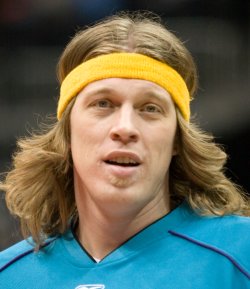 Or, more specifically, a bunch of long-haired guys from Jacksonville, Fla.

It was January 2006, and then Hornets center Chris Andersen had just had been suspended from the NBA for drug use, unable to apply for reinstatement for two years. Two days after the verdict, not much had changed for Andersen.

Andersen was in his living room doing the same stuff he had to warrant his suspension. Then, blaring out of the loudspeakers, came the song “Gimme Back My Bullets,’’ by Lynyrd Skynrd.

That lyric caught Andersen’s attention. Then 28 and having seen voided the five-year, $14 million contract he had signed the previous summer, Andersen’s dream indeed looked gone.

“It hit home,’’ Andersen said. “It was like I was (ticked) off at myself and everything that led up to the suspension. But then I realized I was digging the hole even deeper. Basically, the switch turned on. That was two days after the suspension.’’

It was the day Andersen said he made the decision to get clean and get back to the NBA, which happened when he was reinstated in March 2008.

Nuggets fans are grateful. The “Birdman,’’ whose body is a billboard of tattoos and whose wild hairstyles sometimes look straight out of an exotic bird park, has soared higher this season than anybody could have envisioned.

Signed off the scrap heap by the Nuggets last summer, Andersen during the regular season averaged 6.4 points and 6.2 rebounds and was second in the NBA in blocked shots with a 2.46 average despite logging a modest 20.5 minutes a night. During the first-round of the playoffs, Andersen showed his old teammates what they were missing when he averaged 7.6 points, 5.8 rebounds and 1.80 blocks as the Nuggets walloped New Orleans in five games.

So what are the words that follow the Lynyrd Skynrd verse that caught Andersen’s attention?

“But I got it back. I’m feeling better everyday. Tell all those pencil pushers, better get out of my way.’’

Indeed, the “Birdman’’ is back.

“He’s a basketball gift from the gods,’’ said Nuggets coach George Karl, who seems to only be half joking when he suggests an “offering’’ of thanks to those gods is in order.

Andersen, who after being reinstated last season was confined to a deep-bench role by the Hornets and scored just six points in five games, is being touted by many as the leading candidate for Comeback Player of the Year.

There’s just one problem. The NBA doesn’t have such an award.

It once did. Interestingly, it was done away with before the 1986-87 season and replaced with the Most Improved Player Award because too many players coming back from drug problems were being handed trophies. Of the six who won the award during its 1981-86 run, Bernard King (1981), Micheal Ray Richardson (1985) and Marques Johnson (1986) had battled substance abuse.

However, if a special Comeback Player of the Year were handed out this season, it seems Andersen would do very well in the voting.

“For Birdman to be kicked out of the league for a couple of seasons and get himself back together and get his life back together and be a big-time contributor on a team like (the Nuggets), that says a lot about his character,’’ Hornets coach Byron Scott said after Andersen and mates made the Hornets look as extinct as dodo birds. “I was very proud that he got himself back into the league. He is truly one of my favorite people. He has an infectious personality. I thought he played extremely well in all five games (of the series).’’

Scott had to be wondering if he really was watching the same player who couldn’t get on the court for New Orleans a year earlier. Then again, it’s not as if such an opinion would be in the minority.

The Nuggets worked Andersen out last July while desperately seeking a big man after Marcus Camby had been sent to the Los Angeles Clippers in a salary dump. Karl admits Andersen didn’t initially blow the Nuggets away, but he did enough to get a one-year minimum contract worth $998,398.

“Nobody believed he was going to come back and do what he’s done,’’ said forward Carmelo Anthony, whose Nuggets are coming off their first playoff series win since 1994 and face Dallas in a West semifinal beginning Sunday.

That is, nobody but Andersen.

That’s because Andersen, after having more rust than the Titanic, tirelessly has worked to be even better than the high-flying fan favorite he was during his initial Nuggets stint of 2001-04.

Andersen has had plenty of inspiration. He only needs to look back at that night 3 ½ years ago when Lynyrd Skynrd helped him realize he was throwing it all away.

“I broke the rules,’’ said Andersen, who won’t name the drug he used and spent one month in a California rehabilitation clinic after being suspended. “But I took it like a man. I did was I supposed to do… I showed the NBA (he had changed), and they accepted me back.’’

And the Nuggets, who unexpectedly overcame their frontcourt concerns after the dumping of Camby, are thankful.

Andersen’s statistics aren’t a full gauge of his value. He alters even more shots than he  blocks, and the energy he brings off the bench regularly ignites the team and the fans.

“He’s been so awesome,’’ said Denver guard Chauncey Billups. “I’m so happy for him. He has to be the player in the league that gets the Comeback Player of the Year… He’s been phenomenal all reason is his role.’’

Anthony has joked Andersen might be replacing him as the team’s most popular player. After all, signs and shirts touting the “Birdman’’ are all over the place at Nuggets games.

Andersen’s hair adds to the image. It’s greased up, and protruding out of his headband.

It’s as simple as it sounds. Andersen said he buys a product called Spiker from a Denver beauty supply store, and it takes five minutes to apply before a game.

Make sure of one thing, though. Andersen has matured since he got into a hairy situation with then Nuggets coach Jeff Bzdelik during the 2004 playoffs.

Andersen showed up for a game against Minnesota with his hair formed into giant spikes shooting skyward. Bzdelik immediately sent him back to the locker room.

“He said I wouldn’t play if I wore my hair like that,’’ Andersen said. “He barely played me anyway. I don’t think Karl really cares. But I’m not going to roll out that one (in this postseason).’’

After all, Andersen still might have a wild side. But he’s a lot different than the “Birdman’’ whose NBA career once flew south.

“Ain’t fooling around, cause I done had my fun,’’ goes the Lynyrd Skynrd song as it winds down. “Ain’t gonna see no more damage done. Gimme back, gimme back my bullets.’’

To use another Lynyrd Skynrd song, Andersen has become a “Free Bird.’’