If it works, keep doing it

If it works, keep doing it 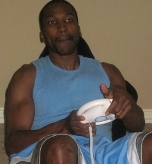 The fun that I’m having playing at this time of year is only trumped by my enjoyment watching the NBA playoffs. My criticism can at times be unfounded but I gotta say, I am a fan of basketball. I think I’m more of a fan than a player. Which means… I’d make a good referee. Ha! That was actually a jab. Players get it.

I’m so engulfed into the playoffs right now, I tend to forget I’m still playing. I’m certain the fact that I’ve been blamed for my team’s struggles has slightly aided in my… um… geez. Lost for words. To put it short and quick (as I rather loathe talking about my personal basketball escapades), we’re not winning, many said I was the reason despite my 21ppg, 7rpb averaged while leading the team in steals, blocks and other things.

I was replaced with Jumaine Jones (who is as similar a player to me as one can get), losing continued without me, I was brought back, hit a game-winning three followed by a 40-point game, now I’m good again but still losing. Sure I left out a gang of details, but who cares? Right? Out of all the things that had my brain running amock, it had nothing to do with basketball or the things happening that would frustrate most others. Big surprise, I’m sure. While playing, the thing that I simply can’t wrap my mental around is the fact that in nine years of playing here, ain’t shit changed. Remember that scene in Fight Club when Brad Pitt asked Ed Norton, “How’s (being an asshole) workin’ for you?” To which Norton’s character retorts, “Great!” Pitt’s character: “Then keep doin’ it.”

That is like my freakin’ modus operendi. If it works, keep doin’ it. However, it seems more common to hear and revel in the aforementioned suggestion and totally ignore its counterpart. If it doesn’t work, change what you’re doing. That being said, it’s my fault I’m still dealing with 30-year-old guys that, just like nine years ago, are still talkin gangsta on a basketball court and always using the island to hide behind. The year I planned was to do the European thing for the rest of my career and keep it simple. But after the France debacle, things didn’t go so well this season. It’s all good, I’m always willing to change if something doesn’t work. And this ain’t what’s poppin’ in the streets.

When I first got married, I had to start being a bit more refined and less rugged. It just so happened I signed with the Rockets and met a vet we’ll call “Buddy Love”. He put me on this peppermint soap. That was when I had a new respect for that man and was cool on the pretty boy thing. After trying that soap, huevos rancheros was no longer a food. Now, I stick with my tree-hugger soaps.

But I suppose that is the trick: Differentiating when and when not to change. My teammate, Hommy De Jesus and I, were having my daily “corrupt Africa” conversation. Hommy asked the question that I hear all the time. Why don’t the elite Africans help quell corruption? That’s easy: there is no desire for self evolution. For the rich there, corruption has worked… So why change? Because it could work better and you could be richer if you helped the infrastructure of people as well as community. Every culture deals with elite greed and selfishness. The difference is in other cultures, they know that sometimes being selfless in certain situations will garner them more than what they already have. Inevitably, even through unfortunate circumstances, this leads to evolution. Even the selfish eventually evolve! Whether desired or not, you must evolve. A trait sometimes lacking among Bantus… everywhere. That’s why I’m goin’ pop a cap in yo ass if you foul me again…

I had this on my mind and like clockwork I saw manifest in what I was seeing. By seeing cases in real life, for me, it just reinforces my present convictions. I don’t believe in coincidence. I believe in intent meeting opportunity. And I respect those with the will to honor the intent on his/her heart. I thought Mickael Pietrus and Trevor Ariza were so lacking when they came into the league. French National Team point guard, Makan Dioumassi and I had many arguments about Pietrus. Well, I texted Makan the other day and said: “Pietrus is more than good. I was way off.” And Ariza, along with Pietrus, might be the X-factor on the Lakers and Magic, respectively.

I mean, do you realize the strength one has to have not only to persist and intend to get better and do it where you have superstars like Dwight Howard and the Monster Kobe to keep happy? It’s much easier to sink in line behind them. Ariza was the only Laker role player willing to shoot with confidence (and a medulla oblongata) and bury the Nuggets. As for Pietrus… Incroyable, mon cher. Pas seulement un match, tous les jeux.

It’s a common theme in the league as well as in life. Evolve or disappear. Just ask the dinosaurs. No, I don’t mean Hey-mon, the other Raptors (what? I can’t make jokes now?). Remember when MJ was slash and smash? He evolved to post and poison. Do I see segway to Kobe? I think I do. Kobe went from attack and and 1 to pick and bop! It never changes the fact that people must change.

I had a college coach that kept telling me that and I never listened. He was like Nostradamus Rick Barnes was. He told me in 1999, “Gabe, you’re gonna make money playing this game, but where do you want to make it?” This came off the heels of me decking Nicky Bradford in the belly and Roy Williams burning a hole through me with his super heat vision. God forgave me, Rick and Roy forgave me, you can too. I’ll tell that story one day. It’s actually more in depth and more entertaining than just a gut punch and the dismissive “thug” claims. If it works, I say keep doing it. Gut punches and China didn’t work for me… So now I just blood choke with a dash of Americana.