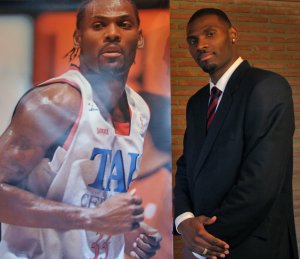 This is Pete Mickeal from Vitoria, Spain.  Little tibdits about myself for those who don’t know me: I play for Tau Ceramica, the current Spanish champion. I was the Finals MVP last year and I’m considered one of the top American players around here. I played with the Knicks and the Rockets back in the day, but the last few years I’ve been doing my thing in Europe. It’s not going bad! From now I will be blogging at HoopsHype.com about my experiences overseas. And hey, I’ll talk NBA stuff too!

The playoffs in the States have been amazing so far, but we’re playing for the title here in Spain too.

Last year was good for us, as we ended up winning the championship, but this time is different. This season we only lost four games (11 last year) and we set an ACB record for fewest losses. Now it’s expected for us to win, so we gotta deliver.

We are now in the semifinals and we’ll play against Real Madrid. We look at Real just like we look at any other team. We worry about ourselves and we need to do to win the game. Of course we respect Real Madrid, the most successful team in European history. They have very good players, including a small guy called Sergi Llull. I like the way he attacks the basket.

Real advanced after beating Joventut, a club led by other small guy. This one you may have heard of: Ricky Rubio. That guy is amazing.

First time I saw him it was like three or four years ago.  I was playing for a team called Breogan in Northern Spain back then, my first year in the ACB. I saw a teenager on the court and I was like, “Who’s that kid?” They told me he was 15 or 16. Never saw something like that in the pros.

I saw his knack for defense, his ability to play the game of basketball at such a young age. That is something rare to see: the knowledge and the awareness of basketball at such young age. And that was when he was 15 years old. Then I’ve seen him turn into a star in the Spanish League, which is no small potatoes. Now everybody in the States knows him. Can’t say I’m surprised.

Last year they won the Spanish Cup in our gym. There were 10,000 at the arena, most of them yelling at him, and he made the last two free throws. He made the first one and I tried to distract him going to the other side of the paint, but it didn’t work. At all. He was very focused and Joventut won, with a 17-year-old kid making the last two free throws. Now that’s eye-opening.

It seems that he would have to pay a lot of money of his own pocket in order to leave Joventut right now. Everyone’s situation is different, but I think any time you get a chance to be one of the top three picks in the Draft, you should go. Just my take.

I was thinking about entering the draft in my junior year. Projections were that I could be a late first-round pick, but I ended being a second-round pick. You can think, “Well, maybe I shouldn’t have gone out early.” But that’s a little bit of Monday morning quarterbacking. When you have that chance, and people are talking about you so well, it’s great to go out because you might not even have that opportunity again. You never know what can happen next year.

I’ve already heard that he may not want to play in certain places. Oklahoma City, Memphis… Teams like that. Having the fifth pick, I think the Wizards should try to do a trade to get him so he can learn from a great point guard like Gilbert Arenas, and play with some other great players. They are starting to have a lot of pressure to perform well and that would be a good fit for him.

It’s my second season here in Vitoria. It’s the first time I have back-to-back seasons with the same team since my college days at Cincinnati, but although I’ve travelled a lot, it hasn’t been so hard because that was my plan from Day 1: improving every year whatever it takes. I’ve lived in Asia for two years, in Greece, now here in Spain… I’ve been through a lot of things, but I wanted everything to go up. I started in small teams and I worked myself up to the top teams. It worked out pretty well for me.

Now you see guys like Brandon Jennings and Josh Childress going to Europe. Now you have more people in the States who’s understanding European basketball. It’s not what it used to be, like, “OK, he’s playing in Europe, he must not be good enough to play in the NBA.” Now you have NBA players in Europe. You consistently have NBA scouts here, and I’m happy because I’m playing in the best league in Europe.

In the last Spanish Cup I hit the winning shot in the Final against Unicaja. That was a turning point in my career. That was one shot I practiced since I was 12 years old. Some things just happen. You saw what LeBron James did the other night? I just have that confidence in myself. The team had faith in me, got me the ball…  So I delivered. (Then I blocked Unicaja’s last shot on the other end. Not bad, huh?)

Going back to the NBA

I live in Miami during the offseason and I get the chance to say hi to a lot of people there – guys like Kenyon Martin, but I have my own group of guys who I’ve been with since I was a kid.

I’d say the Cavs will get it done. I pick the Lakers in the West but I think the Cavs will win in six. LA has a big frontcourt, but the Cavs look so motivated. They have such a great chemistry. They love playing for each other, and actually cheer for each other to do well… That’s really difficult to see that on any team.

Like I said, I’ve played for the Knicks and Rockets, and if I had an offer this summer, money wouldn’t be an issue, because I’ve learned a lot about money since I grew up with nothing. I’ve learned life lessons about money when I was a kid, learning from experience, not having anything. You learn quick that way.

The key for me would be being able to be close to my family. Spending 10 months in Europe every year it’s kind of hard.

I want something great for my life, so I will continue to work for that. And my family understands, so that’s the best part about it. They support me and always keeps me going.

Well, that’s all for now.