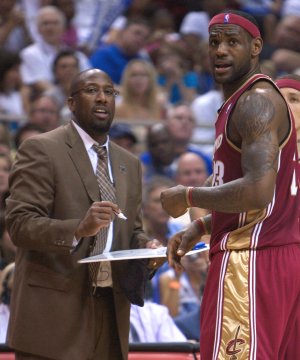 You have to wonder what Cleveland coach Mike Brown is really thinking when he goes over the game films of the Cavaliers series against Orlando. My guess is that the NBA Coach of the Year is uttering something along the lines of: “Where did my team go?” (There might be a few other words sprinkled in as well.)

The Magic have put Cleveland on the brink of an unwanted and certainly unanticipated May vacation, leading their Eastern Conference Final series 3-1. Only five percent of the teams in Cleveland’s predicament have managed to win the series.

The Magic could just as easily be chilling in Hooterville, awaiting the Western Conference champion, had not LeBron James hit his spectacular buzzer-beater at the end of Game 2. But the Cavaliers are going to need more than James’ heroics to pull this one out. If it’s not already too late, they’re going to need to return to the style of play they showed over 82 games in the regular season and the first eight of the post-season.

They’re going to need to defend.

But, as James himself noted after the Game 4 loss to Orlando, “we have broken down in areas that we haven’t broken down in all season.” And, amazingly, “we got to get one stop.”

That wasn’t much of a concern for the Cavs – until they ran into the three-point firing Magic, who are shooting with impunity when not dumping it into Dwight Howard. Orlando thus far has managed to do what no one else has managed to do this season – turn the Cavs into Warriors East on defense.

During the regular season, the Cavs led the NBA in points allowed, surrendering 91.4 a game. That was almost two points ­ahead of No. 2 San Antonio. Cleveland finished second in defensive field goal percenage at 43.06. (The Celtics were at 43.05.) History has shown that these types of teams, as long as they play a little at the other end, tend to do very well in the postseason.

Orlando has treated the Cleveland defense as it was some mere impediment at a county fair booth. The Magic are averaging 104 points a game – or 26 more per game than Detroit and Atlanta. The Magic are shooting 49.3 percent from the field and 43 percent from three-point territory. Those are numbers that, if maintained, will make Orlando a very, very tough out.

Cleveland looks confused on defense, which is surprising given that Orlando’s preferred style of play is not exactly a trade secret. The Magic like to go inside-out with players who can score at every position. Howard is a certifiable beast who the Cavs have not decided needs to be double-teamed or not. You can book him now for a double-double; he’s had 26 in 31 playoff games.

Orlando’s titular power forward (Rashard Lewis) is shooting an astonishing 58 percent from three-point territory, his last being the dagger at the end of Game 4. The Magic’s so-called “small” forward is the 6-10 Hedo Turkoglu, who, when’s he on his game, is the Turkish Larry Bird. Both present major mismatch headaches.

Joined by starters Rafer Alston and Courtney Lee, that gives Orlando four outside shooting threats to go with Howard’s inside presence. Reserves Anthony Johnson and Mickael Pietrus also have three-point range. Heck, Stan Van Gundy hasn’t even bothered to use JJ Redick (10 minutes over four games) and shooting is what Redick does.

What can Cleveland do to counteract this? One possibility is the Cavs elect to fight fire with fire and go to a smaller lineup, with James as the power forward and three shooters to spread to floor. That would mean eliminating offensive anchors like Anderson Varejao and Ben Wallace in favor or more scoring. That would also mean that Cleveland is playing to Orlando’s strength.

And, as Brown noted, the games have been close at the end, despite some wild swings. The first two were decided by one point. Game 4 went into overtime (thanks to a questionable call against Orlando) and was decided by two points. Even Game 3, a 10-point Magic victory, was close.

Something that sometimes gets lost in the discussion is that Orlando plays defense too. Pretty well, in fact. The Magic were among the top five teams in the league in both points allowed and defensive field goal percentage. Howard is the Defensive Player of the Year.

And ever since Orlando was pistol-whipped by the Celtics in Game 2 of their conference semifinal series – the Magic played like total wimps in that game – it has shown a toughness and a resiliency that now has it on the precipice of what would be a surprising, and network-cringing, victory.

Cleveland still has James, the human embodiment of “anything is possible.’’ He’s averaging a stunning 42.3 points a game in this series and his team is still down 3-1.

But, contrary to what you may see, hear or read, this series has not been All About LeBron. It’s been about the Magic’s ability to play at both ends a little bit better and about Cleveland’s inability to be the defensive team it was and has been all season.

Brown better find it – and soon.