The best/worst postseason in NBA history

The best/worst postseason in NBA history 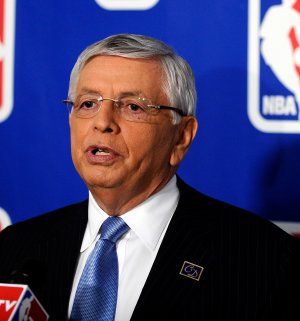 Stop me before I suspend again.

Before I get into NBA commissioner David Stern for the umpteenth time this postseason… which he came perilously close to tainting with his over-the-top legalism… I should note I have always had great respect for the way he has run his league.

He has brought labor peace after the wars of the ‘90s, and actually enhanced the profitablilty of the industry in the post-MJ era, while beset by all manner of calamities.

Although I have to admit I was trying to a few weeks back, when his minions looked this close to suspending Rajon Rondo for Game 7 of the Boston-Chicago classic.

That was the tip of the iceberg, in a crackdown on fighting and flagrant fouls… although there haven’t been any fights or bad flagrant fouls…. so it had become, play the game, await the league review with its upgrades and downgrades, and see who was available for the next game.

The most competitive postseason the NBA had seen in years… or ever… has had to struggle for attention with the perception the league is also in the midst of a crime wave, or merely refereed by boobs.

There were boobs, all right, but they’re the NBA officials, who are now always over the refs’ shoulders, telling them to call all those ticky-tack T’s and flagrants, until the consequences became so alarming, even an NBA lawyer could figure out they had to lighten up.

Midway through the Conference finals, Kobe Bryant and Dwight Howard are both sitting on five T’s, two short of what they need to be suspended.

Howard had six, which given his inclination to celebrate, which is now thought-crime, meant he was a dead man walking, until the league quickly rescinded his last one from Game 4 of the East finals.

How close they came to suspending Rondo in the first round, we’ll never know, but it came down to a league review.

Rondo, en route to averaging 19-12-9 in the series, had gotten tangled with Kirk Hinrich in Game 6, and had slung him by the arm into the press table.

As far as actual violence, it was no biggie, but it was clearly discernible and prompted Hinrich to come back and shove Rondo.

Coming off an incredible 128-127 Bulls win in three overtimes, the run-up to Game 7 was dominated by the review, as the Bulls lobbied behind the scenes for Rondo’s suspension, and Chicago papers took up the cry.

After watching the replay, it seems obvious–this is clearly more of an egregious display of unsportsmanlike conduct than Dwight Howard's errant elbow… Rondo's gotten away with another flagrant foul in this series when he fish-hooked Brad Miller. After reviewing the play, league officials somehow determined that because Rondo didn't wind up, he was going for the ball. Perhaps these same league officials are due for a makeup call?

Actually, it wasn’t close to being as bad as Howard’s elbow to Samuel Dalembert’s head, for which Howard was suspended, even if that would have only been a T or a flagrant in the old days… like five years ago.

Ending the suspense, the league announced it would take no action on Rondo.

Boston won, and everyone moved on to bigger and better things, like the dramatic Houston-Laker series when Derek Fisher was suspended for throwing a body block into Luis Scola, which was definitely intentional but hardly menacing.

There can be no doubt the league is ordering the refs to call this ticky-tack stuff. The Antoine Wright-Carmelo Anthony play in Game 3 of the Denver-Dallas series showed that.

With a foul to give, Wright gave Anthony a little bump, which Mark Wunderlich didn’t call, before Melo’s game-winning three.

I thought it was a no-call. As an intentional foul, it was a disgrace. At the very least, it was arguable.

Nevertheless, within hours NBA counsel Joel Litwin announced it was an error.

Not only did the NBA sell out its own ref, it told everyone on the staff they had better call every touch or twitch, or they could be overruled in public.

Not that this was an unintended consequence. It was the message Stern wanted his refs to get.

Stern is on an ongoing mission to mollify his owners, who constantly complain about the officials, and demonstrate to all the system is on the up-and-up, as opposed to the oft-alleged conspiracy to get the right teams to the Finals.

Unfortunately, the complaining never stops, it just moves around according to which owner is losing.

And the harder Stern tries, the worse things get, as if he’s thrashing around in quicksand.

With TV replays a plus at games — where their use is limited to easy-to-see, objective judgments, like whether a shot was in time, or a toe was on a line — Stern now wants the use of video expanded.

Aside from its use at games, it’s already a disaster.

Every time the league reviews an incident, be it minor or major, it makes it bigger, by a factor of, say, 100.

When it happens several times a week… or a star is suspended for a minor infraction at a climactic moment, like Amare Stoudemire for Game 5 of the 2-2 Suns-Spurs series in 2007… the NBA looks like a league of fools.

Thank heavens for a postseason so goood, it rises above the league holding it.

Let’s just hope we get to see it resolved by the players, not the lawyers.