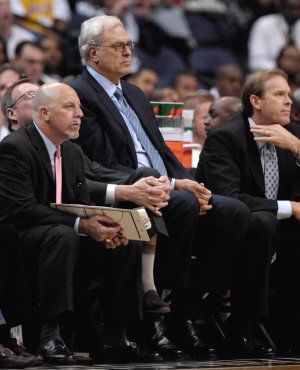 All this talk of Randy Johnson and his quest for 300 wins conjures up thoughts of another tall guy who’s lost a bit over the years on his fastball.

That would be Phil Jackson, the Los Angeles Lakers coach who, unbelievably, hasn’t won a title in seven years.

There was a time when Jackson collected rings more prolifically than a cat burglar. Between 1991 and 2002, he won nine NBA titles, and the only times he didn’t win came when he took a year off from coaching and when Michael Jordan took an entire year and most of another off from playing.

Jackson has had two NBA Finals chances to fix the stuck record, and break the mark he shares with Boston legend Red Auerbach for most championships won by a coach. But his Lakers underachieved in falling to Detroit 4-1 in 2004 and to Boston 4-2 last season.

“Maybe I forgot something, and that’s the reason why we lost the last two,’’ cracked Jackson as he prepares for the third time to try to win ring No. 10, with the Lakers facing Orlando in the Finals starting Thursday.

You won’t find anyone in the NBA questioning Jackson too much. Nine rings are enough to shut up anybody except Bill Russell, who has 11, although he isn’t exactly giving daily interviews on street corners.

But Jackson is 63. He’s had hip replacement surgery, and has a hard time walking. He sits in a high chair during games, and rarely moves. Those things alone would suggest he would have a hard time being as effective as he once was.

“With everything he’s done, I don’t know why he puts himself through it still and doesn’t just walk away and enjoy himself,’’ Hall of Famer Rick Barry said about Jackson’s health problems, although Barry, despite his knack for criticizing even LeBron James, won’t go so far as to suggest Jackson is any less of a coach now.

Still, if one wants to talk about Jackson’s fastball, it’s reasonable to assume he throws just 95 mph now rather than having the 100 mph heat he did while winning six titles with Chicago in the 1990s and the first three of this decade with the Lakers.

The Jackson magic began to slip when his heavily favored Lakers were stunned by the more team-oriented Pistons in the 2004 Finals. And many observers believe Boston’s Doc Rivers outcoached Jackson in the last year’s Finals, when the Lakers were the pick by many to win.

But Jackson is back in the Finals. Although Jackson sometimes has looked half asleep on the bench during an erratic postseason, which saw the Lakers get blown out three times, the sting of losing last June apparently has perked him up.

“We’re just looking at this as something to redeem last year’s loss,’’ said Jackson, who admits his Lakers “weren’t quite prepared for the type of game we had to play against Boston. We know what it feels like to lose. We want to come out and amend that.’’

After all, it could be the last Finals appearance for Jackson. He said in an interview with Magic Johnson on ABC earlier this season he might retire when his contract expires after next season.

Whenever he does step aside for good, Jackson might have run out of names to call it. Winning his final championship with Chicago in 1998 was dubbed the “The Last Dance,’’ and Jackson wrote a book in 2004 before stepping away for one season called “The Last Season.’’

“I don’t think he’s taking the approach, ‘We can do this (another season),’’’ said Lakers guard Derek Fisher, who was on each of Jackson’s three Los Angeles championship teams. “I think he’s going to insure we don’t let this opportunity slip by. How he does it, I don’t know.’’

Maybe Jackson, with his fastball not quite what it once was, will resort to some offspeed trickery. After all, Hall of Fame pitcher Grover Cleveland Alexander didn’t have his best stuff when, in the twilight of his career, he dug down deep with the Cardinals to strike out Yankees slugger Tony Lazzeri with the bases loaded in Game 7 to save the 1926 World Series.