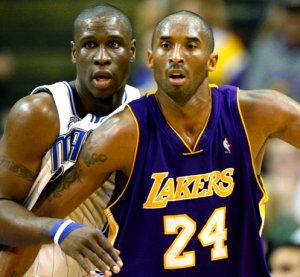 The Orlando Magic finally arrived in Los Angeles Sunday night and although they accounted for themselves much better than in Game 1. They still are headed back to Orlando searching for answers and down 0-2 in the series. They say the playoffs don’t start until someone wins on the others floor. Well, if the Magic do not find a way to recover the shooting magic among their guards, the Lakers will end these Finals rather quickly.

Game 1 was all about defense and Kobe catching fire in the third quarter. The Magic could not stay in the game because they shot a dismal 23 of 77 from the floor. Kobe Bryant had 16 field goals all by himself.

Game 2 was much better, but the Lakers’ ability to close down the stretch with flawless play and active defense is what secured the victory.

The Lakers are one the best teams at rotating out of double-teams and in the first two games they have caused Dwight Howard to turn the ball over nine times. Usually, when the center turns it over it leads to fast-break points and the Lakers have capitalized consistently. Although Andrew Bynum has been a non-factor, their defense inside has been great.

I knew coming into the series that this would happen and it always does. Great teams will roll the dice on a mediocre shooter and take their medicine and double-team a great player like Dwight Howard. That’s what Cleveland did in the Conference finals, but those two burned them all series long and Mike Brown was criticized for doing the obvious. Rafer Alston is a career 39 percent shooter from the field and the Lakers will leave him alone all series even if he hits five in a row. They cannot afford to leave anyone else and after two games Alston and Lee are a combined 7 of 30 from the field and 0 of 9 from behind the arc.

The Lakers just got it done Game 2. They took care of the basketball and made their free throws. That is always a way to find success down the stretch in games. Defensively they forced untimely turnovers when the Magic had the lead and the ball. The experience of losing to Boston last year has the Lakers playing at a frenetic confident pace, which has secured two victories and a controlling lead in the series.

Trevor Ariza did not allow Hedo Turkoglu to walk the ball up the floor when Stan Van Gundy was forced to play him at point guard. He pressured him constantly and wore him down and that’s why we saw Courtney Lee and JJ Redick handling the ball too much late in Game 2. That shot taken by Lee with about 9 seconds to go is normally for Turkoglu, but he was tired and Lee was forced to take a shot.

The plane ride home could not have been pleasant with Orlando knowing they had Game 2 locked up. They missed five straight free throws during a stretch in the third quarter and early fourth that could have had them ahead by six points. They also threw the ball away three times when they had a two-point lead in the middle of the fourth quarter. Lewis and Redick, probably their two best shooters, missed wide open three-point shots when the Magic where already ahead by one point. Finally, Lee missed two layups at the end of regulation that could have given the Magic the lead and won the game.

Although Kobe has been his normal self, Lamar Odom has been the most important player on the floor after two games. He made some huge shots in the fourth quarter of Game 2. His length and smarts have stabilized the Lakers’ bench. He has done what Mickael Pietrus did in the Cleveland series and that is virtually dominating the production from the bench. He has scored 27 of the Lakers’ 43 bench points and has grabbed 22 rebounds.

WHO NEEDS TO STEP UP?

Los Angeles LakersAndrew Bynum has got to give the Lakers something on the road. Kobe, Pau Gasol and Odom have scored 139 of the Lakers’ 202 points. If this trend continues with Bynum, L.A. could find this series tied up after four games. It is one thing to win with virtually only three players at home, but doing it on the road offers a different scenario and I expect the Orlando role players to shoot the ball much better in Game 3.

The Lakers’ bench has not offered much, but until now they have not had to. The test will be in Orlando and Phil Jackson will need some production from someone other than Odom.

The guards have been just plain bad. Where is the swagger that we saw in the Cleveland series?  Alston, Lee, Pietrus, Reddick and Jameer Nelson have all been bad (20-59) and what’s sad is that they will have to continue to shoot the ball. Pietrus is the obvious choice, but history is starting to catch up with him and his shot seems to have taken a nose dive at the sight of Kobe. I am not in the locker room, but I have been in 17 others during my NBA career and I see fear in the eyes of Lee and Pietrus when they face Kobe. They need to call Bruce Bowen and Raja Bell to get advice on how to guard and not back down to the Black Mamba.

Dwight Howard had a great Game 2, but he must do two things for the Magic to have a chance in this series.

1. Stop thinking he can make a two-dribble move in the post against the scrappy Lakers’ help defense.

2. Stop turning the ball over making passes out to the perimeter. Those are precious possessions and because of the double team most of his passes should find a player with an open shot.

The Lakers will continue to double Howard and leave Alston and Lee alone. They lost sight of Rashard Lewis and he almost beat them by himself.

They will also focus extra on getting Bynum involved early offensively, because they need a fourth player to score double-figures against Orlando on their home floor.

I would watch for Kobe to be ultra-aggressive at the slightest thought of his team being satisfied with getting the first two games at home. He knows that the Lakers will need to offset the tremendous emotional frenzy at the beginning of Game 3.

If the guards do not make shots early in Game 3, look for Van Gundy to have a quick trigger finger, put in JJ Redick and move Turkoglu to point guard. This lineup forces the Lakers to rotate off of a shooter, which is not what they want. If Orlando starts draining three-point shots, this will allow Howard to maneuver more inside. That would pay huge dividends for the Magic.

Attack the rim. They had numerous lanes to the basket because of the Lakers being stretched defensively, but they looked to pass instead of shoot. Look for a much more aggressive team in Game 3.

Anthony Johnson might get the call at some point in Game 3 if Nelson does not produce with his backup minutes.

The Lakers will say that they will stay focused, but it does not matter. This is the biggest game of the year for the Magic and I expect them to be energized by their home crowd. Although they lost Game 2, I saw some confidence emerge from their locker room. I expect the role players to step up because, quite frankly, they can’t fall any further than they already have. I also expect Howard to have his best scoring game.

Orlando will win Game 3 and keep the series alive.