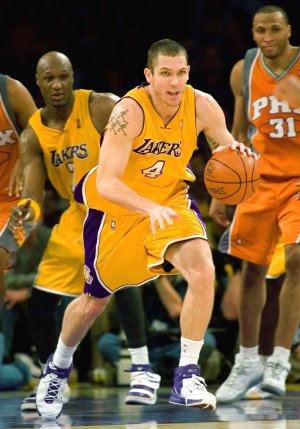 Dusty, yellowed pages need not be turned back. It wasn’t a generation ago when he coached the Albany Patroons of the Continental Basketball Association in a nearly 100-year-old edifice known as the Washington Avenue Armory.

But there was a time when a Phil Jackson-coached team actually choked big time. And it wasn’t that long ago.

Granted, this Jackson Lakers outfit is much better. And the Lakers, who lead Orlando 3-1 in the NBA Finals, potentially have two home games remaining in the series compared to playing just one of the final three at home against the Suns.

Still, the Lakers remember The Choke. Only eight times in NBA history has a team overcome a 3-1 deficit to win a series, and the Lakers’ fiasco against Phoenix was the last occurrence.

Lakers forward Luke Walton said whenever the team has a film session before a closeout game, the collapse against the Suns is featured. He’s counting on the team talking about it plenty heading into Sunday’s Game 5 at Orlando.

“We thought we were going to win it,’’ said Walton, looking back at that Phoenix series. “They had Game 5 at their place and (the Lakers believed) ‘we’ll win this.’ But they took care of business. But then we still had Game 6 at home. But we let that slip away (in overtime), and all of a sudden they had all the momentum in the series. And they blitzed us (121-90 in Game 7)… So anything is possible.’’

The Lakers and the Magic players are actually sounding somewhat similar heading into Game 5. Forget that it’s usually the team in the deep hole that is bringing up instances of outfits having battling back.

But the Lakers are doing it also. Following his team’s dramatic 99-91 win in Thursday’s Game 4, Lakers guard Derek Fisher, who hit pivotal three-pointers in both the waning seconds of regulation and overtime, was looking back at how Indiana handled being down 3-1 to the Lakers in the 2000 Finals.

The Pacers that June also had lost in overtime to fall behind 3-1. But they stormed back to crush the Lakers 120-87 at home in Game 5.

“That’s the attitude that Fish is trying to express, that these guys (the Magic) are going to play their hearts out and they’re going to play really hard, and we have to match that,’’ Jackson said.

The Pacers’ attempt at a dramatic comeback was derailed when they lost Game 6 in Los Angeles, 116-111. But that hasn’t stopped Fisher from using that game to try to stave off the Lakers getting complacent Sunday.

Complacency, after all, has been a Lakers’ specialty at times this postseason. They’ve already been blown out three times, twice at Houston and once at Denver.

“I told them… there’s a chance (Saturday’s) practice may be the last practice of the season,’’ said Jackson, rolling out everything he can to get the Finals over Sunday and not have to play a Game 6 on Tuesday in Los Angeles. “That’s also something that gets them pretty excited because practice for players is something that is, at this level of the game, having gone through hundreds or probably more than a hundred‑some practices, they’re excited about not having to come to practice again.’’

It’s also a motivational play that could work for everybody on the Lakers. After all, Fisher and guard Kobe Bryant are the only players still on the team from the 2000 Finals. And the only holdovers from the 2006 collapse against Phoenix are Walton, Bryant, forward Lamar Odom and center Andrew Bynum, who played exactly one minute in that series.

There are 10 Lakers players remaining from last season’s Finals, when a team also held a 3-1 lead. Never mind that it was the Lakers trailing, that hasn’t stopped their eventual 4-2 loss to Boston from coming up regularly.

“We remember what it felt like last year to lose Game 6 in Boston,’’ said Walton, whose Lakers won 103-98 at home in Game 5 to cut the series deficit to 3-2 before getting blitzed 131-92 in Game 6. “We use those disappointing times and painful times as learning tools to stay focused and stay hungry to finally get ourselves a championship.’’

Well, Walton isn’t speaking for everybody. He might be 0-2 in NBA Finals, but Fisher and Bryant both have three rings and Jackson has nine and soon can break the tie he shares with Boston legend Red Auerbach for most titles won by a coach.

But, as legendary as Jackson’s career has been, he once actually choked when being up 3-1 in a series.

Maybe that’s the one thing that gives Orlando’s players hopes. Still, the odds remain long for the Magic.

No team ever has overcome a 3-1 deficit to win in the Finals. And, of the eight previous teams to come all the way back from such a deficit, just two did it while winning twice on the road.

“We’re down 3-1, but we’re not going to give up and lay down,’’ said Magic forward Rashard Lewis. “If we do that, we might as well forfeit and just give them the rings instead of playing on Sunday. We’re here to win a championship. And we’re going to fight. Who knows what’s going to happen. Anything can happen. Anything is possible.’’

Those were the exact words uttered by Walton. He knows that even Jackson once blew a 3-1 lead.

The eight instances in which a team has come back from a 3-1 deficit to win an NBA playoff series:

2003: In an East first-round series, Detroit comes back on Orlando.

1995: In a West semifinal, Houston comes back against Phoenix, winning two of the three on the road.

1979: In the East final, Washington rallies against San Antonio.

1970: In a West semifinal, the Lakers overcome Phoenix.

1968: In the East Final, Boston comes back against Philadelphia, winning two of the three on the road.