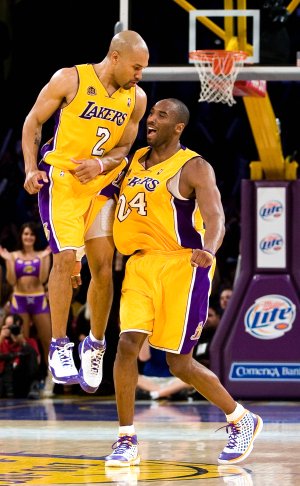 We’ve got Kobe Bryant and you don’t.

It was pretty much that simple as the Los Angeles Lakers won their 15th NBA title Sunday by defeating the Orlando Magic 99-86.

The debate will continue to rage next season as to who the best player is in the NBA, Lakers guard Bryant or Cleveland forward LeBron James. But Bryant just won his fourth ring and James is sulking at home, having not even been invited to the NBA Finals.

For now, the case is closed.

The NBA Finals usually come down to superduperstars. The Lakers have one in Bryant, and Orlando, while center Dwight Howard is on his way, don’t quite yet have one.

Bryant might not have won another Most Valuable Player trophy this season (James did), but he was the difference in the Lakers winning their first title in seven years. But you better believe Bryant, who scored 30 points in Sunday’s clincher and averaged 32.5 points and 7.4 assists during the Finals, is fine settling for winning the Bill Russell NBA Finals Most Valuable Player Award, named for the first time after the Boston legend.

It only was appropriate that Bryant looked like Russell in Sunday’s clincher, blocking four shots.

The Lakers also won the title this year because of the length on their frontline. They start 7-footers Andrew Bynum and Pau Gasol in the post, and can bring Lamar Odom in to play small forward. That takes its toll on any foe in any seven-game series.

Still, the Lakers weren’t always dominant in the Finals. That’s why it will not be a fun offseason for Magic players and coaches as they wonder why they were unable to take advantage of when the Lakers were vulnerable.

There were several near misses in Game 2, which Orlando lost in overtime. And there was the outright choke in Game 4, which the Magic lost in overtime after blowing a five-point lead entering the final minute of regulation.

Unlike in the East final win over Cleveland, the Magic players were unable to hit clutch shots. And their vaunted three-point attack was off, especially Sunday, when Orlando shot just 8-of-27 from beyond the arc.

In the end, the Lakers needed only to play their best at certain times to give coach Phil Jackson his 10th ring. That breaks a tie he held with Boston legend Red Auerbach for most NBA coaching titles.

Obviously, there were a lot of disbelieving Magic fans who parted with their tickets, and they ended up in the hands of fans wearing purple.

It’s a good bet that Lakers fans will again be seen in droves at next June’s final. With Bynum, who never was quite the same in the playoffs after returning from a knee injury, presumably healthy next season, they should be the favorites to win another title.

Of course, some questions will need to be answered. Will Jackson return in an attempt to win an 11th ring? Will the Lakers be able to keep both Odom and Trevor Ariza, forwards who are free agents? And will Bryant opt out of his contract and leave the Lakers?

It’s highly doubtful the third will happen. Bryant had too much fun finally winning a title outside of the giant shadow of former Lakers center Shaquille O’Neal, the Finals MVP in 2000, 2001 and 2002 when Bryant played the role of supporting actor.

Then next June, the Lakers again might be able to say, “We’ve got Kobe Bryant and you don’t.’’