What's the best class ever?

What's the best class ever? 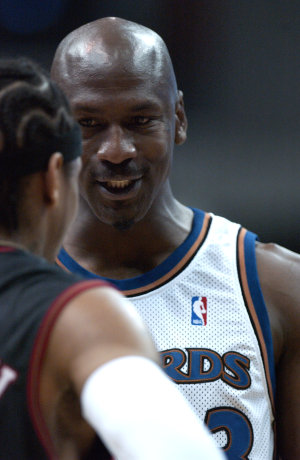 Cue up the grainy highlights. It’s a good time for draft anniversaries.

It must be said that, while any draft with Chamberlain can’t be overlooked, there wasn’t much depth after he was a territorial pick. The only other Hall of Famer to go in 1959 was Bailey Howell, No. 2 in the regular phase.

Abdul-Jabbar’s 1969 draft had even less depth, producing no other Hall of Famers. After the big fellow went No. 1, the next best player taken was seven-time All-Star Jo Jo White.

As for 1984, that’s quite another story. While Jordan was the No. 3 pick, three other Hall of Famers are draft classmates, top pick Hakeem Olajuwon, No. 5 Charles Barkley and No. 16 John Stockton.

“I think our class is pretty impressive,’’ Barkley said. “I think ours would go up against many (classes).’’

The 1984 class no doubt ranks among the greatest in NBA history. But is it the best ever?

Barkley didn’t want to go that far. But Barkley was asked how the class stacks up against the star-studded 1996 group, which is looking even better after Lakers guard Kobe Bryant just was handed the NBA Finals MVP.

Barkley also was asked how the 1984 class fares against the 2003 group, headed by LeBron James and Dwyane Wade.

At least one member of the 2003 class might disagree. That would be Carmelo Anthony, who helped put himself closer to the category of James and Wade by leading Denver to the Western Conference final.

It seems the only solution is an all-time draft playoff. Take the top eight draft classes in NBA history, and match them against each other, with the winner crowned.

One concern, though, is how to best measure a draft class. How should superstar players be weighed alongside overall depth of the draft? And what about players selected in the late 1960s and early 1970s who played initially in the ABA?

Here are some ground rules. There are five players on the court at once, so the top five players from each draft class will provide the primary weight.

As for ABA players, Dan Issel dropped to the eighth round in the 1970 NBA draft because he already had committed to the ABA. Issel counts since he was coming directly from college.

On the other hand, Julius Erving was drafted No. 12 in 1972 after he had played one ABA season (Erving wasn’t eligible in 1971 due to being an underclassman). Sorry, Erving doesn’t count because he already had been an American professional.

One other rule. Players drafted more than once (such as Elgin Baylor in 1956 and 1958 and Sam Jones in 1956 and 1957 only count toward the last draft in which they were selected).

Here are the eight draft classes battling it out, with the top five players listed in the order selected:

The class is headlined by four Hall of Famers and a guy who played in eight All-Star Games that nobody remembers. Only three other draft classes (1965, 1970 and 1984) can claim four or more Hall of Fame players.

The class has three Hall of Famers to its credit. And old-timers are working to get Chet Walker a ticket himself one day to Springfield, Mass.

This class holds the mark for most Hall of Famers with six. The forgotten one is Issel, plucked in the eighth round by Detroit. Other draftees were impressive, including Rudy Tomjanovich, Charlie Scott and Geoff Petrie, co-Rookie of the Year with Dave Cowens. Since we’re not leaving any Hall of Famers on the bench, six are listed here.

This group includes the greatest player ever in Jordan and two of the greatest ever at their positions in center Olajuwon and point guard Stockton. There’s not a clear-cut fifth guy to stand around in awe and watch the others, but Kevin Willis gets the nod over Otis Thorpe on seniority since he played 21 NBA seasons to a mere 17  for Thorpe.

While overshadowed by 1984, this class still produced a pretty nice encore. It includes three Hall of Famers and Chris Mullin, who eventually could be enshrined.

Four from this class are certain to get into the Hall of Fame. For the fifth spot, there was ample competition in this very deep draft, with Jermaine O’Neal getting the nod over five other players to have made All-Star Games (Peja Stojakovic, Stephon Marbury, Shareef Abdur-Rahim, Antoine Walker and Zydrunas Ilgauskas).

This group is just getting started. James has been named MVP and won a scoring title. Wade has a championship and a scoring crown. Anthony and Chris Bosh are full-fledged stars. For the fifth spot, David West nudged out Josh Howard since West pays more attention during the national anthem.

Here’s a look at the all-time draft showdown:

Cousy vs. Nash. Is that not a point-guard matchup for the ages? But even though Yardley was the first NBA player ever to score 2,000 points in a season, the guys from the Studebaker generation don’t have enough offense. Winner: 1996.

There’s great team play from consummate pros DeBusschere, Lucas and Havlicek, players who were on nine of the 12 title teams between 1962 and 1973. But James’ gang has too much talent. Winner: 2003.

Barry and Jordan get into a shootout. But, in the end, the championship experience of Jordan and Olajuwon (eight titles between them) are too much. Winner: 1984.

With the 5-foot-9 Murphy and the 6-1 Archibald, the little guys aren’t to be denied. Malone is tough, but this time the “Mailman” doesn’t deliver. Winner: 1970.

Iverson shows up late. Nevertheless, there’s just too much firepower from Iverson, owner of four scoring titles, and Bryant, who has two. Winner: 1996.

It’s Jordan vs. James. James will want to replay this battle of elite classes in a decade, but, for now, the class of 1984 is as dominant as Big Brother is in George Orwell’s novel. Winner: 1984.

In the end, how can one pick against any team with Jordan on it? Well, any team besides the Washington Wizards of 2001-02 and 2002-03. The 1996 class has more depth, but it’s hard to top the star power of Jordan, Olajuwon, Barkley and Stockton, who combined for seven MVPs, 23 All-NBA first team selections, 45 All-Star Game selections and seven Olympic gold medals.  Winner: 1984.

Speaking of Olympic golds, did we mention 1984 draftees combined to win 14 additional gold medals? That would be one each from Sam Perkins, Alvin Robertson, Vern Fleming, Leon Wood and Jeff Turner from the 1984 basketball games and nine from track legend Carl Lewis.

Yes, Lewis was drafted in the 10th round in 1984. But let’s not go overboard. Bruce Jenner was selected in the seventh round in 1977, but that doesn’t help that draft class.