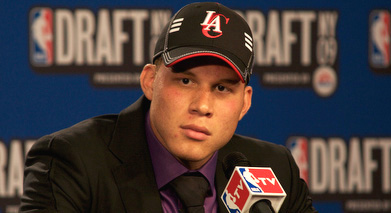 Watching Blake Griffin ascend the stage Thursday night at the NBA Draft, don a Los Angeles Clippers hat, shake David Stern’s hand and offer a wondrous smile to the folks in attendance and watching at home, seasoned NBA observers had to think: does this boy have any idea what he’s in for?

It isn’t just the fact that he is now an LA Clipper. That was pretty much a foregone conclusion after the lottery. Even the Clippers aren’t going to trade away the No. 1 pick in a draft that is, well, one player deep. But throw in the fact that Griffin is the No. 1 overall pick and a Clipper and that is a combustible mix, the draft equivalent of hooking Clippers owner Donald Sterling up to a lie detector machine.

You are just waiting for everything to explode.

It’s not Griffin’s fault, to be sure. I suppose his agent could have made a stand, although that tends not to work these days; remember how Dan Fegan said that Yi Jianlian was never going to go to Milwaukee? And the Clippers do reside in Los Angeles, which is not to be confused with, say, Milwaukee or Minneapolis.

But do you think Griffin knows that there is as much space devoted in the Clippers Media Guide to player numbers as there is to playoff history? Do you think he knows that of the last 10 lottery picks the Clippers have made, and they make one just about every year, only three are still on the roster?

And do you think he has any idea about the previous two No. 1 overall picks the Clippers had – and what happened to them? It’s not promising.

Danny Manning was the Blake Griffin of 1988, except even better. He was a 6-foot-10 magician with the ball, drawing comparisons to Larry Bird and Magic Johnson. He was coming off a season which saw his college team, the University of Kansas, win the NCAA title. He was as consensus a No. 1 pick as there was – and the Clippers did not flinch in making this pick. It was the right thing to do.

This was, however, before the days of the rookie salary cap and the late, great, Ron Grinker represented Manning. It was a bit of a change for Grinker, whose clientele usually consisted of borderline NBA guys. (He was dubbed the ‘Broadway Danny Rose’ of agents for that reason.) Grinker and Sterling went nose to nose amid threats of holdouts and lines in the sand and, eventually, Manning signed.

Twenty-six games into his rookie year, Manning blew out his right knee, tearing the anterior cruciate ligament. His season was over; so was his team’s. The Clippers were in a stretch where they would go 1-28 in the months of January and February.

Although Manning recovered and played well enough in Los Angeles to be chosen to make two All-Star Game appearances in 1993 and 1994 – the latter coming a few days before he was traded to Atlanta for Dominique Wilkins – it is the knee injury that sticks to his Clipper Days. (You would be hard pressed to find an article from that time that doesn’t mention Manning and Tony Daly, the Clippers’ orthopedist, in the same sentence.) Oh, yes, the the Clippers made the playoffs in consecutive seasons for the first time with Manning. They lost in the first round both times.

Manning never became the star di tutti that everyone thought he’d be. He picked up a Sixth Man of the Year Award in 1998 with the Suns, a few years after he tore the ACL in his other knee during a practice in Phoenix. He ended up playing for seven teams and it’s safe to say he won’t have to spend any time waiting for the phone call from Springfield. But no one – and I mean, no one- would have dared make that statement on Draft Night 1988.

Then came 1998, a decade later, and the Clippers again had the No. 1 overall pick. Among the names available that night were Paul Pierce, Mike Bibby, Vince Carter, Antawn Jamison and a young, unknown German named Dirk Nowitzki. Confronted with all these possibilities, the Clippers instead selected Michael Olowokandi, from the University of the Pacific, mainly because he was (a) 7-feet tall and (b) full of promise.

Five years later, after playing his final game for the Clippers, Olowokandi was still (a) 7-feet tall and (b) full of promise. A few years later, he was out of the NBA, as Pierce was becoming the MVP of the NBA Finals and the other aforementioned fellows were annual All-Stars or All-NBA selections.

The Clippers weren’t alone in their interest in Olowokandi. He was pleasant chap from across the pond who was appealing because he supposedly was uncorrupted by the AAU culture of American basketball and, thus, open to the possibilities of actually learning. (Read: The anti-Stephon Marbury.) Five seasons in a Clipper uniform, only one of which could be deemed remotely productive, left him with the reputation of, well, a pleasant chap open to learning. He still is that.

But while Carter, Pierce, Nowitzki and Bibby all won awards and/or took their teams into the playoffs, the Clippers remained the Clippers. Their best year with Olowokandi resulted in 39 wins. There were no playoff appearances in five years. More to the point, the Clippers never bothered to re-sign the kid – almost automatic with a No. 1 pick these days, even if your name is Andrew Bogut and you’ve done nothing to deserve am extension – and then let him go to free agency, unrestricted. Kevin McHale, then the Timberwolves’ basketball boss, signed Olowokandi, doing a good deed to his friend and college roomie, agent Bill Duffy.

Hopefully, for the Clippers and Blake Griffin, this will be a different story. But it’s hard to make a case for the kid. The Clippers were bad last year and the Western Conference is brutal.

But just when everyone thought things might be changing for the Clippers, after their wonderful playoff run in 2006, things went south again. Franchise stalwart (and the universally loved) Elton Brand ditched them for the 76ers, with the Clippers crying foul (and worse.) Baron Davis came aboard, supposedly to join Brand, and did . . . absolutely nothing. Injuries decimated the team.

But they won the lottery!

And, for all of you basketball-loving fans out there, the address to send Griffin his condolence cards is: