Bostjan Nachbar: "Unless something dramatic happens, I'm going to Turkey"

Bostjan Nachbar: "Unless something dramatic happens, I'm going to Turkey" 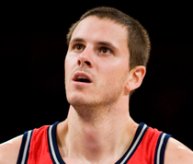 How was the Russian experience for you?

Bostjan Nachbar: Overall it was a great experience. We had a great team, a great coach and we had high goals. The first half of the season was great. We played well. We were doing well in the Russian competition, doing well in the Eurocup… After New Year, as everybody knows, the financial situation got worse, problems started kicking in and there were a lot of players leaving. We lost Hollis Price, Jannero Pargo, Travis Hansen… They started leaving one by one and we didn’t finish well. We missed our goal, which was qualifying for the Euroleague… From a basketball standpoint, otherwise it was great. My season was good. I played well, had no injuries… So that was good. But there was a point where the team was unable to keep paying the players.

BN: They still owe like 30-40 percent of my first-year salary. We are in negotiations to get that money. Worst-case scenario, I’m taking it to the court.

How different was the lifestyle you led in Russia compared to the NBA?

BN: It was different. First, there was not a lot of people in the stands. You’re used to playing in front of 15,000 or 20,000 people in the NBA and then you go to Russia and there are games where there’s barely 1,000. That was horrible. It was a big difference. That’s the biggest thing. Second thing, Moscow is very different to New York… Although it was not a bad city. I got used to living there. I got adjusted pretty well. Besides, the  team had its own plane and we stayed in good hotels… Some things were good and some other things were not good, but it was a nice experience.

What advice would you give to NBA players thinking about leaving to play in Europe? There’s a rumor about Nate Robinson going to Greece today,  for example. What would you say to guys like that?

BN: They have to be careful when choosing the team. That’s the most important thing. When I was choosing Dynamo, I spoke with players that had  been there the previous three years and they had no financial problems whatsoever. They were getting paid on time and the club was organized…  So when I was in that situation last July, there were no worries about that team having trouble. Anyway, it’s always a little bit of a gamble in Europe  because there are not as many laws as you have in the NBA, where every team has a set budget and they know before the season how much money they are going to spend. In Europe, a lot of teams go month by month. They try to get more sponsors, try to get more money, so it’s a little bit of a risky thing. Anyway, I think most of the Euroleague teams, especially the top ones, they are OK. You’re out of trouble. And you’re not going to find much trouble with most teams in Spain, Italy, Greece… They are fine. But especially in Russia this year, a lot of players that went left disappointed because a lot of teams were just not able to fulfill the agreements.

So do you regret your decision a little bit right now?

BN: No, not really because, like I said, when I made the decision last July nobody knew that things were going to turn this bad. Not just in Russia, but all over the world! Look at the economy: How bad it went and how fast. Out of 10 times in the same situation, I would have made the same decision 10 times in a row. The contract was so good, the team was so well put together, the coach was great… It was a no-brainer for me at that time.

You announced on Twitter yesterday that you were going to make a decision on your new team today or so. Have you made a decision already?

BN: I’m really close to signing a contract with Efes Pilsen, the Turkish champion, for one year. They’ve been calling me for the last two weeks and I’ve been  postponing it because I was trying to get a good NBA contract. But I don’t want to let go this offer from Efes because financially it was so much stronger than anything in the States, especially with the market in the NBA being so tight this year and good players getting such low contracts. It’s hard to get a long-term, solid contract. So it makes sense for me to wait one more year and go for free agency then. Unless something dramatic happens today, it looks like I’m going to sign with Efes Pilsen.

From the basketball standpoint your first choice was the NBA, though. Right?

BN: Yeah, yeah, of course. When problems started happening in Russia, I spoke to my agents and told them to start looking for a team in the NBA.  There was a lot of interest. I had to say probably there was a lot more interest than last summer. Not probably; for sure. There were more teams calling, there were more teams in conversations. But it’s a tight market this summer. As you can see, a lot of teams are saving money for next  year’s free agents. So it’s tough to get a long-term deal, which is what I was looking for. You know, a three- or four-year deal that would bring some security. I made my mind that it’s probably the best decision to play here one more year instead of landing just a one-year deal in the NBA. A lot of times, it’s just a matter of timing. Looks like this summer it was a bad time for me to do that.

Can you name any of the NBA teams that were expressing interest?

BN: There were really a lot. I don’t want to put anybody out there on the spot because I was asked not to talk about it. What I can say is, there were teams (interested) that I have played for before and some teams that I haven’t. You can figure out what those are. Let’s say that there were at least 10-15 teams that called last season or this offseason, so there was a lot of interest. But those teams were not able to offer anything at this point. What they were offering, I was not interested in.

You had a very good season with the New Jersey Nets. Why do you think that team was such a good fit for you?

BN: I think I fit in mainly because that team was constructed around Vince Carter, Jason Kidd and Richard Jefferson and they needed someone to come off the bench and bring a spark. And I think that’s a role I fit in perfectly. Most of the games I was coming in when the team was down a little bit. So I came in, made a couple of plays and turned the game around. That was my role and my teammates appreciated that. I felt comfortable  and it was a perfect place for me. I was disappointed to see the team fall apart when Jason Kidd got traded, RJ got traded and so on and so on. I always thought that if we had been together for another season, we could have had a chance to go further in the playoffs. But it’s the NBA. Things like that happen.

Why have you decided to play with Slovenia this summer, as opposed to past seasons?

BN: You know, the last couple of seasons I was really tired. Those NBA seasons where I played a lot of games, I was tired and at the same time I wanted to get ready for the following year. I took those two summers off. Prior to that, I think I played five, six or seven summers in a row. I just needed the rest mentally and physically to get back ready for the following season. This season ended early for me and the (Slovenian) Federation was pushing strong to put all the great players together. With such a talented team, it would be a waste not to be with them and win one of the  medals. Pretty much all the players that were healthy decided to play this summer and I didn’t want to be the exception, so I accepted the invitation. Hopefully we’ll have a good result.

What would be a realistic goal for the team? You have a shot at the gold medal?

Finally, you’ve dunked on several great players in the NBA. Which dunk was your favorite?

BN: Oh, that’s a tough one. I don’t know. Maybe against Philadelphia, the one against Dalembert. It was a great dunk. My game always was about going aggressive into the basket and if I get fouled, I get fouled. If I dunk, I dunk. But I will always do my best to go strong to the basket.