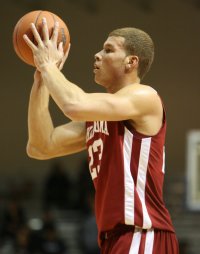 It’s the waning moments of a 15-point game in the summer league. Many of the fans already have hit the Strip, and they’re doubling down.

Meanwhile, Blake Griffin literally is down.

While it would have been easy for Griffin, the NBA’s top draft pick for the Los Angeles Clippers, to cruise during garbage time, he instead dug in against Alan Anderson of the Los Angeles Lakers and drew a charge.

Subtle things such as that impressed the Clippers’ brass when the power forward from Oklahoma made his debut Monday night at the NBA Summer League in a 93-82 win over the Lakers at UNLV’s Thomas & Mack Center.

Yes, Griffin made his first eight shots and finished 11-of-15 while scoring a game-high 27 points. But one must consider that guarding him, or at least trying to, were the likes of Chinemelu Elonu, David Monds and Ben McCauley, who will not be joining Ed Macauley in the Hall of Fame.

Griffin realizes he’s got a ways to go. Despite also grabbing 12 rebounds, what do think Professor Griffin said when asked to grade his performance?

B-minus? This guy sounds like more of a perfectionist than Michelangelo during the four years he spent on his back painting the ceiling of the Sistine Chapel.

“I did some things wrong defensively,’’ Griffin said of the surprisingly low grade he gave himself. “That’s the hardest part for me.’’

Offense sure looked easy, especially at the start of the game. Griffin scored his team’s first seven points, making a layup, a leaning banker from 15 feet after a spin move and a three-pointer.

Griffin’s quick start thrilled the crowd, which numbered about 4,000, impressive for a summer-league game. In fact, this marked on of the most anticipated summer-league debuts since Cleveland’s LeBron James played before a full house in Orlando in the summer of 2003.

It was a big enough that NBA commissioner David Stern, in town for NBA owners meetings, had a courtside seat.

“That was cool,’’ Griffin said. “It was great to see (Stern) there actually watching, knowing that he cares and he pays attention about games like this. It’s not quite the NBA Finals, but he made it out.’’

Griffin impressed the commissioner and others with his athleticism, showing he can handle the ball while bringing it up a few times on the break. Griffin had just one assist, but he did have a pair of nifty passes down low in which fouls wiped out likely layups by the recipients.

Griffin made one such pass to Dionte Christmas, who then hit a pair of free throws. How’s that for a Christmas gift?

The Clippers, meanwhile, can’t help but continue to feel good about the gift they got by winning the May 17 lottery.

“He’s playing great, doing all the things we thought he could do,’’ said Clippers coach Mike Dunleavy. “He rebounds, he handles the ball, he scores, he passes, and he runs a lot.’’

OK, so Dunleavy didn’t immediately mention defense. But it’s just one summer game, and no doubt the coach wants to see more, even if he was pleased with Griffin’s late-game drawn charge.

It also was interesting that two post-game comparisons involved players hardly known for their defense.

“(He’s a) big that combines speed and power,’’ Hughes said. “He reminds me a little bit of George McGinnis.’’

Then there was this from Lakers forward Adam Morrison, who was referring to Griffin, listed at 6-foot-10 but having been measured without shoes at 6-8 1/2, not being the biggest power forward around.

“He’s like (Charles) Barkley in that he’s a guy who’s a smaller (power) forward, but he’s really athletic and can put it on the floor and shoot,’’ Morrison said.

Griffin did surprise some folks when he showed off his range by drilling the early three-pointer, his only such attempt of the game. The Clippers don’t want him to get too comfortable out there, but he has the green light to fire away if it helps keep defenses honest.

Griffin also likes to use the glass on many of shots, and he likes the finger roll. All of that provides an old-school feel to his game.

“That’s kind of the way I learned it,’’ Griffin said. “I love using the glass. It gives me a comfort level. I guess that’s old school.’’

One thing that sure is old school is taking a gutty charge even if the game long has been decided. And we’re talking about a summer game, mind you.