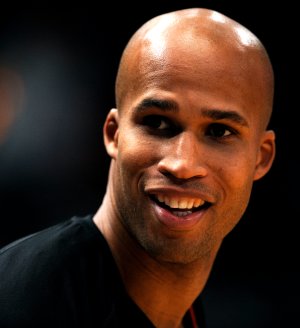 Robin Hood, who stole from the rich and gave to the poor, would have no place in today’s NBA.

These days, it’s the NBA rich who pilfer from the poor.

San Antonio was only too glad to take off Milwaukee’s hands the big contract of forward Richard Jefferson while giving up little. Cleveland gladly found room for center Shaquille O’Neal while helping Phoenix cut costs. One presumes New Jersey will spend money during the big free agency summer of 2010, but the Nets for now had a clearance sale, and sent forward Vince Carter to Orlando.

“I think teams are in different situations,’’ said Suns general manager Steve Kerr. “There are situations when you want to go for it because you’re close. Other times, you’re far away so you’ve got to position yourself in the future.’’

With the economy faltering, the future could mean a luxury tax for 2010-11 more than $5 million below 2009-10’s $69.92 million figure. With the salary cap going down, it also means teams really will have to crimp and save for money to use on a star-studded free-agency class, which could include the likes of LeBron James, Dwyane Wade and Chris Bosh.

But heck with the distant future. Spurs star Tim Duncan is 33 and, if he is going to get a ring for his thumb, he better be fitted in a hurry. Team officials are trying to comply.

In addition to Jefferson, in which San Antonio paid the small price in a three-team trade of dispatching Kurt Thomas, Fabricio Oberto and Bruce Bowen, the Spurs also signed free-agent forward Antonio McDyess and had burly forward DeJuan Blair fall into their laps in the second round of the draft.

The general consensus at the recently concluded NBA Summer League in Las Vegas was San Antonio is the big winner so far the offseason. And this is coming after the Spurs, who have won four of the past 11 NBA titles, were beginning to look old and hobbled, with their other thirtysomething star, Manu Ginobili, missing much of last season due to leg and ankle problems.

“I think San Antonio helped themselves in my mind more than anybody,’’ said Sacramento director of player personnel Jerry Reynolds.

“I think San Antonio is really good,’’ said Denver George Karl. “And it seems like they made decisions to be a (luxury-) tax team, which they never have before.’’

Well, if the Bucks wanted to give away a 29-year-old forward in his prime, the Spurs weren’t going to complain.

As for some of the other big moves involving the top teams, there is more debate. O’Neal looked resurrected last season with the Suns, but, at 37, it remains to be seen if he will mesh well with James or slow down the Cavaliers.

“A lot of the top teams have gotten better,’’ said Cleveland coach Mike Brown, whose team had the NBA’s best record at 66-16 before being upset by Orlando in the Eastern Conference finals. “Every time you look, the elite teams are beginning to get better… So it’s going to be tough… I think we’re better on paper, but I think we’ll have to wait and see.’’

“There’s an arms race in the East,’’ Kerr said.

While heavyweights Orlando, Cleveland and Boston are leading the way, at least a few other teams in the East are desperately trying to gain admittance to their country club. Toronto acquired Turkoglu, Detroit signed Ben Gordon and Charlie Villanueva and Washington picked up Randy Foye and Mike Miller from Minnesota.

“One of the things that Joe (Dumars, the Detroit executive) has talked about is putting ourselves in a position to win right now,’’ said Pistons first-year coach John Kuester.

As far as who reloaded the best in the East, Washington forward Antawn Jamison, while he likes his team’s moves, calls it the Celtics. They won the 2008 NBA title, but fell in the second round of the playoffs last spring after star forward Kevin Garnett had been lost for the season with a leg injury.

But now the Celtics have a security blanket up front in Wallace. And nobody in town will complain if both are healthy.

“I like what Boston did,’’ Jamison said. “They didn’t have a healthy K.G. during the playoffs and they still were able to make some noise. Now, you add a guy like Rasheed Wallace to a team that already has matchup problems for anybody.’’

Of course, there’s always the problem that Wallace, who did keep it in check long enough for Detroit to win the 2004 NBA title, could implode again. That’s also a risk out West in Los Angeles, where the defending champion Lakers signed free-agent forward Ron Artest while free-agent forward Trevor Ariza bolted to Houston, Artest’s former team.

“They could be (better) or there’s a chance the chemistry doesn’t work,’’ Karl said. “I love Ariza. Ariza was a very hard worker, but there’s no question that Artest is as good or better.’’

Of course, the next big question for the Lakers is whether forward Lamar Odom will re-sign as a free agent. Odom played an instrumental role for the Lakers as they beat Denver 4-2 in the Western Conference finals and in their 4-1 Finals win over Orlando.

The Nuggets are the only conference finalist from last spring who haven’t brought in a big-name player. Other top West teams that haven’t made huge moves are Utah, which is trying not to see its payroll explode, and Portland.

But the Trail Blazers, with about $9 million of cap room, sure have been trying. They lost Turkoglu at the 11th hour to Toronto, and had the Jazz match an offer sheet extended to Paul Millsap.

Also trying hard has been Dallas. The Mavericks acquired Shawn Marion in a sign-and-trade from the Raptors, and but had an offer sheet extended to Marcin Gortat matched by the Magic.

The word from Denver’s Mark Warkentien, the reigning NBA Executive of the Year, is that a lack of head-turning activity by his team doesn’t necessarily mean anything at this time of the year. Warkentien made the move of the year in the NBA last November by acquiring point guard Chauncey Billups from Detroit.

“Our marquee moves have never been in July,’’ Warkentien said. “It doesn’t mean that there isn’t a marquee move out there.’’

Warkentien is right. Not all big NBA moves come in July.

The Lakers got all this rich stealing from the poor in full gear when they pilfered big man Pau Gasol from Memphis in February 2008, shortly before the trade deadline. All Gasol has done is help lead the Lakers to the past two NBA Finals.

Interestingly, after that deal, in which the Lakers sent Kwame Brown, Javaris Crittenton, the rights to Marc Gasol and a pair of first-round draft picks to Memphis, an incensed Popovich blasted the Grizzlies, saying there needs to be a trade committee to oversee NBA deals.

One wonders if such a trade committee would have approved the Jefferson heist.