Earl Watson: "I signed with the Pacers because they want to win now"

Earl Watson: "I signed with the Pacers because they want to win now" 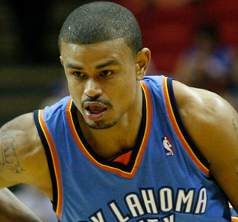 What does it mean for you to play for the Mexican National Team?

Earl Watson: For me it’s bigger than just basketball. My grandfather who came over here from Mexico, I don’t think in his wildest dreams in his journey to the United States of America would have thought his grandson would go to UCLA and then to the NBA. For him to actually have the courage to take that step to go to another country… That for me is an amazingly strong thing to do. And that created opportunities for me generations later… Playing for Mexico is for me a way to give back all that appreciation to that part of my family. I never had a chance to meet my grandfather because he passed away when my mom was 20. But this is a way to represent a piece of him and I’ll do that in any way I can.

Who’s prouder about you playing with Mexico? You or your mother?

EW: Oh, my mom is extremely excited. Extremely excited by this opportunity. Just to see it happen is great for her. Her father was her everything. Doing this for him is the ultimate gift I can give her.

Do you know any of your teammates?

EW: I know Eduardo Najera because I played with him in Denver. That’s actually how it came up. We were talking one day and the subject came up and he was like, “Your mother is Mexican?!”

So it’s all his fault.

EW: Yes, yes, it’s all his fault. And you know, talking with my people and my agency, there were questions because it was a free agency year. Then Indiana came up and put so much faith in me. What I don’t wanna do is get injured. But also, what I wanna do is having the honor of representing the country of Mexico because it’s a privilege. At the same time, it’s also a honor to play in the NBA and be a part of the Pacers.

Aside from Najera, do you know any of the players?

EW: Lorenzo Mata, who played for UCLA, is also on the team. I’ve known him for a while. There’s a couple of players that I saw on the team that I saw playing in Vegas.

Do you speak any Spanish?

So when you’re with the team, what’s going to be the main language? Because a lot of players are actually Mexican Americans…

EW: We’re probably going to speak Spanglish (laughs). A little bit of both. But you know, basketball is going to be the main connector. Language is important for the little details, to get the strategy across. But when you’re on the court? Basketball is basketball.

You recently signed with the Pacers. What was the team’s main selling point for you in order to sign with Indiana?

EW: That they wanted to win right now. They are committed to building a championship team. There’s a sense of urgency there. They want players to be accountable on and off the court. That creates responsability and accountability. For me, that’s exactly what I was looking for at this point of my career. I think we have a strong enough team to make the playoffs this coming season. Not five years from now or three years from now. Right now. Besides, it’s a great team and a great organization with a great tradition. I was a fan of the team before, when they had Mark Jackson, Rik Smits, Reggie Miller and others. They got close to winning a championship. And I’m a fan of basketball and a fan of teams that win. Larry Bird, Coach O’Brien… It’s just so many people involved. And they have a great young nucleus… But it’s a young nucleus with a lot of experience.

You looked like a good fit for some of the contenders. Did you hear from them?

EW: I just came to this decision kind of quick. The other teams came in late. The thing is, I connected with the people in the Pacer organization so quickly… It was actually the team that I thought was going to draft me. I didn’t think Seattle was going to draft me. Seattle had to pick before before Indiana, but all along I thought I was going to Indiana. It’s kind of like a reuniting of the beginning.

Was last season tough for you, having to go back to the bench after starting most of the times the previous year?

EW: I just think the Oklahoma situation was a unique situation. It was a transition period. The way it was going, there were indications… Losing Ray Allen, losing Rashard Lewis, losing Luke Ridnour, losing Delonte West, losing Kurt Thomas, losing Joe Smith… You see it coming. If they let Ray Allen and Rashard Lewis leave, there’s only going to be a snowball effect your way if you’re not part of the new transition. It’s just business. It was never personal for me. It was a great experience. You learn a lot from your toughest moments. Your learn a lot about yourself and other people. But you move forward and you stay professional! Always stay professional! Something good has to happen if you do things the right way. Everything worked out the way I wanted it to work out. I’m in a great situation. It’s was all worth to go through that to get to this point.

You saw Kevin Durant in practice every day the last couple of years. What kind of player do you see him becoming?

There were even comparisons with LeBron James a few days ago. Do you think he can get to that level?

EW: I don’t think you can compare KD to LeBron – the same way you can’t compare LeBron to Kobe. They are all great players, but they are all unique and different. Players in the future will be getting compared to Kevin Durant. He will make his own mark and have his own path.

Do you have the feeling that you have been backing up players at the point guard position that really were not better than you?

Of all the teams you’ve played for, where did you feel more comfortable? Was it Memphis under Hubie Brown?

EW: Absolutely, because of the way he spoke the game. Because of his passion, his knowledge of the game. The way he communicated and talked were both unique. And it was specific for each player. That’s what I loved about him. He didn’t have plays for Mike Miller that he had for Shane Battier. Or James Posey. Or Bonzi Wells. Everyone had their unique style of playing, but he made them do it within a team concept using their individual skills. It was amazing how he managed the details of the game. We also had Jerry West there. We have those two guys at the same time, which was amazing.

What went wrong with the Grizzlies and Hubie Brown? Why it had to end?

EW: I think I told Coach this, “The only thing I regret is not being born earlier to have a chance to play for you my whole career.” He was the type of coach that just captured the moment and captured the team. He took the ego out of the team. It all became about the team. Talking to him, a lot of times I had memories of talking to Coach Wooden. I once asked Coach, “What was the common thing about all of your championship teams?” And Coach said, “The common thing was that no one cared who got the credit.” Everyone bought in. I will always remember that. I was like 18 or 19 when I asked him that.

And with Hubie Brown it was the same. Hubie Brown would always say, “No one will ever ask you how many points you scored. You know why? Because you’re winning games, chap!” He was very similar to Wooden, but he was at a time in his life where he couldn’t give his all. It was a time where he gave all he could and turned the organization in the right direction. I think he left everything good, with the team winning and having a foundation to it.