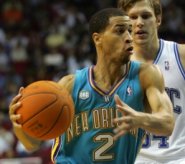 Sources tell HoopsHype.com that European powerhouse Olympiakos will soon be facing a grievance filed through FIBA’s Arbitral Tribunal related to outstanding payments from the 2008-09 season due to Bulls guard Jannero Pargo.

Olympiakos, who has consistently been one of the top teams in Europe for the last two decades, has been mentioned this summer as a possible destination for free agents like Allen Iverson, Nate Robinson and Linas Kleiza.