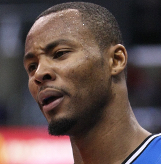 Either you believe him or you don’t. Either Rashard Lewis knew what he was doing or was a hopeless naïf.

There were times in the conference semifinals against the Celtics when I wondered if Lewis was even aware there was a series going on. Then there were times when he was an absolute beast, a matchup nightmare for which Doc Rivers never did have an answer.

Frankly, I think it’s hard to make a case for Lewis as a deliberate evil-doer here. Maybe I’m the hopeless naïf – always possible – but if you had to identify a steroids miscreant on the Magic, Lewis wouldn’t even be under consideration. That’s what was so shocking about the revelation: it was the skinny Lewis who got nabbed, “one of the best people in the league,’’ according to Magic coach Stan Van Gundy.

Lewis has owned up to the transgression and he did so in an honest, thoughtful manner. I haven’t had a lot of face time with Lewis over the years, but when I did speak with him, he always was respectful and accommodating. While in Seattle, he was mentored by Ray Allen, as classy an individual as there is in the NBA.

His next NBA season will be cut short by at least 10 games, but this is really the first time that Lewis has been in any kind of hot water with the league. He can’t be blamed for agreeing to the ridiculous contract that Orlando offered him a couple years ago, but you could argue that he might have felt overwhelmed by the deal and the attention that he felt he had to do everything he could to live up to it. (That was A-Rod’s excuse in Texas.)

But Lewis said the banned substance was taken at the end of last season, which would explain the timing of the announcement. He said it came from an over-the-counter purchase of a powdered nutritional supplement and that he wasn’t aware it was in there. As he told the Orlando Sentinel, “I would never, knowingly, put any sort of substance or steroid into my body that is against the rules.”

At least he didn’t say he was blindsided.

And he also knows he’s subject to four random tests a year, all of which, presumably, he had passed in the past.

The NBA isn’t immune to these types of things; far from it. It tackled the drug problem head-on in the 1980s, but PEDs were not part of the dialogue back then. They are now and the NBA’s policy is quite clear: 10-game suspension for a first violation, 25 games for a second, one year for a third and ban for a fourth. The policy also stipulates that if a player comes forward voluntarily and admits to using a PED, there is no penalty.

Lewis may be the most prominent name, but there are others. Darius Miles was suspended for 10 games last season and, like Lewis, said he was unaware he had done anything wrong. Chris Andersen was kicked out of the league for two years, got his life back together, was allowed to return, and played so well he now has a new contract.

Lewis won’t be the last one and, for all we know, he’s not the only one. He just got caught. He made a mistake. He admitted he made a mistake. He apologized for it. He accepted the punishment. He has vowed to be more careful in the future over what he puts into his body. His organization has been supportive while also recognizing it has, as they say, a “teachable moment” before it.

In an utterly informal and unscientific poll, the Orlando Sentinel asked visitors to its web site to decide: was Lewis an innocent dupe or a cheater? Of the first 273 responses, 268 decided he was a dupe. So the fans are on his side. At least those fans.

We’ll have to wait for the memoirs to see what really happened. Did he actually feel any different? Better? Would he have continued using it if he hadn’t got caught? And no matter what he does the rest of his career, there will always be a line referencing the suspension, probably near the top, of any Rashard Lewis biographical web entry.

But, on the whole, Rashard Lewis has been, as Van Gundy said, one of the league’s top citizens over the last decade. In the court of public opinion, that should count for something. A whole career of staying out trouble should trump this one transgression.

In other words, I believe him.