Kurt Rambis in the Frozen Tundra

Kurt Rambis in the Frozen Tundra 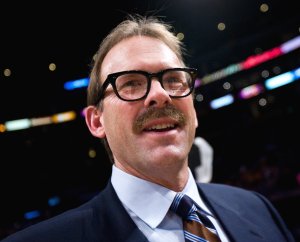 What did they do with the beach, Toto?

Actually, Kurt Rambis, who got four rings as a Laker player wearing horn-rim glasses with “Rambis Youth” fans, and three more as an assistant coach, wasn’t exiled to Minnesota, he took over the Timberwolves of his own free will.

He’s not out of his mind, either. Of course, for a beach guy with a year-round tan, who spent most of his career in an organization with limitless resources, it won’t be exactly the same.

Still, Rambis wanted to coach again, after bombing—or being bombed—in his 37-game debut in the lockout-shortened 1999 season, although that can be summed up in two words: Dennis Rodman.

If Rambis never had a chance—Dennis was far beyond wanting to play, or sobriety, for that matter—it took 10 years for Kurt to get another chance.

All the while, Jerry West, who always had a keen eye for young coaches, has been recommending Rambis all over. Phil Jackson, who arrived leery of Kurt, who scouted for a year after being fired before joining Phil’s staff, became a big supporter. By the end, Kurt was Phil’s top lieutenant.

Rambis was also as Laker Family as Laker Family got with his wife, Linda, who works for the team, best friends with Jeannie Buss. Nevertheless, the cold reality was that Kurt wasn’t ever likely to succeed Jackson.

Kobe Bryant’s idea of Rambis as a head coach was formed in 1999. Actually, Rambis foundered trying to heal the breach between Kobe and the other players, which was so deep, Kurt fell in. In one meeting, Rambis urged the other players to consider Kobe’s age. Point guard Derek Harper got up and said that was crazy, it was Kobe who had to adjust to them. Harper lost his starting job, the rift stayed where it was, and wound up consuming them all.

If Bryant is down on Rambis, or merely OK with him, Kobe has others he’s passionate about: Hornet Coach Byron Scott, Laker assistant Brian Shaw… or my bet–Duke’s Mike Krzyzewski, whom he reveres from their Olympic experience.

Actually, Rambis’ first chance at a coaching job this spring came from Sacramento, if you want to call it that. The Kings, who are almost paying ex-coaches enough to hire Phil Jackson at $11 mill per, offered Rambis two years at $1.5 million, their way of offering him a blindfold, a cigarette and a 401K before turning him over to the firing squad of fate.

In Minnesota, Rambis got four years and $8 million. Even if things don’t work out, he’ll last long enough to get a chance with a lot bigger 401K.

The hiring went over well in the Twin Cities, which is saying something for a market that snickered at the Timberwolves when they were making the playoffs annually but getting knocked out in the first round in their first six post-seasons.

In those days, when they had Kevin Garnett, Flip Saunders, Chauncey Billups, et al., their actual failing was being in the West, averaging 49.5 wins in the last four.

At 0-5, they finally crashed the top four to earn home-court advantage for the first time… and found themselves facing a Shaq-Kobe Laker team that had sandbagged its way to No. 5, and knocked the Woofies out in the first round again.

Not making the playoffs went over worse, as did trading KG, letting Sam Cassell and Latrell Sprewell move on, firing Flip, and their great 2006 draft-day deal, Brandon Roy for Randy Foye. These days, the Timberwolves are doing well when the community even notices they’ve done something.

The Wolves have actually struck off in a bold, new direction, hiring a dynamic, whip-smart Pres. David Kahn, who fired the Old Tradition Personified, Kevin McHale.

(I should note that David is one of my oldest friends and has been telling me how smart he is for decades, starting when he interned at the Los Angeles Times. Of course, if I claim to be his mentor, I have to account for failing to teach him how many point guards to draft in the same lottery.)

It’s fashionable, or mandatory, to sneer at McHale, who’s actually one of the coolest people in the NBA, even if he’s a little on the stubborn side (the Lakers offered him Lamar Odom and Andrew Bynum for KG, instead of Al Jefferson and all those Celtics who are no longer there.)

What is forgotten is what McHale did for the laughingstock franchise he took over with Christian Laettner and J.R. Rider, whom Kevin cleaned out en route to making the Timberwolves respectable, even if that was as far as they got in the West.

Unfortunately, owner, Glen Taylor, an approachable guy with deep pockets, was too loyal, if anything, giving McHale a blank check. With Kevin still in that great player’s mode of not wanting to explain himself, and with no one telling him he had to, they had the worst of both worlds, a mom and pop store that was not only low-powered but arrogant, freezing out the local press from the most mundane information.

Not that they didn’t come off well, but Kahn could have fired McHale, resigned the next day, and gone into the Twin Cities Hall of Fame.

David stuck around long enough to choose Johhny Flynn and Ricky Rubio, both point guards, at Nos. 5 and 6. Let’s just say it’s a good thing for all concerned Stephen A. Smith was no longer at ESPN for that one or he might have died of apoplexy on the set.

Kahn is now trying to coax Joventut Badalona to lower that $8 million buyout on Rubio’s contract, with no success so far.

Being a friend, I’m rooting for Rubio to stay where he is. With the excitement that grew around him, the mystique around Ricky will only grow by next spring, when they may be able to trade him for a top pick in a better draft, which could include big men like Ed Davis and Cole Aldrich.

Rambis’ arrival was almost as popular as McHale’s departure. The Minneapolis Star’s hard-nosed Pat Reusse called it “the most impressive coaching hire in the team's two decades” noting Kurt is their first who could have been hired somewhere else.

It’s not that there’s nothing to build around… especially if you like power forwards. They have one established star, Al Jefferson, and one intriguing one, Kevin Love. At point guard Flynn, a warrior type with tremendous athleticism and leadership coming out of his ears, looked great in Las Vegas and then there’s Rubio/whoever they get for him.

Of course, if they win 30 games, Rambis will get coach of the year votes.

On the positive side, no matter how peculiar David’s insights, he won’t try to bring back Dennis Rodman. I don’t think.