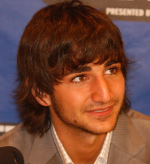 The spin coming out of the Twin Cities now is that Ricky Rubio has a chance to grow, mature, develop and play at a high caliber in Europe for the next two years before joining Minnesota in 2011.

What, he couldn’t do that in Minneapolis?

Of course he could and, if Rubio really, really, really wanted to play in the NBA this season, he would be checking out the real estate in Minneapolis-St. Paul today. He has always been described as creative with the ball. He proved this week that he’s pretty creative without the ball as well.

The Timberwolves’ inability to get Rubio into the NBA this season has to be viewed as a major disappointment, president David Kahn’s comments notwithstanding. (At this point, I, like pretty much every NBA writer over the age of, well, never mind, can recall the days when Kahn worked in Portland covering the Blazers for the Oregonian. We all know him and like him.)

Minnesota used the No. 5 pick in the draft and, no sooner than you could say Fran Vazquez, found itself trying to work out a deal to get the kid across the pond. It was Rubio, or those acting on his behalf (more on that later) who, after all, had put his name in for the draft. That would seem to indicate he had an intention to play in the NBA for the 2009-10 season.

Kahn spent so much time in Barcelona over the summer that he had his own table at Los Caracoles. He finally worked out a deal to finance the exorbitant buyout from Spanish Team 1 (DKV Joventut) only to discover that Spanish Team 2 (Regal Barcelona) jumped in and ponied up, securing Rubio’s services for at least two more years.

Rubio then said a move to Minnesota was too risky and complicated at this time, a somewhat stunning revelation given that he is guaranteed millions of dollars under the NBA’s rookie contract guidelines. As for complications, well, sure, Minneapolis ain’t Barcelona and Hennepin Avenue ain’t no Ramblas. And in two years, that will all still be true.

More to the point, the Euroleague ain’t no NBA and that is why Rubio’s decision doesn’t prepare him any more for entrance into the world’s greatest basketball league. It merely delays the adjustment. Maybe he’ll be better able to handle it at age 20 than he would be now, but that is of little solace to the Timberwolves.

And in Minnesota, he would be getting the introduction to NBA 101, ranging from the travel to the back-to-backs to the long schedule to the nightly competition of the world’s best players. That is maturing, growing up and developing.

None of that will happen in Barcelona, where Rubio will be out of sight and out of mind, thousands of miles from Minnesota. To be sure, much will be expected of the kid from his new team.

By contrast, he would be under zero pressure to produce in Minnesota, where, insightful Timberwolves fans would understand, he would be getting groomed to play in the NBA with no great expectations as a rookie on a bad team.

This is what the Spurs did with Tony Parker, although Parker did not join a bad team. Initially, San Antonio coach Gregg Popovich didn’t even want to draft Parker. But he changed his mind after a second workout and Parker, at age 19, came to San Antonio, starting 72 games as a rookie. The rest is history. But do you think Parker would be where he is today had he chosen to stay a couple more years in France rather than work alongside Tim Duncan and David Robinson?

You have to wonder who has Rubio’s ear and who has his best interests at heart. Who stepped in after Kahn had worked out a complicated buyout from DKV Joventut and then proceeded to midwive the deal to Regal Barcelona? If Rubio truly wanted to play in the NBA, why was that not allowed to happen? (It may be possible he doesn’t want to play for Minnesota, which is another story for another day. He has not said as much publicly.)

He has an American agent (the universally loathed Dan Fegan.) He has European representatives. He has family and friends. Yes, it’s going to be more fun for the familia Rubio to have their son around. He will be rock-star famous in Spain whereas he’d be just another rookie in the NBA. He will be amply compensated in Barcelona.

But he will be no closer to being NBA-ready. That only comes from actually playing in the NBA. By staying in Spain he has delayed what Minnesota hopes is the inevitable. But in two years, who knows? The Wolves still hold his rights and he might be attractive trade bait. Or he might decide that Barcelona is just fine.