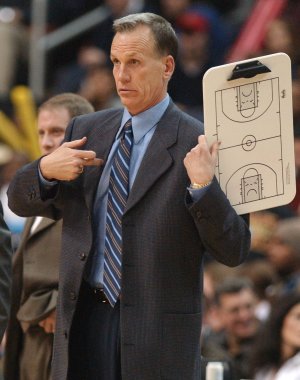 On Sept. 19, a statue of Collins and his college coach Will Robinson will be unveiled at Illinois State University. Collins averaged 29.1 points per game in his three-year college career before earning a berth on the 1972 U.S. Olympic Team and later becoming a four-time NBA all-star with the Philadelphia 76ers.

Collins talked to HoopsHype.com about these events and others pertaining to basketball.

Could you give your reaction to your Hall of Fame honor?

Doug Collins: I was shocked. I don’t think a lot of people realize. I’ve been a broadcaster 21 years, if you go back to when I worked for CBS in the 80’s. The great thing for me I have been involved in tremendous companies. It was great being with CBS and doing the NCAA tournament and NBA playoffs of course with Turner. In my career I’ve had the opportunity to play and broadcast the NBA finals, the NBA all-star game and the Olympics. And now Dick Ebersol asked me to do the 2012 Olympics in London (for NBC). I feel very fortunate.

Your broadcasting success seems to stem from being able to explain a complicated game in simple terms. Could you talk about that?

DC: That is my exact goal. One thing I learned a long time ago. It’s one thing to have a mind as a coach or player but so many people watching are casual viewers and you can’t talk coach-speak. You have to be able to articulate in a way it makes it easy for the fan at home. The fan sees what is happening. I like to say what happened and this is why it happened. Many times, it may be action off the ball. We are trained as people to watch the ball and so much of the game in the NBA and my career was played off the ball. But coach-speak is a killer. You can do that in clinics but not on television.

When you do a broadcast, what is your philosophy?

DC: Don Hewitt (the 60 Minutes creator), who recently passed away, said the essence of television was four words – tell me a story. That is my philosophy of broadcasting. Tell me a story. When you sit down to watch, there will be a story, a beginning a middle and an end. I am in charge of telling the story. As much as I might prepare, that story may change every night and you have to be so prepared.

It must be exciting to have a statue of you and your former coach Will Robinson at Illinois State.

DC: Two years ago they named the court after me, which is amazing. I got the first full basketball scholarship at Illinois State. Back then freshmen couldn’t play varsity. As a sophomore Will Robinson came in, the first black man to be a Division I basketball head coach. He was amazing. The first moment I met Will Robinson, he said, “You’ve got it and if you pay attention and trust me, I will take you where you want to go.” That was the beginning of a more than 30-year love affair with the guy.

You will always be remembered for making the two free throws after being almost knocked out in the 1972 Gold Medal game with Russia, giving the U.S. a 50-49 lead with three seconds left. We all know what happened after that, but what are your recollections of that moment?

DC: I was knocked out and was a little shaky but something that happens will resonate forever. One of the coaches was talking about getting a replacement to shoot the free throws and coach (Hank) Iba said, “If he can walk he is shooting them.” It was like an electric surge went through me. He instilled in me that I wasn’t going to miss them and I was able to come through.

This is probably a month you’ll never forget.

DC: Actually, I was going back the last 14 months of my life and it’s been an unbelievable time. Last summer my son Chris was part of the Olympic team in Beijing. Coach K brought his assistants from Duke, and he became part of the scouting and preparation. The Olympics were special for many reasons. I had 36 years of heartache when my gold medal in 1972 was taken away. Coach K and Jerry Colangelo asked me to speak to the team. As soon as the final game was over, LeBron James hugged me and said you are a big part of this and said we consider you part of this gold medal. My son was a part of a gold medal and I had that moment. And a grandson was born in January. Then my son-in-law Paul Romancazuk won a state championship (as coach for Pennsylvania’s Archbishop Carroll) and then we had the wonderful NBA playoff run and now the Curt Gowdy Award and this statue and it’s a lifetime of achievements that happened in 14 months.

How close were you to returning to coaching the Chicago Bulls in 2008?

DC: There has been the perception that I am dying to get back to coaching. What I always have done is say I will listen. It would be silly not to listen to opportunities in life. One of the great things about working for Turner is that they are about family and want what is best for my family. Two years ago John Paxson called me and I was very close to going to Chicago. They were a young team and I really saw a good 6-7 year run. Chicago is a city my wife and I spent 10 years in. Jerry Reinsdorf said he loved me like a son, and said he could always find a coach but didn’t want something to hurt our friendship and that he couldn’t fire me again. I said let’s give a hug and move on.

This past year your name was linked to both Philadelphia and Detroit coaching situations. What was fact and fiction?

DC: All this stuff with Philadelphia, I never spoke with them. I was never part of that equation. Joe Dumars called me about coming to Detroit. We spoke a few times and I don’t think situation was right for me. I didn’t want to go to a team starting over. There is perception I am itching and that isn’t case. I will keep an open mind on things.

It appears as if more teams feel they have a shot at least to get to the NBA finals than in recent years. What are your thoughts on the Eastern Conference?

DC: You have three heavyweights in the East. Cleveland adds Shaq and we’ll see if that will work to bring the Cavaliers a championship. Every day there will be questions asking whether LeBron is coming back. They added pieces, Anthony Parker, Jamario Moon are good additions. You saw last year at the three spot in the playoffs they got exposed. They love to slide LeBron to four and play small. They couldn’t do it against Orlando.

Then you have Orlando who lost Turkoglu but added Vince Carter, Matt Barnes and Brandon Bass. They are incredibly deep. I also liked moving Rafer Alston because he wasn’t happy sitting. Orlando tasted it last year and is poised to make another great run. They are very good on the road.

You have Boston, with Kevin Garnett coming back healthy, Rasheed Wallace has added depth to the team. If they are healthy they will be very good. The No. 1 seed could prove so important, because you have to play only one of those other two teams in the playoffs.

To me the next little rung, I feel Chicago is going to be good. They will have Derrick Rose, John Salmons, Luol Deng at the three and have a bigger team. They were undersized. I like that they kept Hinrich and I like Pargo off the bench. The big key for them will be young big guys Noah and Thomas and if they show the improvement they showed in playoffs when they went toe to toe with Boston.

Another team is Washington if they stay healthy. Arenas, Caron Butler, Jamison, Mike Miller, Randy Foye, Flip Saunders. If they can defend and rebound that will be a good team.

Toronto improved with Turkoglu and I like Jarrett Jack with his toughness. The Raptors will want to show they will be in the mix to keep Chris Bosh.

Atlanta is interesting. Jamal Crawford should help. I like Jeff Teague at the point. A question is the play at small forward and can it be consistent.

New Philadelphia coach Eddie Jordan runs a lot of that Princeton offense. Last year Philadelphia went with a big lineup and lost its identity. They are an open floor team. When Elton Brand and Samuel Dalembert played together with Thaddeus Young and Andre Iguodala, they had no shooting and spacing.

They lost Andre Miller and you have to wonder if they will have enough shooting.

And then there is Miami. Dwyane Wade is a one-man show and basically carried them to the playoffs. Can he do it again?

What about the Western Conference?

Portland is very good. Is Greg Oden able to stay healthy and can he take over. Can the team run more with Andre Miller?

One of the keys last year for Denver’s success was keeping Kenyon Martin healthy. He and Nene must stay healthy. Chauncey Billups had a great year.

Utah has the Carlos Boozer (contract) situation hanging over them . You can’t give him away but you have to watch what contracts you take back due to the luxury tax. If Deron Williams stays healthy, he makes them very tough at home.

I think New Orleans will be in the playoff mix, but so much is on Chris Paul and David West. Now they have Emeka Okafor, but Peja Stojakovic is key and a big part is three point shooting. If he plays like two years ago and Paul and West continue their progress, they are back in the mix. I thought they lost some mojo last year.