Celebrate MJ going into the Hall of Fame? Forget that

Celebrate MJ going into the Hall of Fame? Forget that 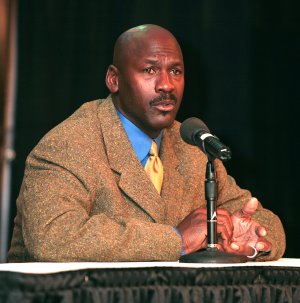 I can see Michael Jordan now, giving that little wink signaling that he was outta here and easing through the crowd of reporters squeezed in around him. Chicago Bulls PR man Tim Hallam used to call that tight circle of media a “pig fight.” That was when dozens of sportswriters and camera crews would crowd in around Jordan with their notebooks and microphones and body odor, snorting and squealing their questions, squeezing in closer to catch every word. We all knew Mike as a man who enjoyed the spotlight, but even he could stand only so much of a pig fight. In that regard, it’s no surprise that he got into the fragrance business.

It was the 1996 pre-season, and my first inclination is to recall that Jordan then was at the height of his fame, except that his fame in those days seemed to know no heights or any other boundaries.

With his signal that the interview session was over, the path out of the locker room cleared just enough for His Airness to make an escape. The piggies parted, but in a flash, the gap closed. A boy, probably 12, with a brand new basketball and a black marker, stepped out of the shadows, too dumfounded to speak, mesmerized to be in Mike’s presence.

Mike gave him that “Yo, baby, whatcha need?” look.

The young fella just stood there, his mind gone so transparent you could read it.

Mike furrowed his face and looked at the boy. “Do I get paid for this?” he said as he reached for the ball and marker. “Normally I get seven digits.”

“I… I got five dollars,” he offered hopefully.

Mike smiled. “No problem,” he replied, trying to make it clear that he was just joking.

The marker, though, was nearly out of ink, and when Jordan stroked his signature across the face of the ball, it barely took, as if he were writing on air. Jordan frowned.

A mix of horror, panic and disbelief spread across the boy’s face. He quickly jammed his hand in his pocket to bring out a raft of pens for another try.

“I thought you were reaching for some money,” Jordan said, laughing.

Jordan, of course, could be excused for thinking that the young fan was digging for his cash. For years he had been on the receiving end of an immense transfer of wealth, as just about everyone on the planet made a donation to his surging bank account, as if the universe itself was his personal ATM. Back in the 1995-96 season alone, it was estimated that Jordan raked in better than $40 million in off-court endorsement income. But that’s small change compared to 1996-97, when the numbers were buggin’, what with Mike introducing his new cologne line (it sold a jaw-dropping 1.5 million bottles the first two months on the market) and his acting gig in Space Jam, which set theater ticket sales records on its opening weekend. But that’s why they called him Money, wasn’t it? Twelve-year-olds were conditioned to reach in their pockets and offer him their allowance.

Anyway, his off-court sum that year became a tidy match to the $30 million he received under a one-year contract extension for playing with the Bulls. He would sign another monster one-year deal the following season which convinced NBA ownership that it needed to put the brakes on things and adopt a salary structure to keep mega deals from soaring off into even Rarer Air.

For all the money he made for himself, Jordan’s take was a fraction of the treasure he created for the National Basketball Association itself (not to mention what he did for the University of North Carolina Tar Heel brand). His entry into the league in 1984 ignited the NBA’s annual revenues to balloon tenfold, from under $150 million that year to an astounding $2 billion or more per season by the mid 1990s.

There were other reasons for the NBA’s growth, but by and large it was Mike.

Mike in the air, tongue out. Slammin’. Makin’ rims rattle and registers ring.

People would have paid to be like Mike, if they only could.

Instead, they paid to see him, to be near him, to wear his shoes, his jersey, to drink his Gatorade, gobble his french fries at Mickey D’s, to buy the briefs, to whack the golf balls, to read his books and enshrine his trading cards.

He even figured a way to bottle his popularity and sell it. That would be the cologne, the ultimate jock-sniffer acquisition.

This is what they call a cultural icon? It was more like madness. Mike Madness. And it was global. The NBA had long been a decidedly obscure enterprise, but Jordan’s great passion and competence made people everywhere care about it. In the 1990s, a Jordan tour business flourished, as Japanese tourists came by the thousands to be bused by MJ’s home in the Chicago suburbs, then taken to the United Center to stand in awe in front of his statue there.

In China, they called him something that sounded like Chow Dan.

“He is like a gift from God to the basketball game,” Huang Gang, a hoopster from Beijing, told reporters at the time. “We try to imitate his ground moves. But you can’t copy him in the air. He is unique.”

Indeed, dude. For more than almost two full decades, Jordan was pro basketball’s master poet while the rest of the players were mere stenographers. He was the champ and everybody else just chumps.

His other contemporaries didn’t seem to mind this too much at first because Jordan’s popularity made millionaires out of them all, hundreds of very average NBA jocks, including a couple of dozen college kids every year who signed big contracts guaranteeing them plenty of cash before they proved they could even play in the league, much less drive a team to championships.

Mike, in the meantime, tried to say on occasion that he didn’t really play for the money. But that wasn’t true. Money was just one of his ways of keeping score, and Jordan kept score on everything because that was what the most competitive guy in the history of games was supposed to do. That’s why he lorded over not just basketball but the entire sports world year after year, winning scoring title after scoring title and carrying his Bulls to six NBA championships.

When I think of Jordan, I like to remember that pre-season in 1996. He had just carried his Bulls to a 72-win season. He was about to turn 34 and could have easily packed it in and ended all the maniacally hard work. But he wasn’t done with his greatness, even though others around the league were smelling opportunity.

“I’m going to send Mike home this year,” Shaquille O’Neal had promised me that pre-season, a threat that would ring as empty as all the others.

Told of O’Neal’s boast, Jordan smiled and quipped that if Shaq planned on doing that he better practice his free throws.

O’Neal, of course, was like a lot of other NBA stars that year. They had had enough of Jordan’s domination and the humiliation. They wanted it to end.

But he had a wellspring of competitiveness, deep as a Saudi sheik’s oil reserves, vast as the space between Dennis Rodman’s ears.

Yes, Jordan had already done it all by the end of the 1996 season, but his effort and success over the next two campaigns would simply astound.

He served notice in January 1997 with a 51-point game against the New York Knicks and his league-leading 30.9 points per game scoring average. There have been a couple of dozen people fortunate enough to score more than 50 points in an NBA game. Wilt Chamberlain, in fact, accomplished that feat 122 times. But no one had accomplished the feat as late in life as Jordan. Most players hit 50 points as young superstars. Wilt’s magnificent run of big games ended when he was 32.

While he had begun to show his age, Jordan had shown no signs whatsoever of backing down. He still wanted to rule.

“I want to be consistent every night,” he explained as the 1996-97 season opened. “I want to step on the court and accept every challenge.”

Being consistent sounded nice, but it was a gigantic challenge when you’re the king of the NBA hill, because it meant fighting through the physical defenses night after night in an age when the NBA allowed very physical defense; it meant overcoming the daily pain and the nagging injuries that accompany age. Yet even there, Jordan forged an edge.

“Between games, Jordan can bounce back from injuries that would sideline other players for weeks,” Bulls trainer Chip Schaefer pointed out. “He has a remarkable body.”

“At my age, I have to work harder,” Jordan explained. “I can’t afford to cut corners.”

And so, now, as he prepares to enter the Hall of Fame in the grandest introduction ever, I feel mostly sadness. This is it, the final reality is settling in.

I interviewed him last year during the pre-draft camp in Orlando as he watched a crop of college players try to impress NBA executives, and I remember feeling sad after that talk too and thinking he was born to compete, not to sit around bored, studying lesser beings.

In the end, I’m just like that 12-year-old kid with the bad marker. I don’t want to see him writing on air. It’s very hard for me to think of Michael Jordan as a relic.

I just wish he could play forever.