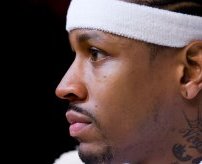 Allen Iverson was humbled Wednesday having to sign with a team that will struggle to win 30 games next season. Iverson signed a one-year deal for 3.5 million with the Memphis Grizzlies and what we should take from this is a resounding yell. No one is bigger than the NBA and this league can humble you quickly if you’re perceived as a potential problem.

When Iverson finally retires from the NBA, he will go down as the toughest and most durable player for his size in the history of the game. I honestly thought that Iverson would last less than 10 years because of the way he threw his body around. He will make this upcoming year his 14th and at 34 years old, he is still one of the best conditioned players in the league. The 27 points he has averaged in those 13 seasons are as gaudy as it gets for a big-time scorer, but you also can’t ignore the fact he has averaged 2.2 steals and 6 assists. Those numbers will definitely put him in the Hall of Fame when he decides to leave the game.

There is one stat attributed to Iverson that quite honestly cost him an opportunity to sign with a contending team and most likely will cause head coach Lionel Hollins some migraines during the course of this upcoming season… That statistic is under the minutes column. Iverson has averaged an insane 41 minutes a game through his career. He has only averaged less than 40 minutes per game twice. Michael Jordan, arguably the greatest ever, averaged over 40 minutes only three times and that was early in his career.

This stat is mindboggling. Iverson has probably run the longest distance of any NBA player over the last 13 seasons. Now I assume readers are wondering, why this stat is the cause of Iverson not getting a better opportunity? Well, I can pretty much surmise that if we polled every coach that Iverson has played for, they would say they’d rather have played AI 35 to 37 minutes instead of 41.

Playing Iverson 36 minutes a game would have given a role player a chance to prolong his career, given a coach a chance to share the ball and satisfy some of Iverson’s teammates. But most importantly, it would have saved some miles on a guy that plays at 100 miles per hour. Sitting Iverson just five extra minutes would have shaved off 4,430 minutes, which is basically a year and half.

Here is the easy question… Why did they play him that many minutes? The obvious reason is that Iverson refused to come out of ball games without a fight. He imposed his will and desire to play each and every minute on every coach that he has had and now that has stopped him from being courted by the contending teams.

I wish that at least one coach had dared to stand up to him and gotten him use to playing less minutes, because there are numerous teams that could use Iverson in a sixth man role. I understand the mentality and I definitely fought off the decision of Utah assistant coach Phil Johnson to move me to the bench a quarter of a way through my career when I was a member of the Sacramento Kings. I was playing 36 minutes and all of sudden it was cut to 30. I thank Phil to this day because it allowed me to play 17 years and still have solid production, but most importantly it taught me the importance of understanding what it took to play a role and not have to be the star.

Playing a role is foreign to Iverson. He has always taken all the shots and secured almost every minute at his position. Contending teams like Boston, Orlando, Cleveland, Lakers, Spurs and Dallas could all use a player the caliber of Iverson in a 20-minute-take-plenty-of-shots role. That way they could control his off nights by just sitting him down. What scared most of these top teams is that Iverson would pout and become a serious problem on and off the floor if they sat him for a prolonged period during game.

Iverson should use this year to prove to all the contenders that he will be willing to back up OJ Mayo and Mike Conley. That he would be willing to mentor and show leadership and become a top sixth man candidate if given the chance next year in his 15th season.