Nets have no interest in Rider

Nets have no interest in Rider 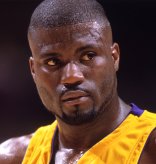 NBA veteran Isaiah Rider might be trying to return to the league, but it won’t happen with the Nets. New Jersey has no interest whatsoever in inviting the notorious Rider to training camp, a Nets executive told HoopsHype.com. Rider’s agent John Lee had told the Minneapolis Star-Tribune otherwise on Thursday.

Rider, 38, has not played organized basketball since the Denver Nuggets took a gamble on him in the 2001-02 season. In the last four years, he has been arrested five times.