As usual, the referees are out there alone

As usual, the referees are out there alone 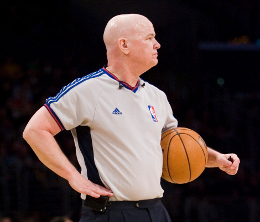 It was a great summer for the NBA, with all the controversies and scandals involving other sports. Even if David Stern can’t come out and say it, thanks, Manny Ramirez, Brett Favre and Plaxico Burress.

Of course, peace is a transitory state in any league these days, and the NBA isn’t just any league.

The era of harmony just ended officially, with Stern locking out the people he has always praised for upholding the integrity of the game.

Unfortunately, there are priorities. The league’s negotiations with its referees are a small, but  significant part of a bigger picture, involving the ongoing talks to renegotiate the deal with the players.

In other words, who needs integrity, at least for the first month of the season?

(Those of you who think the NBA has no integrity to uphold, which includes so many players, coaches and fans, should stop reading here. If I thought the NBA was fixed, I’d ask to cover something that wasn’t. At least, coaches and players are well paid for the screwing they insist they get but any fan who thinks it’s bogus and still watches will have to supply his own reason for wasting his time.)

To cut to the chase, there are only two possibilities:

1. Stern locks out refs, starts season with replacement officials, or scabs, puts up with the sturm und drang from even-more-horrified players, coaches and fans as long as he can, and makes a deal.

I’d say that would be Thanksgiving, at the latest.

2. The refs figure out they’re in a world of trouble, make the best deal they can, and start the season.

Since the two sides are reportedly less than $1 million part for the overall package – total – it will take a lot of bad will in the  meantime to keep them from making a deal. Stern has spent the last three seasons, throwing his chunky body in front of the refs to protect them from all the slanders in the wake of the Tim Donaghy scandal.

As if that matters now. This involves bucks, and not just the tip money the refs take home, relative to the enormous NBA revenues. In a bad coincidence, the refs’ contract has run out 16 months before the NBA’s option to terminate its deal with the players… in the wake of the worst economic crisis since the Great Depression… with league revenues projected to dive and Stern seeking major givebacks.

With Stern and Players Assoaciation Director Billy Hunter already talking about a new deal, the commissioner isn’t about to cut his refs a break in the meantime.

Hard-nosed as he is, Stern is actually known for maintaining labor peace in a turbulent era, with only one stoppage while the NFL, baseball and the NHL are in double figures, if you add them all up.

Of course, before signing the peace treaty, Stern is more like Jimmy Breslin’s characterization of President Eisenhower’s secretary of state, John Foster Dulles:

That’s not enough of a difference to quarrel about, but watch them do it anyway, right up to the start of the season.

Stern, in a more conciliatory mood before talks with the players in the ‘90s, labeled himself “Easy Dave,” but he hasn’t said anything like that lately.

This is Stern in his Judge Dredd incarnation, welcoming McMorris, who’s in his first negotiation with Little Big Man to the NBA.

As hard a time as this is for Morris, his officials, at least, know they have to give up something. In Hunter’s first negotiation in 1999, Stern locked the players out for half the season and came close to shutting the whole circus down.

Personally, if I was a referee – even to a sportswriter in today’s challenging environment, it doesn’t look inviting – I’d take the short money and try to get a short-term deal, say, three years. By then, the economy may be better, and the players will have a new contract (presumably).

With entry-level refs getting almost $150,000, we’re not talking about blue-collar guys trying to feed their families. Actually, the refs are as blue-collar mentally as cops, performing a task even more thankless. In terms of relative contribution and the talent and the toughness needed to do the job, refs are the game’s most underpaid people, relative to owners, players, coaches, and top league administrators.

Unfortunately, this isn’t the year the refs are going to redress that injustice. In the only silver lining available, they’re about to become even more underrated than they already were.